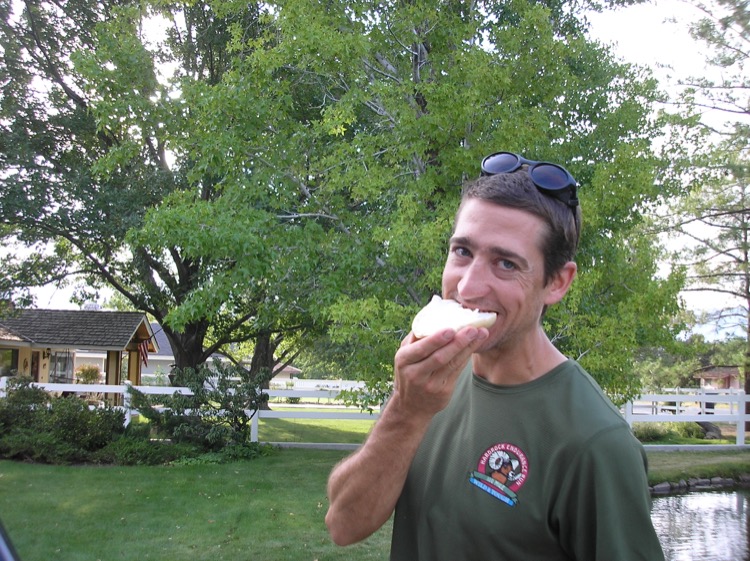 Phil Kiddoo fueling for another 'Day In The Life' on foot. Photo: Jeff Kozak

“The car is our wheelchair…” – ‘Testify,’ Rage Against The Machine

There’s a guy in spandex lying face down in a dry irrigation ditch as a roaring south wind strafes the air just above him with a powdery alkali-dust ripped off the 4,000’ floor of the Owens Valley, the “Deepest Valley” that lies just east of California’s towering 14,000’+ Sierra Nevada along the tumbleweed-choked western fringe of the granite behemoth’s expansive rain shadow. From a distance he looks lifeless, but his reality is quite the opposite; a brief reprieve from the duststorm is all he seeks in his out-of-place prone position.

It’s not an even remotely appealing December day for a 60-mile long run from Bishop to Lone Pine, but, by his calculations, he doesn’t really have much choice if he wants even a fighting chance to emerge victorious in his self-imposed mode of transportation battle. The only thing thicker than the dust in the air is the irony. He works for the Great Basin Unified Air Pollution Control District, and this is the first leg of an unexpected work trip commute to Los Angeles, the city responsible for the concrete straw that parallels his path, and to some extent, the dust that fills the air with a particulate matter that predominately defines Phil’s job description. His boss will pick him up in Lone Pine the next day and he will finish the trip like a normal carbon-based society citizen: in a car. 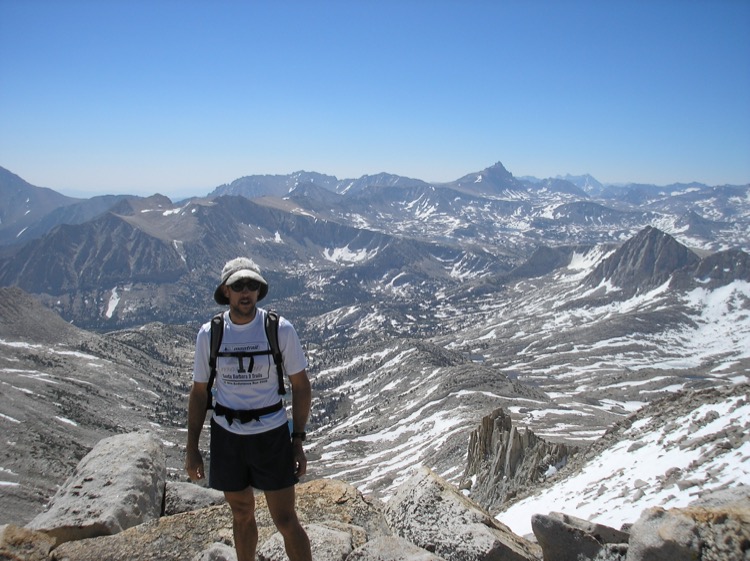 This was not the first time that Phil Kiddoo’s attempt to cover more miles on foot than in vehicle during a calendar year was coated with the incomplete combustion of an ironic and indifferent universe. The 2008 wildfires that cancelled the Western States 100 left him with an unwanted rollover decision: Do I run the race despite the fact that I will accrue significantly more vehicle-than-foot miles? He had all but decided to skip it when the tried-and-true peer pressure ‘You’re an idiot if you don’t. You might never get in the race again’ admonition of a cousin found him on an Eastern Sierra Transit bus in late June with its odometer ticking northward toward Squaw Valley. Courtesy of several wooding trips in May he was already 238 miles in carbon debt, despite a nearly 300-mile cushion at the end of April, and the race trip threatened to put him too far in the hole to realistically make up the difference.

The idea came to Phil while reading Katie Alford’s book Divorce Your Car. Was it really possible in the modern world, with a fairly typical life of family and career commitments, to use the feet more than fossil fuels to get around? It sounded like a life adventure worthy of an attempt and, the truth was, as a longtime ultrarunner (Phil has an 18:33 12th place ’05 Western States and a 30:53 7th place ’07 Hardrock, among other solid performances over the course of 14 years), he had always thought it somewhat ridiculous how many miles he drove simply to go for runs. 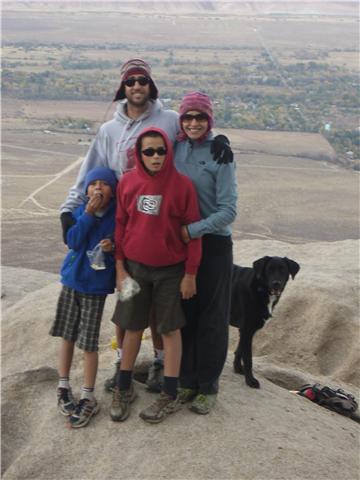 “Dad, when will you be able to drive again?” The Kiddoos, on a family hike in The Druids, above Bishop.
Photo: a Kiddoo

Walking, hiking and running miles would all count for. Any motorized miles, whether driver or passenger, including public transportation, would count against. Biking miles were neutral, as were horses and mules though saddle soreness was never a factor. His Garmin GPS was all but permanently attached to his wrist, the light-skinned watch outline a sort of symbolic tattoo of the data tracking obsessiveness required. His wife, Brenda, was on board with full support, with one significant exception: If this results in crazy making in the household, running man game over. Domestic rules established. Game on!

On New Year’s Day, I, and some mutual friends, met Phil out at the Fish Slough for our standard flat half-marathon route. He ran there and back from home for a 50k day. “I wanted to get a jump on mileage early on because I knew there would be unavoidable driving throughout the year.” His 409/204.2 foot/motor totals in January attested to a successful mission launch.

The ‘crazy’ ended up being mostly in Phil’s own head, especially as the year grew long, such was his determination to succeed, and in his occasional encounters with bewildered others as he maneuvered his overloaded-with-groceries-or-house-project-supplies bike trailer around town. One evening after work, running home from the hardware store in the dark carrying a freshly purchased axe, a patrol car with a very inquisitive-looking policeman drove by at a suspenseful crawl before disappearing down the street.

After bottoming out nearly 300 miles in the hole as September closed out another Eastern Sierra summer, an impressive zero motorized miles in October and a lofty November running mileage brought Phil 85 miles in the clear with one month to go. Then, the boss came knocking with that unavoidable work trip.

“I calculated the driving mileage differentials based on various run distances, combined with my mileage cushion, and the fact that I could probably force myself through 100 mile weeks to end the year, and came up with the run to Lone Pine idea.”

It worked, with some of Mother Nature’s atmospheric sandpaper, and several desperado ditch sessions tossed in for good measure, as Phil celebrated New Year’s Eve with +19.7 miles on foot for 2009. But the physical and emotional toll of forced running through the normal downtime of the holidays set the tone for minimal running in a new year kicked off by immediately going on a family vacation road trip to Death Valley.

Throughout the year, Phil’s perspective on his immediate hometown surroundings changed. “Your world certainly shrinks when you no longer allow yourself to hop in your car at every whim and take off down the road, whether it be to a trailhead or the store.” This paid unexpected dividends though. Your world as a whole may shrink but new ones open up at speeds significantly below the legal limit. You see things you’ve probably never noticed before. The commute to work, the bike ride to the store, or any other mundane daily activity all take on a fresh look and feel when you slow down to a human-powered pace. It’s the exploratory version of thinking global but acting local.

And, who knows? If we kept at it long enough our own neighborhoods might begin to feel as vast and full of possibilities as they did when we were kids.

I love this article!

Do you know the guy it’s about? Ha! Thanks, Arnie! – Jeff