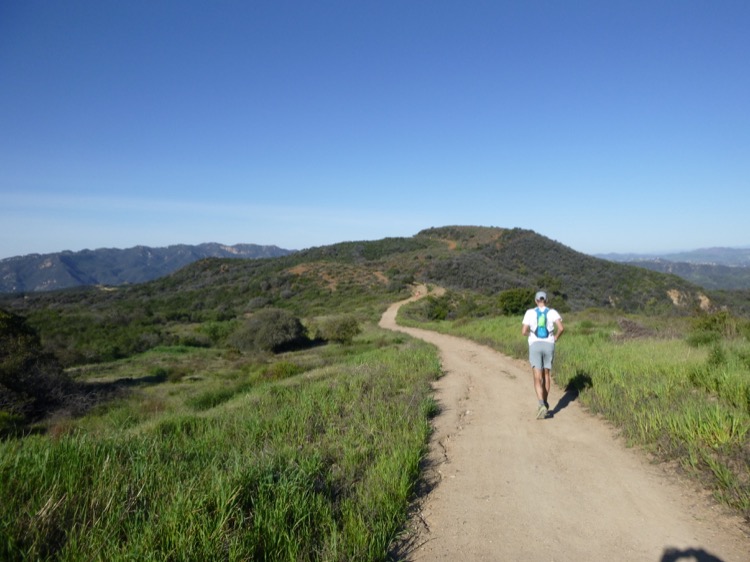 Just fully completed in 2016, the 68-mile-long Backbone Trail in the Santa Monica Mountains of Southern California’s Golden Coast has been designated a National Recreational Trail and offers a unique and stunning venue for the Coyote Backbone Trail Ultras.

Starting at the Will Rogers State Historic Park just a stone’s throw west of where the Los Angeles basin explodes into one of the world’s great cities and meandering east to west through Malibu Creek and Point Mugu state parks, it finally turns south to the Pacific Ocean ending at the Ray Miller Trailhead just off the Pacific Coast Highway. These are exotic names for an exotic race.

The course follows ridgelines of exposed rocks, thus the name “backbone,” traverses chaparral-covered hillsides, winds through oak forests, crosses Mulholland Highway and Malibu Canyon Road, dips into grassy valleys, and mixes stunning vistas of mountains and ocean with glimpses of the lifestyles of the rich and famous. Luxurious hilltop mansions look down on the course from the ridgelines and there are fancy estates below in valleys filled with guesthouses, swimming pools, tennis courts, and vineyards. 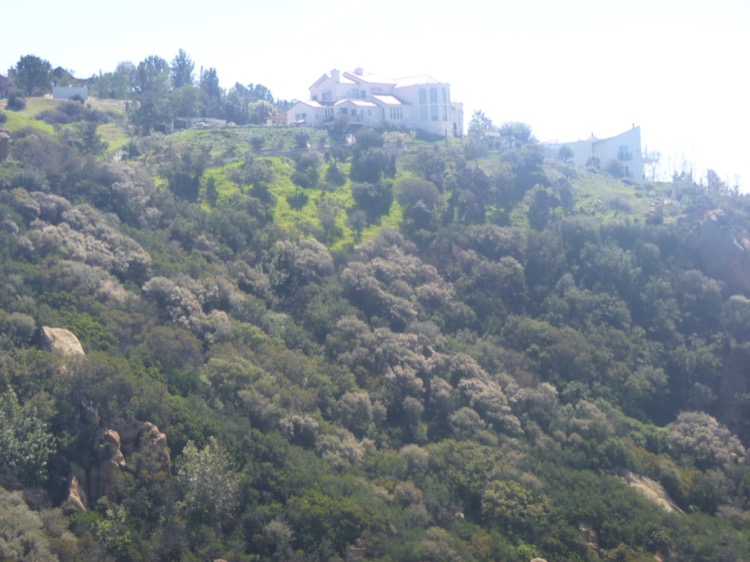 The final four mile descent out of a canyon toward the Pacific through a moonlight-drenched landscape is as spectacular an ultra finish as you are going to find and worth the price of admission right there.

The aid stations along the Backbone Trail were massively helpful and took some of the sting out of what was a fairly rugged and challenging course. Certainly no one was going hungry with an offer at one aid station for a custom cooked breakfast burrito or a huge bowl of delicious beef stew available at one critical aid station that I would have been happy with sitting in a restaurant in Santa Monica. 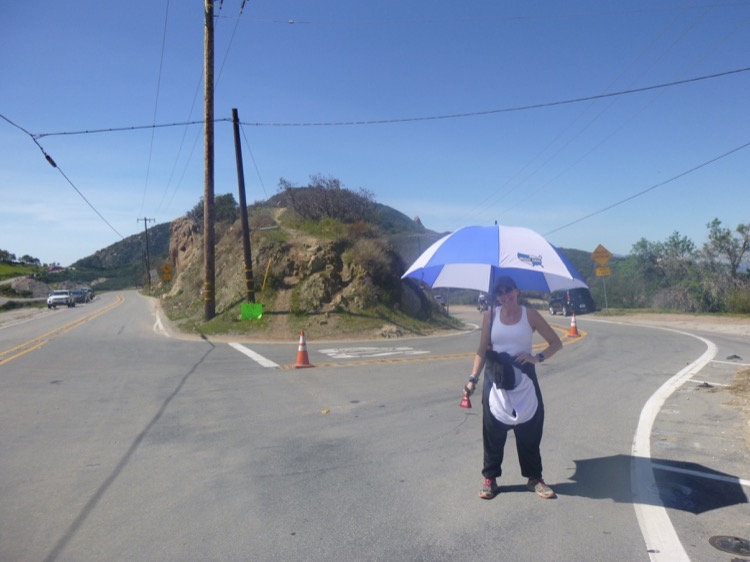 We enjoyed moderate temperatures this year. It’s good the race is held in mid-March. A hot day on that trail would be very punishing. Runners had the option of taking a straight shot along the entire Backbone Trail for a 68-mile race or completing a new 100-mile distance. Everyone started together and followed the course for about 60 miles to the Danielson Ranch aid station. The 100-milers broke off from there to do three punishing loops in Point Mugu State Park that returned to Danielson Ranch before following the same final eight mile trail to the finish as the 68-milers.

The original 68-mile race is a not-to-be-missed classic. The Backbone Trail is awesome from start to finish and a generous 27-hour cutoff allows runners of all abilities to enjoy their day and then experience the magic of running through the night to the finish. There was a problem though with the inaugural 100 mile distance. It’s certainly a great course, and the 30-hour cutoff at the finish would have been tough but reasonable for mid- to back-of-the-packers, but the interim cutoff times at Danielson Ranch were too rigorous by almost three hours. Consequently, only five runners out of more than 30 starters were in time to attempt the three loops for the 100-mile distance. Runners were allowed to officially drop down to the 68-mile race, which was some consolation, but there’s no doubt that several 100-milers could have made the final 30-hour cutoff if they had been allowed to try. 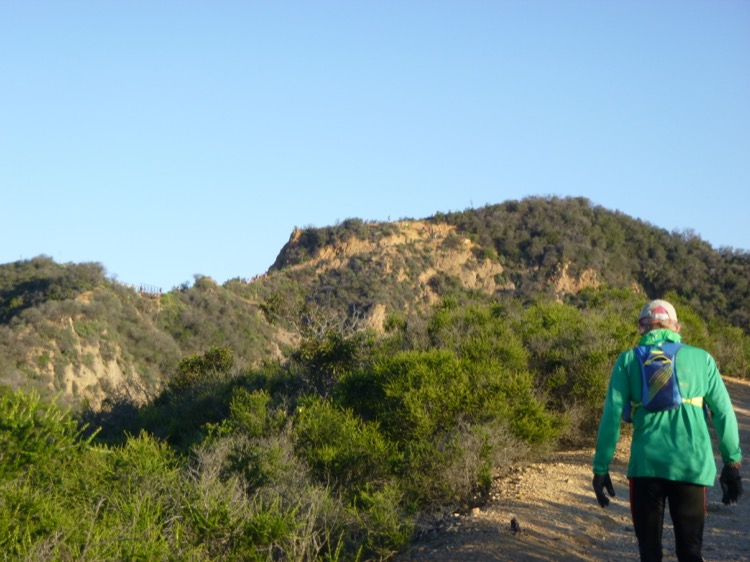 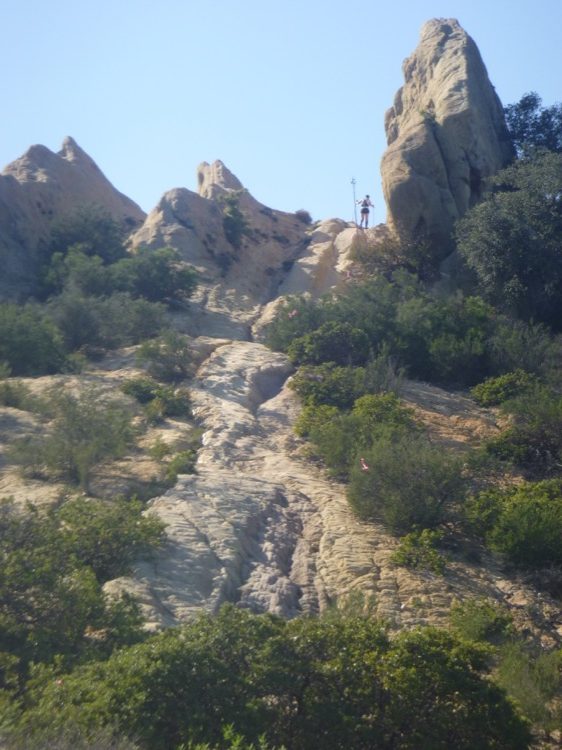 Make this race part of your vacation plans. You have the greater Los Angeles area next door to enjoy during your stay, but there is plenty to do close by. Take the Malibu Stars’ Homes Tour and don’t miss the Getty Villa. It’s an exact replica of a villa near Pompeii. Just don’t confuse it with the Getty Museum proper located in Los Angles at the Getty Center. Visit spectacular Zuma Beach in Malibu and look for movie stars posing in the sand, or make your way over to Santa Monica, take in the beach there or spend the day at the Third Street Promenade where you’ll find street performers, world class shopping and endless restaurants, all pure Southern California.

Next year, if you sign up for the 68-mile, you are more than good to go. Before signing up for the 100-miler, though, I would call ahead and ask if they are planning on adjusting the cutoff times at Danielson Ranch. If not, you better start training your butt off.

The BBT68 is a low-elevation Wasatch, a course that mocks the smugness of “Cali Carpet-Trails” jibes heard periodically. BBT68 winner Jeff Browning ran it as if it was paved. His 11:38 FKT is refreshing because a disinterested 3rd party was running the timer. Also note that the BBT100 only had 5 finishers, as the cutoffs were mega-serious. RD’s Howard Cohen and Mike Epler threw down a challenge, and many weren’t up to it. This is a reminder of what a tough 100 has to offer, in a time when many buckle-chasers drawl “I’m gonna do a hun-doe…”﻿