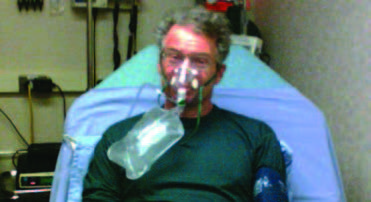 One great thing about our sport of ultrarunning is the variety of places and conditions that we have to choose from when we sign up for a race. Running 50 or 100 miles is awesome in and of itself, but when you combine the distance with all the fabulous locations, the vagaries of weather, the varieties of trail types, and the ups and downs of elevation change, you get a sport that will keep you enthralled for as long as you keep putting one foot in front of the other.

One condition that you’re going to run into, sooner rather than later if you do a lot of ultras, is altitude. Many, many ultras are staged in the mountains, and of course, many of the classics include altitude as a major factor in the race. Think the first part of Western States, most of Wasatch, all of Leadville. So it’s important to have an understanding of how things are going to be different once you start getting up over 6,000 feet and into what is considered high altitude: 8,000 feet and above.

First of all, your capacity to run is going to be diminished by the reduced level of oxygen in the air. Your heart will pump faster and your breathing rate will go up just trying to compensate. It’s believed your ability to do work is diminished by about 3% for every thousand feet you are above 5,000 feet. That would mean when you show up to run at Leadville, which has an average elevation of 10,000 feet, your ability to run has been cut by about 15% while you’re still walking around town shopping for souvenirs.

The classic remedy for this reduction in capacity, if your goal is to perform as well as you would at sea level, is to spend enough time at altitude before the race to fully acclimate to the conditions. Full acclimation, though, requires from two to three weeks. Having that amount of time to devote solely to prepping for a race is a stretch for most people. Thirty time Leadville 100 finisher Bill Finkbeiner, who notes that his job doesn’t allow him to go out early to Leadville, takes advantage of the fact that there is a window of a day or two when you first arrive at altitude before your body begins breaking down and then adapting to the thinner air. Many runners travel to altitude the day or two before the race and then simply accept that they will produce a slower time and feel worse than if they were down at sea level. Finkbeiner reports that he usually expects to run Leadville about two hours slower than Western States when he does both races in the same year.

Another technique for preparing for the physical discomfort and mental stress that comes from running at altitude is to train intermittently at altitude as your schedule permits. Some mountain ultras, like those in the Wasatch Range or Sierra Nevada, are a two- to four-hour drive from major cities, which can facilitate this strategy. Getting up to the mountains for long training runs in the three to eight weeks prior to the race can pay big dividends come race day. Likewise, training hard at lower elevations and then recovering over the weekend up “high” has also been known to aid sea level runners in adapting to altitude.

Yet another option for dealing with altitude is to rent a hypoxic generator and a specially designed tent that allows you to sleep in an atmosphere of reduced oxygen. By gradually diminishing the oxygen content of the air in the tent over a three week period, you allow your body to adjust to the low oxygen levels that you’ll encounter up high while you’re still at home in Kansas City. I tried this once and it worked well. I got to my race a couple of days early and found I could hike and run without feeling the usual breathlessness and strain. The downside is that the rental is not cheap, and it’s a lot of trouble to rig up the bed inside the tent. Also every morning my cat would scratch on the side of the tent until I let her in. So be sure to rent the tent and equipment that comes without a cat.

With proper acclimation, you may be able to avoid the most common affliction at high altitudes: acute mountain sickness or AMS. Common symptoms of AMS are similar to what you might experience with a bad hangover, that is, a headache, fatigue, loss of appetite, nausea, and possibly vomiting. Having some degree of AMS is fairly common and not particularly worrisome. Resting or cutting back on your exertion usually helps. You can take a standard painkiller for the headache.

A much more serious high altitude condition is High Altitude Pulmonary Edema (HAPE). HAPE is a condition that some people are just prone to that leads to excess fluid building up in your lungs when you are exerting yourself at altitude. Symptoms include shortness of breath, swelling in extremities, a rattling sound in the lungs, and coughing up material from the lungs. The treatment is to get down from altitude as quickly as possible and administer oxygen. While AMS is mostly just unpleasant, HAPE can progress to the point where a chariot swings down from heaven and releases you from your earthly existence. Since that is not how you want your race to end, it is important to monitor your condition when at altitude. The good news is that HAPE is not very common; the bad news is that if it does happen to you, it will very likely happen again in similar conditions, so you will either need to avoid high altitude running or work with a physician to explore some of the methods used to prevent HAPE.

High Altitude Cerebral Edema (HACE) is a swelling of the brain caused by excess fluid that can also lead to the chariot scenario. It is rare and generally more associated with greater altitudes, such as 13,000 feet versus 8,000 where HAPE seems to present itself. The symptoms initially are similar to those of acute mountain sickness but the sufferer can progress to confusion, loss of consciousness, fever, a rapid heartbeat, lethargy and nausea. As with HAPE, rapid descent to a lower altitude and the administration of oxygen are critical.

Chances are good that you will not be prone to one of the more serious high altitude conditions, but you should certainly be prepared for not feeling your best when you run a race at altitude. Prior to your target race, do try to travel to altitude and do some running so you get acquainted with how you are going to feel. During the actual race, keep your expectations low in terms of your finish time. Remember the same level of effort and suffering at altitude, versus running at sea level, is going to produce a slower time. On the other hand, be confident that you can deal with the conditions and keep going. Your endurance training, stamina, and determination will get you to the finish line, even if you don’t feel like a million dollars.

OK, this has been on my mind for years now. The altitude/oxygen story. Dr. Daniels has stated that the level of oxygen in the atmosphere is the same at sea level as it is at 10,000+ feet, what is different is the air pressure pushing the oxygen into your lungs with each breath. Others say there is less oxygen. Which is it? Not that it matters, altitude has its effects no matter which situation it really is.