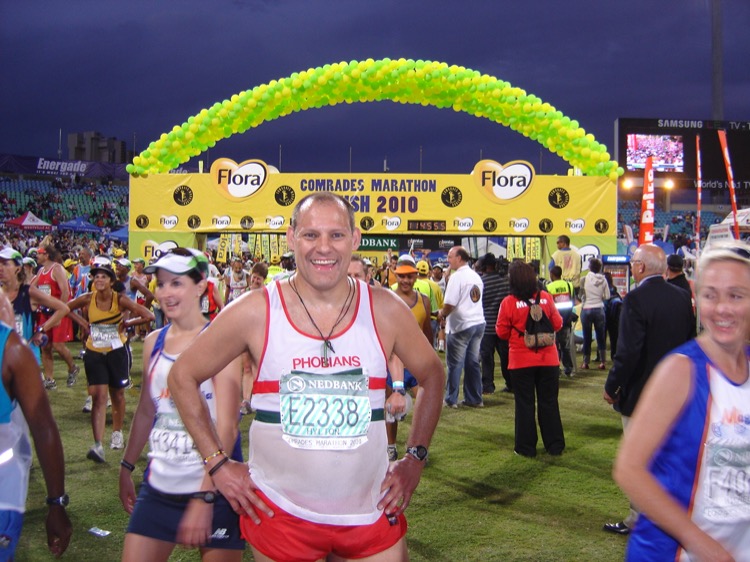 The Comrades Marathon has been an utterly life-changing event in my life for so many reasons – all of them extremely positive. They say that “life is what happens while you make other plans.” I could never, ever have imagined all those years ago just how huge a part of my life the “Big C” would become. And especially not that my brother Rowyn (we ran 15 Comrades together), would one day become the current Comrades Marathon Race Director!

Amazingly, I initially took up running just after finishing school as I was asthmatic and was told it would be “good to exercise my lungs.“ Well, it worked, and apart from a few sports injuries along the way, I have quite literally not been sick or needed to see a doctor again for the past 30 years – something for which I am hugely thankful every single day. The unwavering support of incredible brothers and parents, and many club-mates and fellow runners around the world has also been instrumental in getting me to the Comrades start line each year.

There are a number of things that, even nearly 30 years later, I still remember from my first race on 31 May 1986 (Down Run) as clearly as if they had been only yesterday :

1) The “ignorance is bliss” apprehension-excitement of not actually realising just how FAR 90 Km really is!
2) The huge media build up of Bruce Fordyce very possibly becoming “Six-dyce” after five consecutive wins.
3) Max Trimborn’s “cockcrow,” “Chariots of Fire” booming, and all the banners at the start in those days.
4) Standing next to Dave Rogers at the start – he already having about 10 more Comrades medals than I had years alive that day!
5) Finishing in absolute agony in 9h51 in Durban – it remains to this day the only day ever in 30 years of running that I ever suffered from cramps – all the way from Drummond to the end!

But, like so many others, I had to at least complete an Up Run too, so back I came in 1987, and ran the entire way with Rowyn – on his first journey – a very special day indeed. 1988 and 1989 were memorable due to Wally Hayward’s two amazing finishes at age 80, and also Sam Tshabalala’s 1989 win ending Bruce Fordyce’s incredible streak of eight consecutive wins.

Row and I both kept running each year, and then in 1991 youngest brother Kelvin completed his first (and last) Comrades – once again a truly unforgettable and special day getting “full-house” for family James. All three of us now have our plaques next to each other on the Comrades Wall at Drummond. It was also memorable due to Frith van der Merwe’s incredible 15th place overall.

Two medals became five – and suddenly a possible green number started looming. Although I always preferred the Down Run, my Personal Bests run in my first 10 years were interestingly very similar, at 6h58 (Up) and 7h00 (Down).

Being presented my treasured Green Number 2338 by the great Wally Hayward in Durban in 1995 after five Ups and five Downs remains one of my happiest moments ever! Rowyn earned his Green Number 1024 the year after.

The massive field of about 24,000 in Millennium year 2000 was also hugely memorable. Unfortunately, so was the cut-off time change in 2003 to 12 hours – mainly because after an injury-prone year, I finished the 2002 Up run in 11h02 – and experienced the crushing disappointment of watching the cut-off gun being fired less than 100 metres ahead of me, thereby ending my streak of 16 consecutive finishes. But that is what makes Comrades the greatest running event of them all – and I couldn’t wait to get back the next year…with an extra hour in hand from 2003 onwards.

At the London Marathon

My “double-green” 20th finish came in 2006, but a stress fracture in the Copenhagen Marathon in 2008 (a mere six weeks before Comrades) put paid to that attempt. And most recently, the irony of a serious football injury and surgery has ruled me out of the past two races – but I’m rearing to go again and determined to be on the start line in Pietermaritzburg again on 29 May this year!

It is largely in training for the “Big C” each year that has now taken me to 167 marathon finishes on six continents, via 81 countries, and counting.

Having completed the ‘Dusi canoe race from Pietermaritzburg to Durban, and also cycled the Pietermaritzburg to Durban route, as a Private Pilot I simply had to do the route a fourth way – so had the thrill of flying myself down the route at low-level on one occasion. That is how special the Comrades route is to me – and that is the day I got a bird’s-eye view of how darn steep the “Big 5” Comrades hills really are! Every hill has its own character and mystique, and there are so many places and features along the Old Main Road route that evoke memories, stories, and respect (such as Arthur’s Seat), too many to mention here. Running through the disabled (yet always happy and excited) children as they line the route at their Entabeni school brings a lump to the throat every time, and the Kearsney College schoolboys cheering you on at the top of Botha’s Hill are always a welcome sight. I only ever managed to run the entire race non-stop once – but I remind the dreaded Polly Shortts mountain of that fact every time I now walk up it!

It was also most definitely the tenacity and determination that Comrades (and numerous IronMan Triathlons and UltraMan events) instilled in me that drove me to pursue a different challenge (a bitterly cold one at minus 50 degrees C!), and I proudly became the first African to ski-race to both the Poles (North Pole, 600 Km in 2005 and South Pole, 1,000 Km in 2009). A picture of the Phobians club banner at the South Pole hangs on the Phobians clubhouse wall in Pretoria, and my 1988 “Up” and 1991 “Down” Comrades Silver medals were also with me as I reached the South Pole after six tortuous weeks on 26 January 2009! Having lost nearly 40 Kg in weight in Antarctica, it was no surprise that I completed my 2009 Comrades nearly 2 hours quicker than the 2007 Down Run!

At the South Pole

At the North Pole

Instead of a mid-life crisis in my 40s (ok, well, one less crisis anyway), the discipline, health, and fitness gained as a direct result of Comrades training also enabled me and six mates to cycle 4,000 Km from London to Sicily in the past couple of years – which in turn helps keep me fit for Comrades in spite of the celebratory whiskey each evening after a hard day’s cycling. Other interests include SCUBA diving, skydiving, snow and water skiing, hiking, canoeing, white-water rafting, charity fundraising and motivational speaking – but my greatest passion will always be for Comrades!

I could write a book about this great race, but it still thrills me to be on the start line every year. Currently living in London, and still travelling extensively in the world, it does not matter which world city I am in when I hear “Chariots of Fire” playing and I am instantly transported to the cool, dark, nervous yet excited morning of the Comrades start line. It gives me gooseflesh every single time! With age 50 having crept up on me in 2016, and 27 Comrades finishes, I definitely still hope to get to 30, maybe even 35 finishes in time – and definitely want to be part of the 100th edition in 2025!

The days of PBs are behind me, but I love nothing more than encouraging any others I meet, passing on a few tips, and a whole lot of stories – especially to novices running their first Comrades. This great race has been alive for decades longer than I have been, and will still be alive for many decades after I have gone. I defy anyone, anywhere, to find an event that inspires greater camaraderie than the Comrades Marathon – Up or Down. Running, Sport, Fun, Friendship, and Achievement are all winners every Comrades Race day.

Your enthusiasm comes through loud and clear. Thanks for being such a wonderful ambassador of the sport and specifically, Comrades. I hope to get into my first “Big C” next year at the tender age of 58. Run on Hylton…