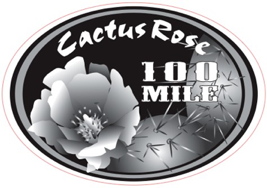 Cactus Rose celebrated her 8th anniv with a warmer than usual attitude, providing her usual stabs and barbs, a slice here, a cut there, until the entire field of party goers were bleeding a trail down her path. As Lynn Ballard puts it, ‘The Cactus, she cuts you up… and gets in your blood’. And so she has attracted a cult following that continues to grow. Her personality is masochistic, with washing machine moods, and rock throwing tantrums that aim for your toes. Still, we all love her so terribly much. This year, we had 86 100 milers, 124 50milers, and 15 4-person relay teams, and they all start at the same time, running the same 25mi loops.

In the 50 miler, Matt Smith went after it from the start in a pack with Steven Moore and a couple of relay team runners, and slowly separated from the others to complete the 1st 25mi loop a few minutes before a small group. He held on for the 2nd and final 25mi loop to win in 8:03:38, with Steven finishing 30 mins back in 2nd with a 8:33:30. Brandon Ostrander took 3rd in 9:30:06. Nicole Studer & Melanie Fryar ran together for more than a few miles, but it was Nicole who came in 1st after the 1st loop with Melanie 5 minutes back. Nicole continued running very well to win the women’s race in 8:03:38 and 2nd overall, while Melanie finished 2nd in the women’s race in 8:44:37 and 4th overall. Laura Buitron of Spain finished 3rd female in 10:19:28.

The 4x25mi Relay teams had a battle going on between the top 2 teams from the start, with ‘Trail Roots Turtles’ completing the first loop with a 5 minute lead over ‘Wendling the Swift Phenix over the Terranova’. Loop two saw a major reversal though, with Wendling taking back the lost time and a lot more, to provide the 3rd leg a 50 minute bump. This trend continued on the 3rd leg with another major gain to increase the lead by 2 hours. The final runner for Trail Roots ran the fastest loop of the day, but the gap was already too big. Wendling won in 16:32:40, to Trail Roots 17:43:52 in 2nd, with Texicans 3rd in 20:33:28.

Great race right in my backyard. Nicole is a tremendous runner and was just named Women’s Ultra Trail Runner of the Year by USATF’s MUT Council!