Badwater Cape Fear is like no other ultra-race around. First, there’s the logistical challenges to travel to Bald Head Island, North Carolina, which depending where you are coming from, typically involves planes, shuttles, ferries, and trams. Once you’re on the island, golf carts, bikes, and walking are the modes of transportation. The leave-your-car-behind aspect of Bald Head Island creates a special dynamic that while care free, involves conservative packing to and from the island. Beyond that, with no hotels on the island, runners rent houses that they share with other runners, creating a sleep-away camp atmosphere with everyone living together for the weekend. If you know Chris Kostman, Chief Adventure Officer at AdventureCORPS, Inc., you know this is right in line with one of his driving forces – to create community amongst the BadwaterFamily. With Badwater Cape Fear, he succeeds in doing just that: living and running with new and old friends for a weekend leads to laughter, camaraderie, and enduring friendships.

This was my fourth time heading back to the race. My first three times on the island I completed the 51-mile distance, while this year I signed up for the 50k distance, because I committed to myself that 2019 would be the year I tried new things versus repeating the past. 2019 also marked my first year not traveling from Florida with my Florida ultra-running comrades, but from DC, where I now live; additionally, my father would not be joining me this time – a mix of complicated travel and deciding to sign up at the last minute and securing a room in Bob Becker’s already-full house.

When I made it to the ferry terminal in Southport, North Carolina on Friday, Cape Fear roommate Lisa DeVona was there, and soon after housemate Dr. Beth Cazenave showed up. With hours to spare before our ferry arrived, we all sat and talked. Somehow, we missed our first ferry, but were able to get on a later ferry, which turned out being very convenient considering that house mates Cindi Lamb, Tuan Nguyen, and Joe Delazzaro were also on the next ferry, which meant we were able to take the tram together to our island house, “Marsh Onward.”

Sharing a house on an island with new and old friends lends well to the stuff that comedies are made up of. For the Marsh Onward crew, there was no shortage of material. From no hot water at the house for showers, to our golf carts not exceeding 4 miles per hour – people on bikes and foot were passing us by – our day involved cold showers and negotiating with island repair staff. Later that evening, when we attempted to venture out to the race dinner event, we realized our carts had no lights, which resulted in one of our housemates narrowly escaping a wreck with a deer that darted out in front of them, unseen.

Nine runners getting ready to go and run a race together is interesting. There’s coffee and tea being made. Lots of nervous energy, good cheer, and excitement. Then there’s the major life decisions about what to wear in the 40-something degree starting-line temperatures – long sleeves, arm sleeves, or tank tops. Somehow, we all managed to pile into the slow-going golf carts at 7 a.m. and drive to the race start, by Old Baldy Lighthouse, where we met up with roughly 160 50K and 51-miler runners. Greetings, picture taking, and lots of “good lucks” transpired before the National Anthem played and at 7:45 a.m., we were off! 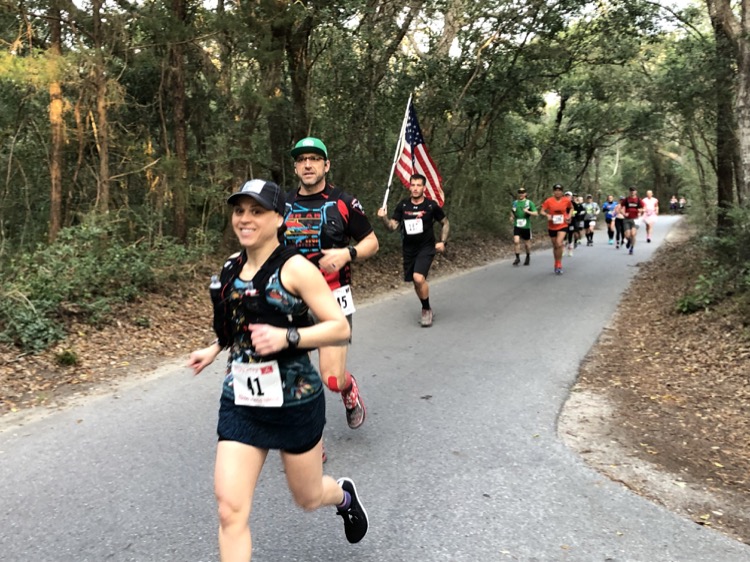 The first 10.8 miles around the island in the chilled early-morning air were invigorating. Once you cross over the creek bridge and head east across the island, the pack of runners spreads out along the car-free, one-lane-wide roads. The island running tour takes you past serene Atlantic Ocean views, and loops in and around the magnificent water-front mansions, before you move into the interior of the island and cover all of the nooks and crannies the island has to offer. There were locals sitting on their porches or in chairs on their driveways waving and cheering the runners on. There’s a quiet and soothing energy to Bald Head Island (BHI); I am always reminded of a dreamy summer getaway those first few miles and imagine how glorious it must be out on the island in the summer months. At 10.8 miles in, you come to the trail section of the race, which is RD Kostman’s way of waking you up out of your roads-are-awesome running coma and reminding you that it’s a Badwater race. Climbs, roots, rocks, obstacles, and low tree limbs abound during that 1.4-mile section; the man running behind me on the trail remarked, “this is like being on Survivor.” When you exit the trail, you are back on the road for a few moments, with a stop at Race Headquarters at the BHI Conservancy, and then it’s off to the spacious mostly secluded beach between Cape Fear and Fort Fisher, along the Atlantic Seaboard, for the remainder of the trek.

This year, the sun peaked as I entered South Beach, and for those first few feet, the clear blue skies, the cool breeze, and the calm, early-morning low tide were magical. Between the earth beneath me and that far-reaching sky, I thought to myself, there is nowhere or nothing else I rather be doing right now. Until I turned left at Cape Fear, heading onto East Beach, and the winds hit, hard and fierce. I had to keep my head down against the 25-30 mph head winds to move forward. The force was unrelenting. It took me some time to determine if I was moving faster speed walking or running, and like most of the other racers out there, I adopted a mix of both. Forward motion was the key to survival. I know not to think too far ahead in a race, but the thought of having to endure those winds for 9.5 miles heading east seemed daunting. I kept reminding myself that coming back in the opposite direction for the last nine miles I would have a gust pushing me forward. Or so I hoped.

Eventually, after what felt like hours battling the wind, but was only a little over an hour, I arrived at the mid-beach Aid Station, at mile 17.85, and entered Fort Fisher State Recreation area, where some of my favorite runners and friends were in charge, offering good cheer and food. As soon as I saw them, my spirits lifted, as 1) I remembered that every race has its hellish elements and 2) I thought of later that night, when I would be hanging out, far away from the beach and wind, and laughing. I plowed forward, and after roughly four more miles, I arrived at the turn-around Aid Station at Fort Fisher Island Ranger Headquarters, where I ran into house mates Cindi Lamb and Shannon Mick, who at 18-weeks pregnant, was looking strong.

I don’t know if I had ever been so happy and energized in a race as I was on the 9.5-mile trip back towards the finish line. Yes, the tide had begun to rise; yes, the sand was becoming more and more sugary and mush-like; yes, my feet were getting wet at points, but all I had to do was run those nine miles with the wind now at my back, and then I was done! I didn’t have to return to the beach and face the wind and sand and ocean for a second loop! I put on my headphones, which I rarely do at races based on safety and my desire to be zoned in versus out, but the setting was just too perfect: out in the ocean, there were dolphins who kept breaking the surface before they dove back in; the sky was a reflective muted blue/gray, and flocks of baby sand pipers skittled down the beach, undeterred by the wind, while the waves touched the shore and receded, gently, before they gushed back. I was immersed in the symphony of it all – the magic of running in a beautiful setting, surrounded by other runners, and I craved a soundtrack.

On my way back, a small girl wearing a running backpack was heading out to the turnaround point at Fort Fisher Aid Station, and I thought to myself, how cute! She is running back and forth on the beach like us runners. I didn’t realize that she was in the race until she passed me a few miles later, and I saw her number pinned to the side of her shorts. When I reached the mid-beach Aid Station, I learned that she was in first place, and on her final loop of the 51-miler. One of the great aspects of out and back races is that mid and back packers get to witness the first-place runners cruising by with tons of high fives and good jobs to boot. 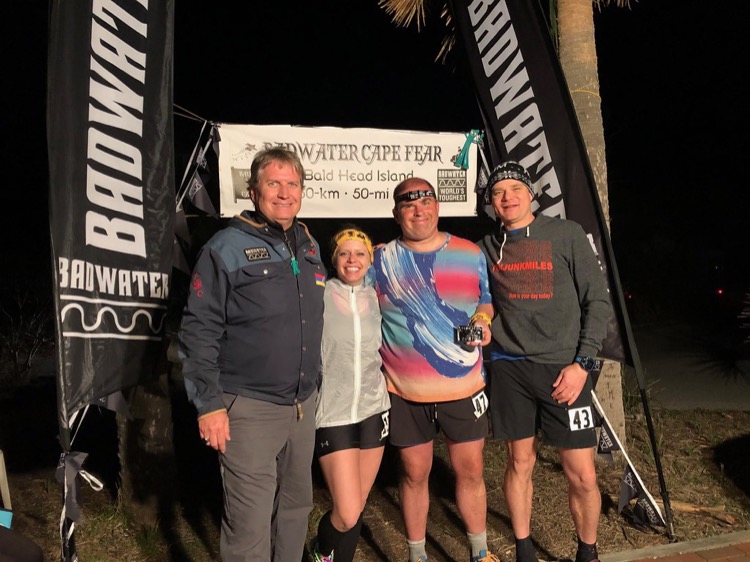 The home stretch to the finish line was filled with positive energy for me. Those last few miles, I was surrounded by house mates Bob Becker and Shannon Mick, both of whom had to still go out for their final 19 miles after they reached race headquarters. Of course, the course felt much longer heading back, but I had plenty of time to navigate. Seeing all the runners returning to the beach and starting their final loop was inspiring. They had a long way to go, but I also knew they would finish, because that is what ultrarunners do: show up, give it their all, and somehow, someway, despite it being hard, finish.

I crossed the finish line to comments such as, “you have to go back out!” “What you mean you’re done?” But I had signed up for the 50k, and I was okay with it – better than okay – I was ecstatic! I hung out, helped my already-finished-50k housemate Steve Mick to pick up the remaining golf carts from the start line, went to the house and took a freezing cold shower, and then hung out at the finish line till the last finisher came in some five hours later. I witnessed runners who had looked dead out on the beach cross the finish line with grace and gusto. There were runners who finished together and those who looked like they had survived an apocalypse. There were families cheering and there were young children who experienced their parents finish their first ultras. So much good cheer, so much love and positive energy. When I am at a race, the same sentiment always washes over me, whether I am out on the course, or volunteering: the world will wait. In a time when everything is immediate, ultra-races create a sense of floating time. All that matters is survival and making it across the finish line. Then, there’s time to sit, to take it all in, to cheer and celebrate one another. Races always remind me – and perhaps Kostman’s more than others, due to the being in the middle of nowhere aspect of them – that we are all here to honor, serve, and take care of one another. 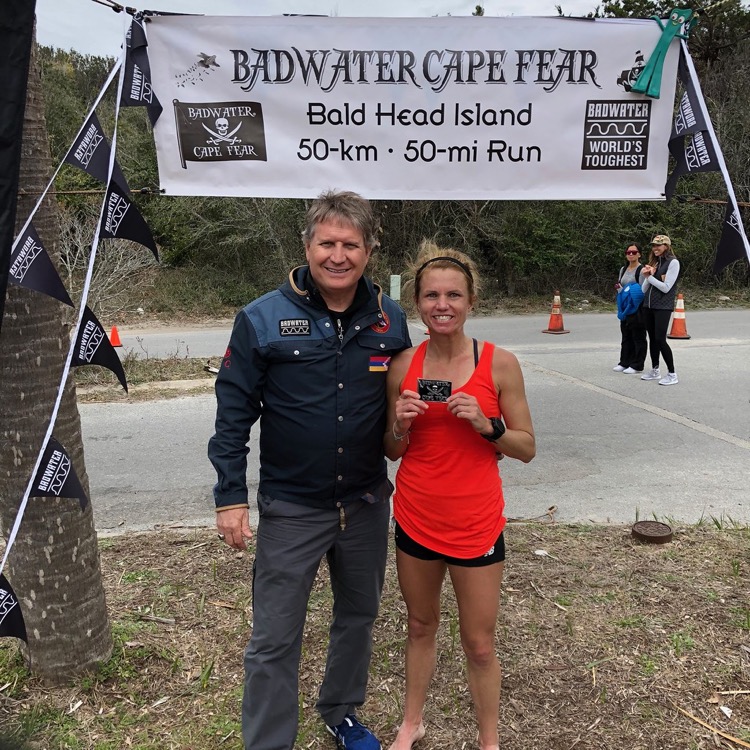 According to RD Kostman, despite the epic headwind on the first run up to Fort Fisher, several course records were broken this year:

Later that night, back at Marsh Onward, everyone in the house having finished their races, and some using a dormitory shower down the road which had hot water, we stood around in the kitchen eating and drinking and laughing about the day’s events. The next morning, we ventured to the race breakfast event, at Maritime Market, which is a big reunion of sorts, although everyone just saw one another the prior day. Being on an island with friends is unique – no one has anywhere else to go, and there’s not much to do but hang out. For most of us, I believe this is what the Badwater experience is about: being together in settings that involve intense running experiences, and then having the time and space to recover, relax, and rejoice together.