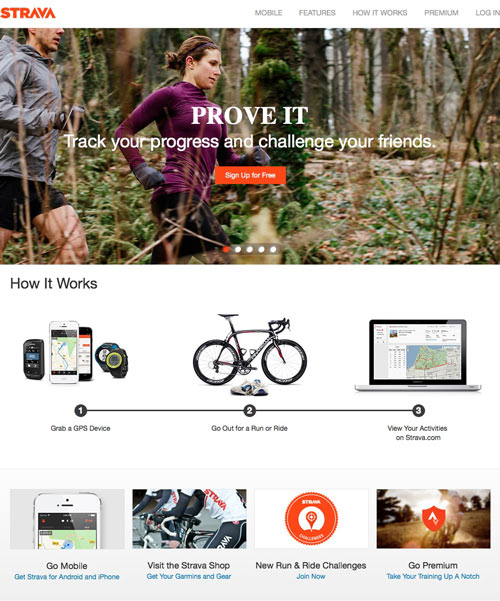 Are You On Strava?

In the ultra community, this phrase is becoming as common as “What’s your sign?” was in the 1970s.

Strava, the website and mobile app that first got its start in the cycling world, has slowly infiltrated the trail and ultra communities as runners become more comfortable merging technology with the meditative and natural delights of running.

Like many other apps available to runners, Strava uses the GPS functionality of your phone or GPS watch to plot your route, your time, your distance and the elevation gain and loss. What makes Strava unique, though, are the app’s social dynamic and — most especially — its competitive format. At its heart, Strava is one big leaderboard, making it catnip to a certain type of runner.

Dylan Bowman, a winner or top-five finisher at Leona Divide, Western States, Leadville 100 and The North Face Endurance Championship, uses it to track all of his training data. “To be honest, I was never a numbers guy or someone who tracked statistics until I got on Strava,” said Bowman, who works for the altitude training device maker Hypoxico. “What I enjoy most is the social aspect. It’s great to be able to see your friend’s and competitor’s data and give them ‘Kudos’ and encouragement. It also adds a competitive dynamic without having to be in a race, with the ability to chase fast times on certain user-created segments. It creates a lot of fun banter between the guys I train with.”

That social aspect pays off in a deeper way for Sally McRae. McRae, a member of Nike Elite Trail Team, is also a running and fitness coach who uses the app to keep tabs on her coaching clients. “I feel like I can be a better coach and athlete because of the stellar phone app,” said McRae. “I encourage all my athletes to create a Strava account, because at any time I can pull up the app and check on their workout and give immediate feedback no matter where I am or what I’m doing. I feel constantly connected to my clients in this way and I enjoy being able to send them feedback and encouragement when they’ve completed a workout. Overall, the ability to connect and be aware of what others are doing in the running community is both motivating and inspiring.”

Beyond the competitive and social angles of Strava, what’s particularly useful is the ability to use it as a travel companion. For serious runners looking to keep fit while they’re traveling, there is no longer any need to ask hotel front desk agents, or to scour travel guides or online forums for possible running routes. Strava’s Route Building function allows you to punch in any city or area in the world, and chances are that someone has logged a route. In fact, there are Strava routes in every single country in the world.

Looking for scenic routes along the Amalfi coast or in northern Wales? They’re on the site. Want to re-create your own mini-Leadville? There are nearly 100 runners who have logged times on the ascent to Hope Pass outbound, so knock yourself silly trying to match the reigning King Of The Mountain Andrew Catalano, who logged a 1:06:24 on June 29th last year – outstripping the efforts of Ian Sharman and Travis Macy, among others.

An active Strava user for the last eight months, Dominic Grossman, in an interview posted on the website of his sponsor, New Balance, said that the app helps him stay “more in tune” with his progression in training by using his data to assess his times and speed on the roads and trails he regularly runs. Comparing his times on the same routes is a litmus test of his training efficacy and fitness.

“It also lets me compete against other people — their old times, what they ran the day before or the year before — and I can see how I stack up,” said Grossman. “It helps my form and my stride because I’m constantly thinking, ‘OK, how can I wring a few more seconds or a few more minutes out of this route?’”

There are many in the ultra world who simply see no place in their life for Strava or other running apps; they may want a truly unplugged experience unencumbered by technology. Others may have no desire to broadly share their routes and times. But even for them, there could be useful technology for the trail: Road ID’s offering (available only for iPhones at the moment), which has the unique ability to share a runner’s route with family or close friends so that they can virtually “watch” their loved one’s long Saturday loop, and even be notified if the runner hasn’t moved for 10 minutes.

But for a growing number of runners, being tuned in to a global community of runners is compelling, and Strava’s expansive competitive landscape is just the ticket.

I love strava, have 40+ people just in the Team RWB Fort Hood community signed up. It’s a great way to stay social and support each other.