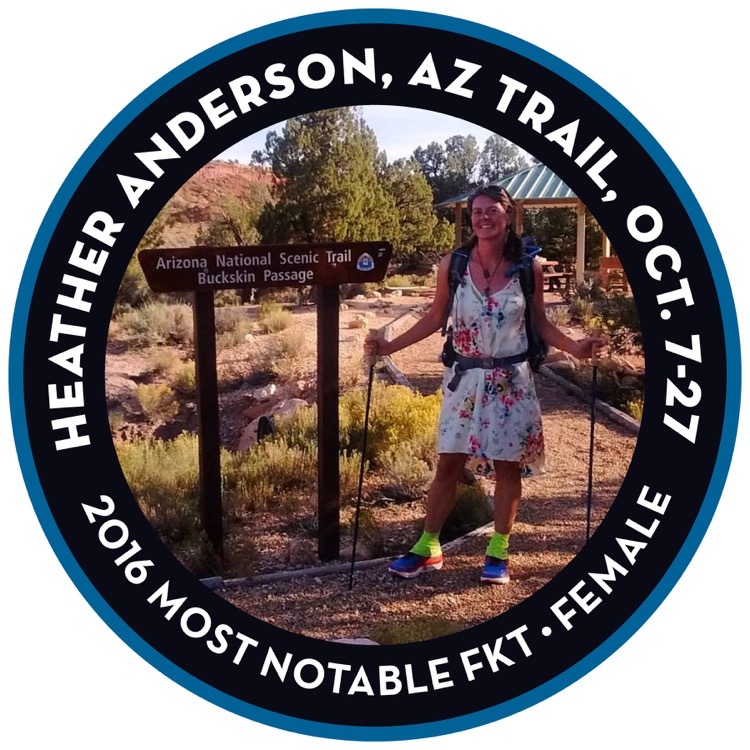 Anderson and Kostelnick named Most Notable FKT of the Year

“Anish” now holds the Overall Self-Supported (backpacker) records for the Appalachian Trail, Pacific Crest Trail, and the AZT. She stands alone (and ahead of all men too) in her specialty, with her AZT being two days faster than the Men’s Self-Supported FKT, and was on track to be the quickest AZT ever until Michael Versteeg set a quicker faster (Supported) time a few days previous. Anderson covered the 800 mile route in 19 days, 17 hours and 9 minutes.

Heather “Anish” Anderson is a 35-year old personal trainer and public speaker living in Washington State – that is, when she is not living on long trails. Anderson has completed approximately 35 traditional ultra races, including six 100-milers, but she is at her best, and is arguably the best human of all-time, at thru-hiking long trails.

Pete’s prodigious effort was the clear winner in the inaugural FKTOY voting. The Trans-Am has a longer history than many realize, going way back to the “Bunion Derby” days of the 1920’s. Pete broke a 36-year-old FKT by a whopping 4 days, including taking a ‘zero’ day, averaging over 72 miles per day for 6 weeks. Kostelnick covered the 3,067 miles in 42 days, 6 hours and 30 minutes.

Pete Kostelnick is a 29-year old financial analyst from Iowa and now lives in Hannibal, MO. Kostelnick has completed 27 ultras, including three Badwater finishes, where he has two wins and set the course record in 2016. Kostelnick also ran over 163 miles in 24 hours at Desert Solstice in 2015.