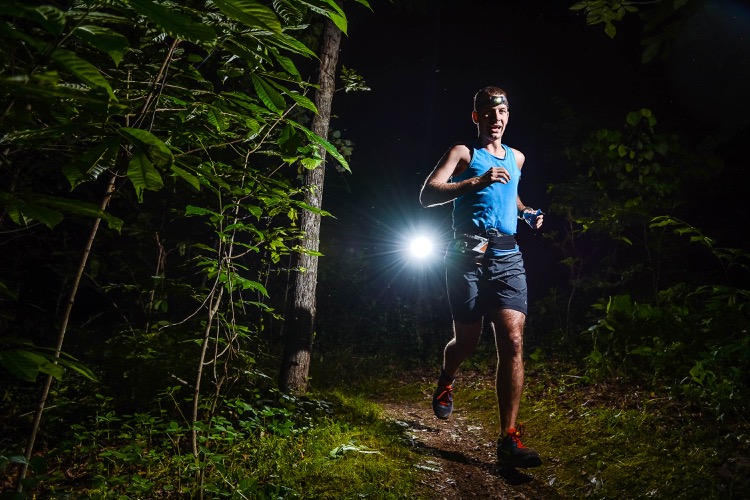 It was nearing midnight on Sunday, June 5, as 60 runners gathered at the start line in a sleepy Midwestern prairie. The beams from individual headlamps split the darkness, capturing tiny water droplets suspended in the cool summer air. People joked anxiously about getting lost in the woods, or tripping over an unseen obstacle. But the course was well marked with signs and reflective tape, and the single-track was highly runnable, with only a few rocks and roots. The real challenge participants of the inaugural Dark 2 Dawn Night Trail Race faced was the unfamiliarity, the uniqueness, of running an all-night ultra. But then that was the point.

There’s something eerily romantic about running long distances under a starlit sky. What I’ve learned from personally taking part in multiple 100-mile races is that the hours between sunset and sunrise are often the most demanding. The shift in focus, visually, and the shift in attitude, mentally and physically, can make or break your run. And that was reason enough to roll with this new concept race: to give folks who don’t necessarily do 100-mile races the opportunity to experience the distinctive ambiance of nighttime trail running and the exhilaration of watching the sun come up as they finish.

Dark 2 Dawn was held at Indian Camp Creek Park in St. Charles, Missouri, just 20 miles from downtown St. Louis. Runners traversed a scenic course loop of 6.7 miles — mostly flat single-track that runs along a wooded river bottom and then up into the rolling hills nearby. The event started at 12 a.m. and ran until 6 a.m., with distance options of 10K or six-hour timed ultra. Because it was held shortly after the conclusion of the Sunset Sizzler 15/30 Mile Mountain Bike Race, athletes had a unique chance to make their own duathlon — and many did, riding 15 miles and then running 10K.

Though Dark 2 Dawn didn’t start until midnight, mountain bikers who had finished their race and trail runners who had yet to begin theirs started congregating around 9 p.m. to listen to on-site live music and fuel up on fresh-from-the-grill barbecue chicken. Soon, the bonfire was lit and the tents were pitched (overnight camping was included in the registration).

Many family and crew members stayed up all night to cheer the runners and congratulate the finishers, sharing in their accomplishment and enjoying a crisp, clear sunrise at about 5:30 on Sunday morning. As the first-ever Dark 2 Dawn came to a close, breakfast was served and awards were handed out, and many people — runners, mountain biker converts, and friends and families — left with a new appreciation of what it takes to run the trails at night.