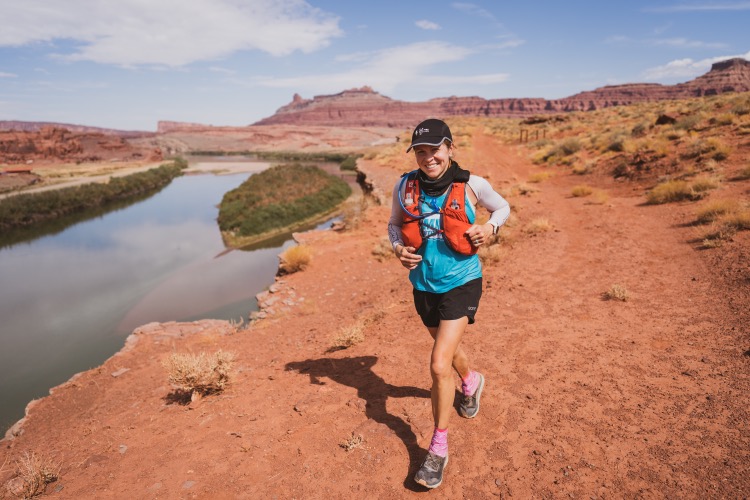 It was a calm, crisp morning at the start of the Moab 240, as the last group of runners lined up by the arch five minutes before 7 a.m. The race director laughed at how far back we all stood from the finish line, and how we were the quietest of all the starting corrals. We hollered in anticipation, as we were about to embark upon 241 miles of remote country before returning to where we started.

Excitement filled my body as I chatted with runners and passed by others. At the first aid station, everything was hands-off, and I awaited my turn. I overheard another runner saying the first 17 miles were like a half marathon and it was true—we were pushing a fast pace. I checked in at the next aid station but used my crew vehicle to replenish my calories and fluids. Unfortunately, I read the spreadsheet wrong and thought there was only five miles to the next water station when there was actually 15. At one point, the flagging became very sparse and I only saw two flags in two miles. It was during this time that I realized my colossal mistake of not filling up my bladder. The sun beat down, and there was little wind and no shade. Once off of the slick rock, the course ran along sandy ATV roads with large towering red rocks. “It was like running in an oven with red rocks on your left and right, and red sand under your feet,” said race director Candice Burt. Luckily, I made it to base camp and guzzled lemonade mixed with salt, and filled up my bottles and bladder. I was not about to make another hydration mistake. The next water station was five miles out.

I topped off and was making good time, but about 45 miles in, my stomach turned. I was trying to make up from the dehydration during the early miles, and I was sick. I let my pack go and slowed my pace to a walk. I knew getting sick this early in the race could mean game over, and then I ran out of water again about three miles from the next aid station. Most runners did. It was too hot of a day and too long of a stretch when running through an oven. 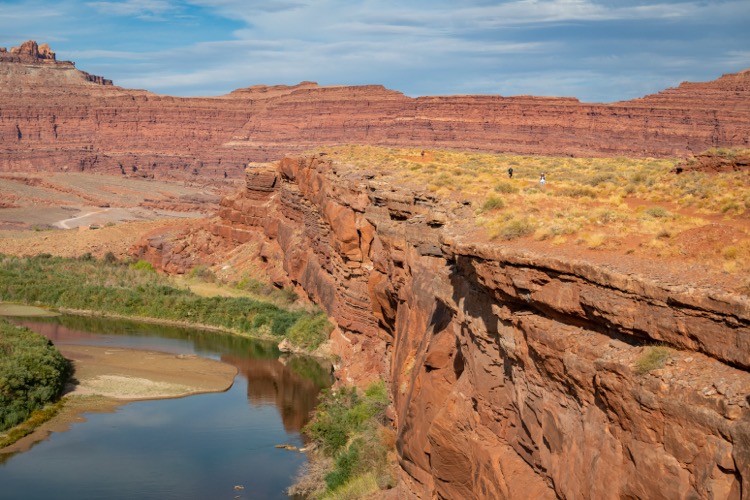 I finally made it to Indian Creek (mile 72) about three hours behind schedule. I almost stepped on a large black scorpion who must have been just as afraid of me as I was of him, because he was ready to strike. I decided then that I wouldn’t be taking any naps on the trail and I slept in my crew vehicle for half an hour, then proceeded to throw up everything from the day and instantly felt better.

The next aid station, mile 87, was awesome. The volunteers made me eggs on request and got me whatever I needed. I also appreciated that no one touched my bottles and that they wouldn’t let me touch the refill spouts.  Their attitudes were infectious, and I left feeling stoked to be out in the middle of the desert.

The following night was spent running dirt roads. This section was flat and took a lot of mental games to get through. This was also the first time I got really lost. I was very grateful the volunteers at the pre-race expo made sure we all had a GPX file downloaded to our devices.

As a storm rolled in around mile 173, climbing up the rocky ascent became extra challenging as I battled strong headwinds. By the time I arrived at Pole Canyon (mile 185), it was a sight for sore eyes. Leaving this aid station, I was surrounded by trees and beautiful single track, and it ended up being my favorite part of the whole run. 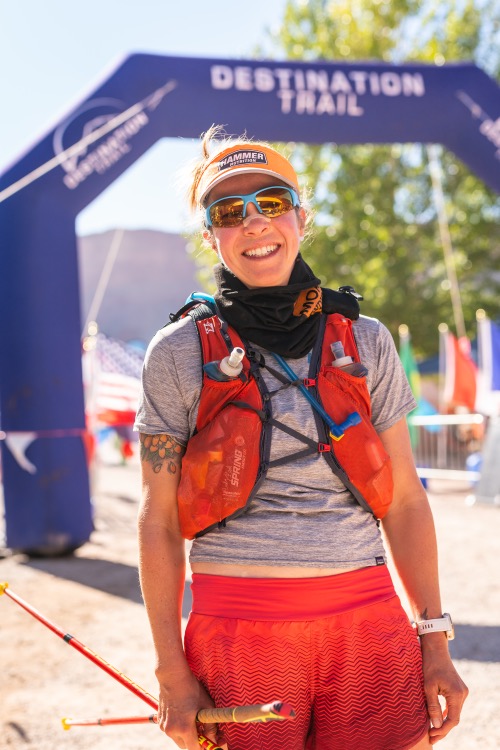 Jessi crosses the line as the women’s champion with a time of 80:09:42. Photo: Howie Stern

After Geyser Pass, the trail continued to climb and the temperatures continued to drop, but beautiful single track and trees once again surrounded me until it eventually ended on a gravel road. You could see the lights of Moab in the distance, and the final push came at Porcupine Rim where I felt like I was being asked to climb on the Stairmaster after 225 miles. The last 10 miles took everything I had—it felt like the hottest day yet, and the trail was a harsh mixture of sand, slick rock and steps. What made it worse were the herds of mountain bikers that were sharing the trail—it was all I could do to put one foot in front of the other, and yet I kept having to stop to allow bikers to pass.

I knew I was close when I reached the highway, but I still had around three miles to push. Finally, I saw the junction from where we started just a few days prior, and I ran under the underpass, turned left up the hill, straight along the highway and saw the sign, “Welcome Moab 240 Runners.” I turned right into the RV Park, down the paved road, and ran beneath the arch. I had safely returned after 3 days and 8 hours, having completed the most challenging test of physical and mental toughness, and it felt amazing.

Wow, truly an amazing adventure of determination and grit to get it done.
CONGRATS!!!

Great story! It is easy to just consider the result rather than the ups and downs of the process! I am running the BF 200 this year, and will remember to push through these downs. Thank you! And great job!