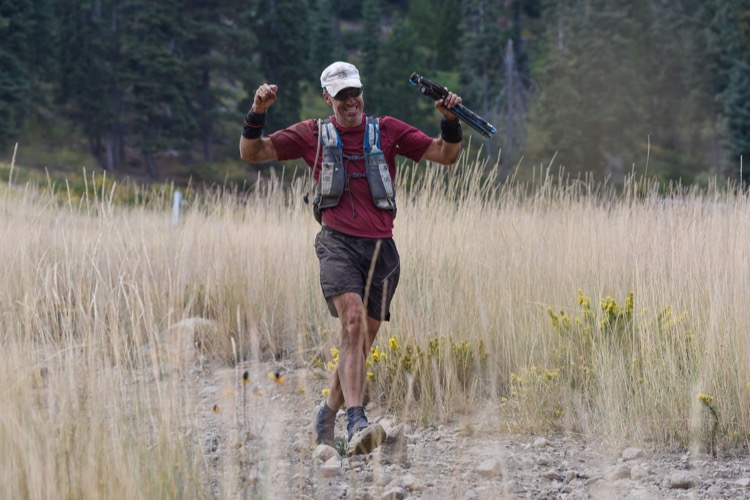 We were 170 miles into the race and had just made the decision to try for a Top 10 position, something I hadn’t even considered until a friend suggested it one month earlier. She and her husband, who successfully completed this run last year, had taken me on training runs in Tahoe and had a good sense of my capabilities. However, during our pre-race meetings, I told my crew that I wouldn’t entertain a Top 10 until 150 miles into the race. The main goal was to finish within the 100-hour time limit and I didn’t want to go out too fast and run out of gas before the finish line. At mile 150, I was in 15th place so it didn’t seem to be a realistic goal. But at mile 170 I was in 11th place and had just slept 90 minutes – my only sleep of the race but enough to get me to the finish line.

67 hours earlier, I had started the most challenging endurance event of my life. The course traverses 205.5 miles counter-clockwise around Lake Tahoe over 40,000 feet of elevation gain on rugged backpacking trails – primarily the Tahoe Rim Trail. If you drive around the Lake, it is 72 miles but this course goes well into the wilderness and you don’t even see the lake until 90 miles after the start. And even then you are a long way from the water.

The first 62 miles is the hardest section with much of the running on the very rocky and dusty Rubicon Jeep Trail. After years of 4×4 traffic, the dust is as fine as flour, which wreaks havoc on the lungs. When I first saw my wife and crew (mile 62 and 18 hours in), my throat was raw and swollen. I could hardly talk. I had also kicked a rock earlier in the day breaking my big toenail and in need of the foot doctor. But, I felt relatively good and was happy to see Audrey, my wife, and my first pacer, Steve Sherman. However, after sitting down for a few minutes, the “shutters closed” as Audrey says. I turned white and checked out for a few minutes. While I didn’t pass out, I clearly was not part of the conversation. She walked me to a comfortable place where I could lie down, get off my feet and relax for 30 minutes.

After that much needed break, Steve and I left that aid station rejuvenated with our headlamps shining and ran for a few hours. Upon cresting Echo Summit on Highway 50, the sun started to rise. A few miles downhill to an aid station then a 20-mile climb to the base of Freel Peak was how I spent much of the day. As Steve and I started to climb, I was feeling the effects of 70 miles of running and 24 hours with no sleep. I pulled out my iPod and a caffeine pill for a much-needed boost up the hill. Part way through the climb, I picked up my second pacer, Jeff Durban, who took me to our highest point, 9,700 feet above sea level.

Race rules say that you can see your crew or pick up a pacer after 62 miles and then have a pacer to the end. “Pacer” is a bit of a misnomer as I am generally setting the pace, albeit slow, but they are there for my safety, to remind me to eat or drink, talk to me, check my sanity, and all the little things needed to keep a runner moving. I was fortunate to have 5 pacers with each one running between 20 – 35 miles. Each of these guys is an accomplished athlete with many 100 mile runs, Ironman’s, or Boston Qualifying Marathons to their names. They were out there because they see the beauty in helping someone accomplish such a goal. It’s purely selfless what they do and I am forever grateful and was honored to have them by my side.

The crew and pacers experience their own exhaustion. I have come to realize that when the body is deprived of sleep, the mind slows down significantly. The legs keep moving but the processing power of the brain is impaired. Fortunately, I only needed to focus on two things: 1) Eat/Drink and 2) Move Forward. And since my watch beeps when it is time to eat, there was not a lot of brain power needed on my part. My crew, on the other hand, had a lot more to think about such as making sure they arrived at the next Aid Station before me, not getting lost while en route, bringing the right food, clothes and gear, going to the store to pick up throat lozenges which I had requested, and a myriad of other things necessary to keep a tired runner moving.

Jeff Durban, after running through the night, left me in good hands with Andy Frey at Spooner Summit. I had been looking forward to this section as it promised to be some of the most beautiful scenery. We were to have majestic views of the Lake Tahoe and surrounding high-Sierra lakes. Unfortunately those majestic views were faded by the smoke that had blown in from all the fires in California. While disappointing to not experience the magnificent vistas this lake offers, I was enjoying the beautiful running trails. I was also pleased to have finished 5 marathons and have less than three marathons remaining. Shortly after leaving Incline Village and running past many multi-million dollar mansions, we went up the wall. Within 2 miles, we climbed 1,600 feet with most of that elevation gain covered in 1 mile. It is the ultimate Stairmaster routine at mile 145. And, it happened to be at the hottest part of the race. Fortunately I had trained on that section so knew what to expect where as the women we met at the top said, “If I’d known about that section, I’d never have signed up for this race.” Cresting the top, it was mostly downhill to Brockway Aid Station.

Bruce Sinclair would take me from Brockway Summit to Tahoe City which was expected to be a relatively easy 20-mile section with a net downhill. But, it turned out to be more challenging than when I ran it several months earlier on a training run. Now it was night and some vandals had removed quite a few of the trail markers causing us to question our location several times. And then it started to rain. At least the rain kept the dust down.

Normally I like to run in front but my headlamp was a bit dim so I wanted to save my extra battery for the steep descent into Tahoe City. I got behind Bruce and stared at his feet in a trance-like state for 10 miles. We had picked up another runner at this point who was following close behind me. All of a sudden he says, in a commanding voice, “STOP!” Our heart rate increased after I heard him quietly say, “Back up very slowly, there is a cat out there.” I instantly knew he wasn’t talking about the domesticated kitty cat so my mind started to race. Lion, Tiger, Cougar, Cheetah? Bruce moved closer and placed his hand on my shoulder and together we slowly moved up trail until we saw two eyeballs staring back at us. After what appeared to be an hour-long standoff – realistically it was probably 30 seconds – we concluded it was a Deer caught in our ‘headlights’ and we weren’t in danger. A well-rested coherent runner would have quickly realized Cheetahs aren’t native to these parts. I was neither well-rested nor coherent. Heart rates dropped to 100 and off we went down the trail to Tahoe City.

We arrived in Tahoe City (mile 170) at 2:25am on Monday and I was exhausted. Sixty-five and half hours and no sleep was finally taking its toll and I couldn’t get into the van fast enough to take a nap. In fact, I woke my wife up and kicked her out of our makeshift bed – a decision I may regret later in my marriage. Before falling asleep, I asked to be woken up in 1 hour. I was asleep immediately. After one hour, Audrey woke me up and seeing that I’d been sound asleep, asked if I wanted another 30 minutes. There was nothing I wanted more.

Ninety minutes of sleep made a world of difference. I could now smell the finish line as we were 30 miles away and in 11th place. We were going to go for a Top 10 which required scarfing down some bacon and eggs and more bacon and then an energy bar and another piece of bacon. Ron Rel, my final pacer, and I headed out of Tahoe City with a game plan to be in the Top 10. As we climbed the first of two steep mountains to the finish line, we passed one person – We were now in 10th position as we descended into the final aid station with only 15 miles to go.

Another long climb from 6,200 feet to 8,500 feet took what little energy was left in my legs. As I summited that peak and hit mile 200, I was feeling my legs get heavier. My pacer was hanging back ¼ mile to gather some information about where other runners were when I heard him sprinting to me and yelling, “TOP 10 IS IN JEOPARDY…TOP 10 IS IN JEOPARDY. RUN! RUN! RUN!”

“Shit!” was what I uttered and then gave it everything I had. I needed to be Superman and fly down the hill to maintain my top 10 position. The big difference is that Superman, when flying, can stay in the air. I, on the other hand, in an attempt to fly did not stay aloft and went down with a thud on the dusty, rocky trail. At some point during this run I had expected to fall and thought I had evaded such disaster now that I was only 5.5 miles from finishing. Fortunately I didn’t hurt myself too badly. A little blood, a few scratches, and covered in dirt. As my wife later said, “You looked like Pig Pen.” The 11th place runner passed me with ease and my 20-year-older body was not going to match his on the remaining 5.5 miles of downhill. Top 10 was gone.

While disappointed for about 3 seconds, I was proud of my accomplishment. I had run 205.5 miles in 76.5 hours. I had climbed 40,000 feet of elevation gain (Everest is 29,029 feet above sea level). I had slept 1.5 hours for the entire event. Most people take three weeks to travel this distance. I did it in three days. As I descended to the bottom of Homewood Ski Resort with the finish line in site, I started to see the familiar faces of my crew and my wife standing in the middle of the trail waiting for a hug. Despite 76 hours of sweat and smell and being covered in dirt, my wife gave me the warmest hug a guy could ask for. That is love. For the past 50 miles I had been dreaming about three things: 1) A hug from Audrey; 2) A much needed shower; and, 3) A bowl of ice cream. Within one hour of completing this epic adventure, all three dreams were realized.

Life is about pushing your mind and body to new limits. And as you reach those limits and go beyond, you realize how so much of those limits are fabricated in our head. We can accomplish far more than we think we can. As my good friend and final pacer, Ron Rel, said to me before we started, “I love craziness. This is PURE craziness!” How right he was. If you ever get the opportunity to do something crazy, do it. There is nothing more rewarding than accomplishing something you were too crazy to sign up for in the first place.