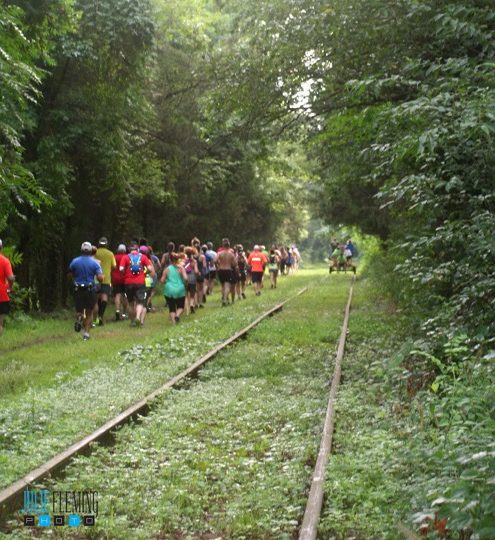 We knew it had to happen. After seven years of moderate temperatures for this early August 50km, temperatures and dew points in the mid 70s slowed runners in the eighth Dahlgren Heritage Rail Trail 50km.

The 6:30 a.m. race start saw clear skies, 74 degrees and a 73 degree dew point. Even with the full canopy, the bright sun quickly rose temps into the 80s slowing even the best runners, and the midpackers baked in the 90s.

Michael Wardian of Arlington, Virginia attempted to break his own course record he set in 2014. In that year, his run of 3:10:26 was the fastest 50km in the United States on an entirely dirt course. He took it out solo at a 6:18 pace and was within a minute of course record pace at mile 23. At last the day took its toll, as he finished first in 3:17:43.

Michael Runyon of Annandale, Virginia negative split the race and finished second in 3:44:54, improving on his third place finish time from 2015 by almost 30 minutes. At 20 years old, he may be somebody to watch in upcoming years.

Catherine Sykes of Midlothian, Virginia ran with the top four men for most of the day and finished as the first female with the second fastest female event time of 4:00:45.

The Dahlgren Railroad was built in 1942 between the main east coast north-south rail corridor and the Dahlgren Naval Base. The rail bed followed the Northern Neck ridge between the Potomac and Rappahannock Rivers, crossing swamps and through old growth forest. The line was used to replenish supplies for the base. Eventually, the rail line was terminated at the Birchwood Power Plant and the remaining 15.75 miles was purchased by the Dahlgren Railroad Heritage Trail Association.

Alex Long of Port Royal, Virginia received the caboose award as the last finisher in 7:52:24. By the time of his finish, the temperature had risen to 95 degrees.

Steve DeSantis of Alexandria, Virginia finished in 5:14:30 after recovering from the previous year’s injuries, and is the only person to complete all eight editions.

Thanks to the Dahlgren Railroad Heritage Trail Association who staffed all of the aid stations, and the King George Sheriff, King George Fire and Rescue and the Rappahannock Valley Amateur Radio Club for their support.

Of the 67 starters, only 63 finished. Even with the southern summer conditions, historically this race has had a 97.75% finish rate; now the finish rate has dropped a little. The race date for 2017 is scheduled for August 5. With both the men’s and women’s first place times in 2014 being the fastest in the United States for a 50km on an entirely dirt course, this race is fast and makes for an excellent first time ultra.

Great article. A small addendum: sailors from the Aegis Training and Readiness Center (ATRC) at the navy base at Dahlgren, Virginia, staffed the aid station at the turn-around point as well as one of the road crossings. Their support was much appreciated.