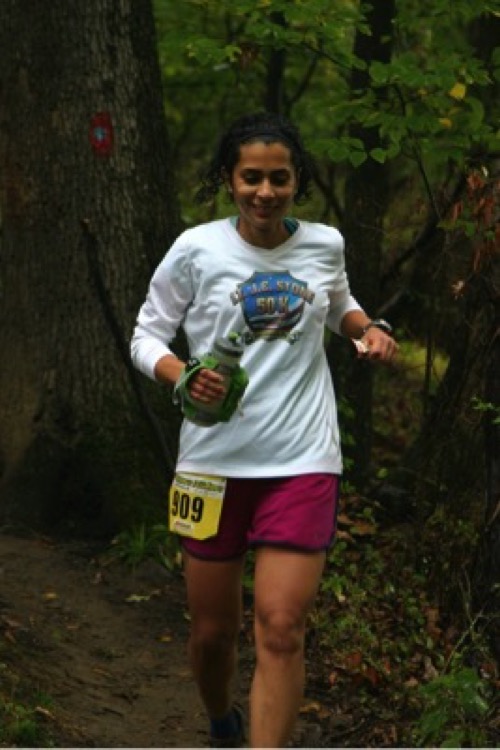 It seemed like the perfect plan. After 10 very successful years of running the JC
Stone 50K Spring road race, why not take advantage of the runner friendly Western Pennsylvania fall weather and the beautiful running trails around North Park to create the second in the series of JC Stone 50K Races. What a plan. The course was mapped out: A challenging but runnable 50K course on 100% single tract trails through North Park. The date was selected: early October, generally known for clear skies and mild temperatures. And there it was, the inaugural JC Stone 50K Trail Race. Perfect. What could go wrong with that plan?

Unfortunately, Mother Nature was not made aware of the perfect plan and the usual clear fall weather was replaced with 12 hours of heavy, steady rain. The 20 registered runners and dozens of volunteers went to bed Friday night listening to the pounding rain and woke up Saturday morning to the same agonizing sound. Although the conditions were less than ideal, the field of 8 woman and 12 men were not discouraged. At first light, the runners set out on the course which consisted of one 5 mile loop, followed by three nine mile loops. Fully stocked aide stations were located about every 3 miles along the course so that runners had access to all the traditional liquids and nutritional supplies.

Even with the steady rain that lasted about 3 hours into the event, the trails held up well enough to allow for a very competitive race. In the men’s category, Aaron Horrell and Thomas Castillo opened up a pretty substantial lead and hung close together until the final 9 mile loop. On the final lap, Aaron outpaced Thomas and posted a winning time of 5:12:11 (course record). In the woman’s division Inna Borisov was in a solid second place position when the first place female dropped to due injury. Inna pushed the rest of the race to record an impressive 6:25:09 first place finish (also a course record).

Eighteen of the 20 starters completed the course; a very impressive finishing percentage considering the wet conditions early in the race and the fact that almost half of the starters were making their first attempt at the 50K distance. Congratulations to all the finishers, we hope you enjoy the unique and large finishers awards.