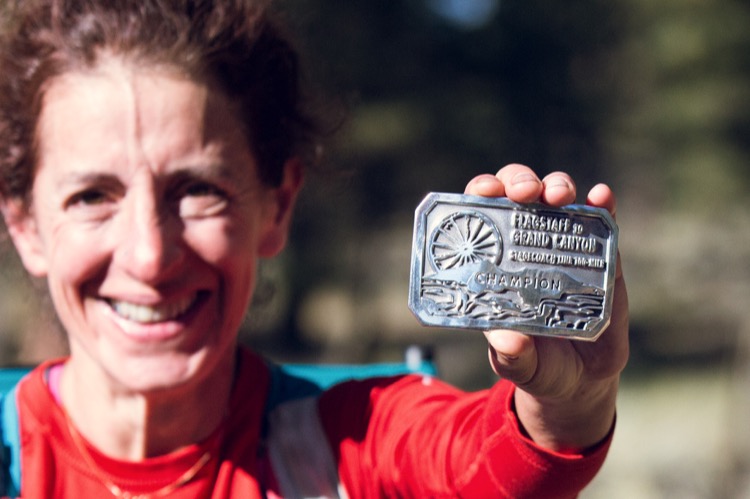 The Flagstaff to Grand Canyon Stagecoach Line unfolds like a good story. Like any addictive page-turner, the event establishes its characters, puts them through hell but ultimately leaves each participant with a newfound sense of introspection and grasp on what they can truly accomplish.

Stagecoach’s 100-mile, 55k and relay races begin in a wide meadow at the base of the San Francisco Peaks, Arizona’s highest mountains, near the Flagstaff Hotshots facility. In this year’s 55k event, Flagstaff’s Jim Walmsley, two-time winner of the JFK 50 Mile, took a commanding lead on the initial 5-mile climb to 9,000 feet on the Arizona Trail. Tucson’s Sion Lupowitz, second at last year’s Mogollon Monster 100 Mile, did the same in the 100-mile distance. Katie McGee, a 2005 USATF World Cup 100K team member, copied form in the 55k event by cruising through the high altitude aspens well ahead of all but Walmsley and southern Arizona speedster Catlow Shipek, last year’s Old Pueblo 50 Mile winner.

Jim Walmsley speeds down the trail toward a new course record in the 55k. He smashed his own course record from last year by 34 minutes. Photo: Kristin Wilson

As the runners passed through the race’s first aid station at The Nature Conservancy’s Hart Prairie Preserve, it was clear that the women’s 100-mile race would be a battle between Kelly Nicholas and Holly Hovious, both newbies at the 100-mile distance.

After passing by idyllic Bismarck Lake at mile 13, runners descend 2,700 feet in 20 miles on single-track and
double-track trails through aspen, spruce, fir, ponderosa and finally into pinion-juniper rangeland. At Cedar Ranch, mile 33, the 55k race ends. Walmsley set a new course record in 3:30:44, averaging a blistering 6:15-minute mile pace. Shipek finished second in 4:19:10, and John Mollenhour finished third and won the master’s division in 5:17:06. On the women’s side, McGee captured the win and set a new course record in 4:37:00. Alyson Jay collected second overall in 5:45:02 and Margaret Montfort, like Mollenhouer, finished third and
took home the women’s masters title in 6:07:31.

The 100-mile runners and relays still had many miles to travel and continued north towards the Grand Canyon.

100-mile veteran Dan Brenden running through the aspens near mile 16 on the slopes of the San Francisco Peaks. Photo: Kristin Wilson

Babbitt Ranches, the title sponsor of the Stagecoach races, prides itself on three cornerstone fundamentals: character, nature and community. One can see why the fit between ranch and race is both seamless and logical. Participants traverse Babbitt’s for 20 miles. Locations like Cedar Ranch, Tub Ranch and Oil Line serve as aid station oases for runners as they cross one of the largest ranches in the United States.

This expanse is, perhaps, the toughest portion of the course as night falls and temperatures begin to drop. Lupowitz, unfazed by the setting sun, built on his lead in the 100-mile race. Nicholas and Hovious continued to duke it out as they sidestepped cattle, horses and antelope under clear star-riddled skies en route to race distances they’d never covered before. This year, forty-one 100-mile starters and eight relay teams would press forward, through Babbitt Ranches, towards the finish.

Near mile 55, runners enter the Kaibab National Forest and leave the dirt roads of Babbitt Ranches for the lesser traveled single-track of the Arizona Trail. Here, at Boundary Aid Station, bugling elk and coyote howls aren’t uncommon. At Moqui Aid Station, near mile 60, runners rest at the same location where 1890s stagecoach trips bound for the Grand Canyon would stop to water their horses. After passing under the old-growth ponderosa stands near Russell Tank, mile 68, participants traverse the Coconino Rim, a long 12-mile limestone cliff rich with archaeological history. During the 500-foot descent to historic Hull Cabin, which also serves as the 80-mile aid station, runners can catch a glimpse of the Grand Canyon.

Stagecoach ends in the small Grand Canyon National Park gateway town of Tusayan, just north of the Grand Canyon Visitor Center and IMAX Theater. Lupowitz would hold onto his lead and win in 17:42:17, the third fastest time in Stagecoach’s four-year history. Flagstaff’s Buck Blankenship avenged last year’s DNF by finishing second in 20:49:18 and Wayne Williams, in his first 100-mile attempt, finished third in 21:45:30.

Kelly Nicholas pulled ahead of Holly Hovious during the tough night hours for the win in 24:36:59 to Hovious’s
25:12:10. California’s Kara Teklinski methodically moved through the pack to finish third woman and take the masters title in 26:54:50. Twenty-nine 100-mile runners completed this year’s event. The two-person relay team, Mad Bruins, won their relay category in 17:12:49.

Next year’s race will be held on September 23-24, 2017. We’re already looking forward to putting together another storybook masterpiece.