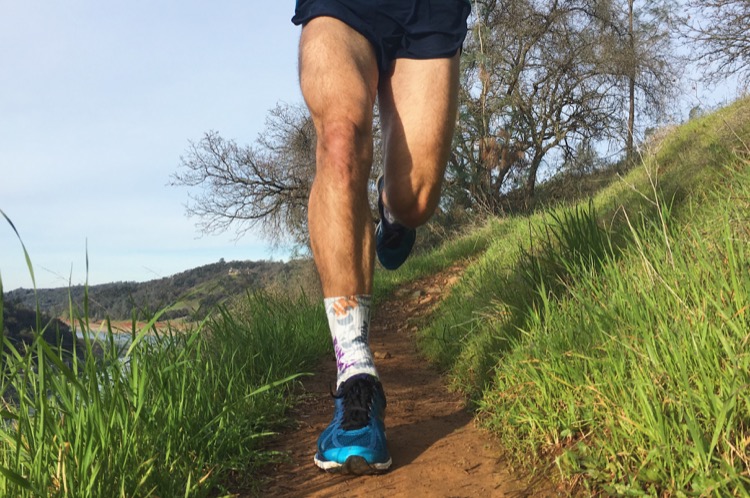 10 Easy Steps for Making an Ultra-Fool of Yourself

These are, actually, the very same pair of road shoes you were wearing last year at this time, when you graduated college and called it quits on running. Though you haven’t worn them in a year, the tread is nearly non-existent.

Yes, they have seen too many miles, but no, you cannot justify buying new ones—not yet. You are broke as you’ve ever been, broke as a joke, broke as a grad student living off of a threadbare monthly stipend. Put them on anyway. You are nothing if not loyal.

2. Get out on the trails. It would be a shame not to. You’ve recently moved out to California, after all—the mythic land of the near-endless single-track, with coastlines and deserts and mountains and everything in between—and it’s all much better than anything you’d find back in the Indiana countryside where you grew up and learned to run.

Begin each run by reminding yourself that, while you will surely struggle, while you will surely huff and puff and sweat and generally make the high-pitched desperate pleading sounds of a dying or tortured mammal much smaller than you—while all of that is true, remember: to struggle at all is a kind of beauty. When presented with photographic evidence to the contrary, shrug it off. Ain’t nobody gonna dull your shine.

Sometime during the winter—a word, it turns out, that means something entirely different in California—as the mist is rolling in over a ridgeline that you’re just about to crest, and your arms finally start to get that sweet-as-honey swing back to them, and then you get passed by a mud-flinging woman wearing what look like all-terrain tires—except on her shoes—and a water-logged vest that’s must weigh at least forty pounds—and the woman lets out what can only be described as a hell-raising yell—sometime during all of this, decide that you want to run an ultramarathon.

3. Discover UltraSignup. Giggle at all of the different ways that runners find to put the word “ultra” in front of anything. Click through the photographs underneath race listings. An ex-girlfriend once told you that long-distance runners always look like they’re constipated in pictures, and now that you’ve thought it you can’t unthink it. Scroll for hours, hunting for the perfect combination of furrowed brow and surprise, laughing all the while. Ignore the jealousy you can feel churning in your stomach. Just for kicks, use the search function to see if there are any races near you.

In the cool blue light of your computer-lit room, as your laptop hums softly in your lap and you bury your arm up to your elbow in an endless bag of tortilla chips, and you click through endless photos of other humans having more fun than you, experience your first real come-to-Jesus moment. Look around your room. Breathe. Realize that, if your life has been anything up to this point, it has been this moment, this mildly distressing moment, extended out over a blurred period of days and nights and months and years.

4. Commit. Choose a race. For the same reason you drink “nitro” coffee and all your basketball shoes in high school started with the word “hyper,” look for a race where the word “ultra” appears in the name somewhere. Bonus points if it appears twice. Other than that, decide that you don’t care which race you choose. Just pick one. As long as it’s only 50 km—you aren’t crazy. Not yet.

Call home. Tell your mother the news. Take pleasure in the way she repeats your words back to you, making your life sound far more interesting than it actually objectively is, making you sound super-human: “An ultra-marathon?”

5. Read everything you can about ultrarunning. Listen to podcast interviews. Watch YouTube videos. Subscribe to blogs. Follow all of the relevant runners on Facebook, Twitter, Instagram, and especially Strava. Notice how many times these people say the word “Auburn.” Make a mental note that they use it to refer to a physical place, instead of a University somewhere in the South or a particular shade of red. Auburn. Auburn. Auburn. You like the sound of that. Open Google Maps, use the search function, and, when the red pin pops up on the screen, click “Get Directions.”

6. Dream the thousand dreams. Drive to Auburn. Get lost in a town that is smaller than the campus of the university where you are going to graduate school but larger than your hometown in Indiana. Eventually park your truck at what you think is the right place—probably.

Proceed to have your ass handed to you by what the woman at the running store called “candy-ass” trails. Trip regularly. Submerge both feet at water crossings. When facing a fork in the trail, choose the downhill route every time. Eventually, with no further way down, turn around and face the consequences of your actions. With the sun sinking faster than you had imagined it would—stupid Indiana boy, not used to obstacles on the horizon—chase the day’s dying light out of the canyons. When you get home, write “four miles” in your log. Scratch that out. Write “four miles – I have never known trail running before today.” A week later, after running in the Marin Headlands, scratch that out too. Walk funny for a few days.

In the wistful middle miles of a 20-miler some months later, when you’ve got your legs back under you and it has once again begun to feel so good to hurt so bad, start dreaming the thousand dreams. Dream of Moab, of running through the bottom of canyons pinpricked with cacti and stunning rock formations, with red canyon walls cutting into the sky on either side like bodyguards. Dream of Mt. Rainier, of running around a mountain’s coniferous base so thoroughly green it could only grow in soil fed by a year’s worth of rain and runoff. Dream of Appalachia, of climbing out of a muggy holler in Eastern Tennessee with the early morning humidity clinging to your waist like a ghoul’s hands and the promise of a full day’s work ahead of you. Dream of…

7. Buy the shoes you don’t think you can afford. Immediately regret spending the money. Go to the grocery store where you can buy cans of soup for 49 cents. Wear your new shoes in order to break them in. Wiggle your toes in the cereal aisle. Next to the deli counter, rock side to side to test out the toe box. Try not to think, constantly and without end, about how foolish you might look to the average shopper.

When the elderly woman bagging your groceries looks at your feet and asks if you’re, like, a proper runner? Resist the urge to kiss her on the mouth. Skip through the parking lot. Keep the shoes. Canned soup isn’t so bad. Besides, the toe box is a good fit.

8. Run the race. Blow Up. Bonk. Chafe everywhere. Experience gastric distress to a degree you never thought possible. Walk more than you expected to. Develop blisters from the new shoes. Watch your “A goal” disappear from the realm of possibility. Soldier on anyway.

At the finish, as the prayed-for chute finally looms, and the moment that you always pictured would last for centuries turns out to last approximately no time at all, try—try your hardest, and then fail—to stop yourself from smiling a smile so large that it hurts your entire face.

9. Get lost. Anywhere. Everywhere. Try out new trails not because you’re bored with the old ones but because you’re scared you won’t get a chance to see everything you’d like to see before your time on this earth as a relatively mobile biped comes to an end.

Go running alone through the spring rain on a trail somewhere east of Auburn. As you round each new bend and the trail greets you with yet another soul-crippling view, let the pure ringing joy of it all bring you to your knees.

Allow yourself to cry. After all, you’re already wet. When a hiker approaches, pretend to tie your shoe. When they ask if you’re okay, just say yes—it would be too difficult to explain why you are so much more than okay, and yet still crying.

Try to stop your watch, if you can remember.

10. Write about your experience. Try your hardest to sound like you know what you’re talking about.

Try your hardest to sound confident, to run taller than you actually are, to soak up everything you can, to give your body the benefit of the doubt. To learn and grow and become more than you ever were before you found the trails.

Try your hardest to sound, above all else, the opposite of how you actually feel: like you are making up every single beautiful inch of your time in this sport as you go along. Then get out the door and smile at the thought of the foolish mistakes that are waiting for you.

Very inspirational. Even for someone that has been running ultras for a few years, reminded me of the simplicity of it and that “everything is new” feeling.

There is so much about this sport that simply cannot be put into words. But you have probably done the best that we mortals could possibly hope. Bravo, kindred spirit. Bravo.