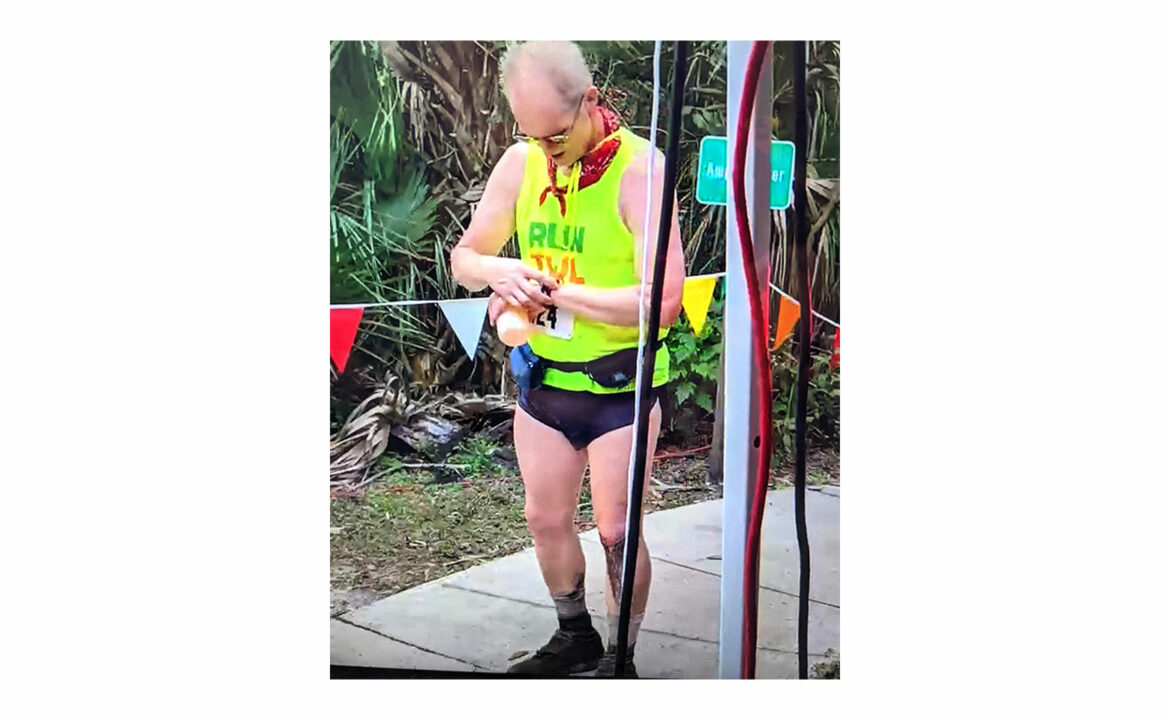 UPDATE:  Blewett was found Monday just after 8 a.m. EST not far from the race course behind a local business. Police say he was disoriented and has been transported to a local hospital with non-life-threatening injuries. He had been missing for 36 hours.

In the early morning hours on Sunday, police arrived in force at the Enchanted Forest Sanctuary in Titusville, Florida, some 42 miles east of Orlando. Helicopters, ATVs, multiple vehicles and a group of police and volunteers were soon searching for a missing runner. Other runners had been scouring the woods on their own since 11 p.m. at the Ancient Oaks 100-Mile Endurance Run, looking for 57-year-old Earl Blewett of Tulsa, Oklahoma. “Every hour, we sent volunteer runners out on the course both frontwards and backwards looking for him,” says race director Mike Melton. Then, he sent runners into the side trails not used in the race and along the highway just outside the park. Still nothing. “When it got light this morning, we sent more volunteers out to cover the course.” Blewett has yet to be found.

“Usually this happens when a runner quits and doesn’t tell the race director,” says ultrarunner Matt Mahoney who showed up in the afternoon on Sunday to run a few laps with friends. But Blewett’s case seems different. He had checked out of the Best Western early Saturday morning and his rental car, a white Chevrolet Malibu, was still there with his cell phone and I.D. inside. “When I left at 1:30 in the afternoon on Sunday, there were 15 police and emergency vehicles, two ATVs and a helicopter.” Also involved with the search were five mounted policemen and a pack of bloodhounds. 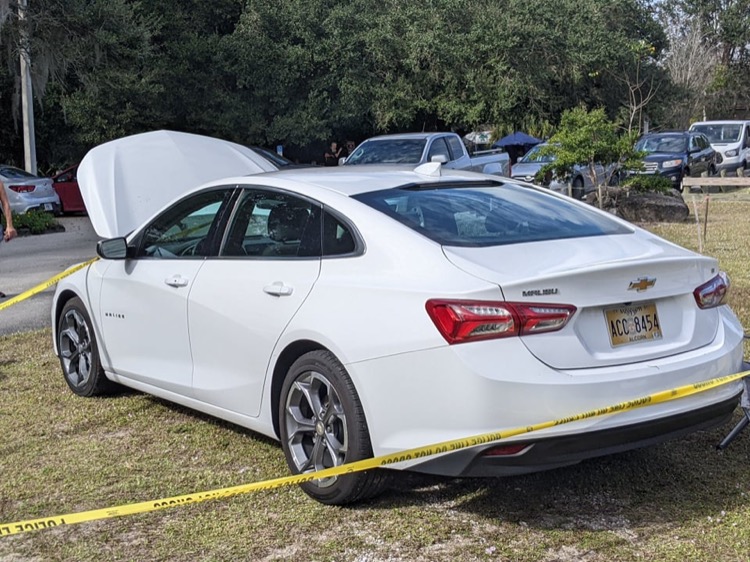 Blewett’s rental car, a white Chevrolet Malibu, was still at race parking, with his cell phone and I.D. inside.
Photo courtesy Matt Mahoney.

The Ancient Oaks 100 is run every December from 7 a.m. on a Saturday to 3 p.m. on the following Sunday. The course is a well-trafficked and short set of trails underneath towering Cabbage Palms and Spanish Moss-strewn Live Oaks. The 470-acre forest is bisected by the Atlantic Coastal Ridge, which gives the race it’s only hint at elevation – 15 feet. According to Runsignup.com, the loop, “consists of a small section of asphalt pavement, sections of sand and grass two-track, rolling wood-chip trail sections, a short section of concrete path, a section of twisty, rooty single-track trail, two boardwalk sections, a short bridge, a sharp 15-foot hill and some sections of loose sand.”

Veteran of over 80 ultras, including a 1999 Leadville finish, Blewett would surely have known how to get help if he were in extreme exhaustion. There were two aid stations on the course and four timing mats. Melton said Blewett, “made a point to tell us he gets easily disoriented at night and wanders off course.” While strange things have been well documented regarding runners who become overly exerted, the simple nature of the course and lack of any sign of his whereabouts have left a heavy air over the runners, especially Melton. “I’m completely heartbroken and devastated.” 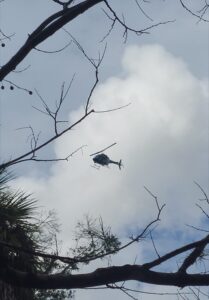 A possible danger on course is wild boar. Young piglets were filmed on the course early on Saturday. “Attacks on humans are rare, but can be serious, resulting in penetrating injuries to the lower part of the body,” according to INaturalist.org. However, Mahoney has run this race 15 times and never had any problems with the wild pigs. “They usually just run off.” Melton has come across groups of them numerous times. “I saw a couple of 100 pounders cross the trail but never felt threatened by them.”

Most boar attacks happen during rutting season, which is from November to January (now) and usually occurs between a sow and her piglets. “Feral swine have been aggressive towards and even attacked farmers, golfers, hikers and picnickers,” says the U.S. Department of Agriculture. “Aggression can be increased when they associate people with food because of handouts and improper waste disposal.” In Florida, up to 67 counties have seen wild pig incursions.

In 2019, just 40 miles south of the race location, a trapper was mauled by a wild boar while attempting to keep it from some kids at a bus stop. Boars have razor-sharp tusks that can easily reach seven inches in length. If Blewett had been gored, surely a fellow runner would have seen or heard something. However, if he had run from the course in an attempt to flee, it could explain the difficulty in finding him if he were unconscious in thick underbrush. Yet, the bright coloring and reflective quality of his top should have made it easier to find him.

“I think there’s a chance he’s outside the park,” Melton says, “But it’s a slim one.” The more realistic possibility is that Blewett had some kind of medical incident. Melton noted an email Blewett had sent before the race that stated he was immune suppressed. The race director also described Blewett acting erratically Saturday evening. He was last seen finishing mile 55 at 9:35 p.m. Having already run off the course once, one staffer believed he looked disoriented and warned him not to go back out. But she didn’t know if she had the authority to stop him. He started lap 17 on the 3.46-mile course then vanished, never making the first timing mat. 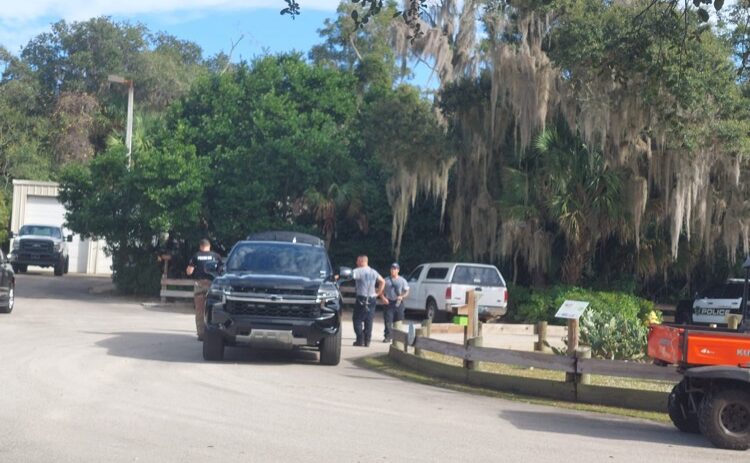 Shortly after 5 p.m. on Sunday, search and rescue was called off for the night, set to resume at 8 a.m. Monday morning. While the police are well versed in these matters, it always strikes a writer as odd that when it is clear, not just probable, that someone has gone missing, that such a search and rescue would be called off at dark. “If he is alive right now, he might not be tomorrow,” says Melton, referring to the omnivorous nature of the wild pigs. However, he is quick to add that he sees no evidence that the police have been sloppy or careless in their approach. “They arrived on scene in less than two minutes.” Still, he admits that their timeline to resume the search at 8 a.m., an hour after sunrise, is a headscratcher. Where is the sense of urgency? They must assume he’ll show up somewhere. Prayers from the ultra community are vectored toward the Eastern Coast of Florida in hopes that he will do just that: turn up, asleep in someone’s home or in a friend’s car.

A statement from the Titusville Police Department late Sunday: “He [Blewett] was last seen wearing a neon green and yellow tank top, black shorts, black waist pack, small light and possibly glasses.” The press release went on: “Anyone with information on the whereabouts of Blewett is asked to contact the Titusville Police Department at (321) 264-7800.”

Earl Linwood Blewett has a PhD in Veterinary Microbiology and is an Associate Professor of Biochemistry and Microbiology at Oklahoma State University.

UPDATE:  Blewett was found Monday just after 8 a.m. EST not far from the race course behind a local business. Police say he was disoriented and has been transported to a local hospital with non-life-threatening injuries. He had been missing for 36 hours.

Um. They should be out there round the clock looking for him in search and rescue mission

Found! Fortunately, he has non-life-threatening issues. Disoriented in Titusville it appears, taken to hospital.

This guy is alive and left

My wife said Blewett is an RD for a 50K in Oklahoma, and also volunteers at Pumpkin Holler race, so he’s fully in the sport.

Report from this morning is he was found! https://www.wesh.com/article/titusville-police-search-for-runner-who-went-missing-after-100-mile-race/38561131

He left, he doesn’t want anyone to know where he is, another chapter in his life.
He met someone else and probably in another island already, definitely took a private boat.

Earl was my student – he got his Masters’ and PhD in my lab at the University of Saskatchewan in Canada. He is an amazing person and a very experienced long-distance athlete. I am so glad he is OK. Keep on trucking, Earl – all of us at the U of S are cheering for you and wish you a rapid recovery! Vikram