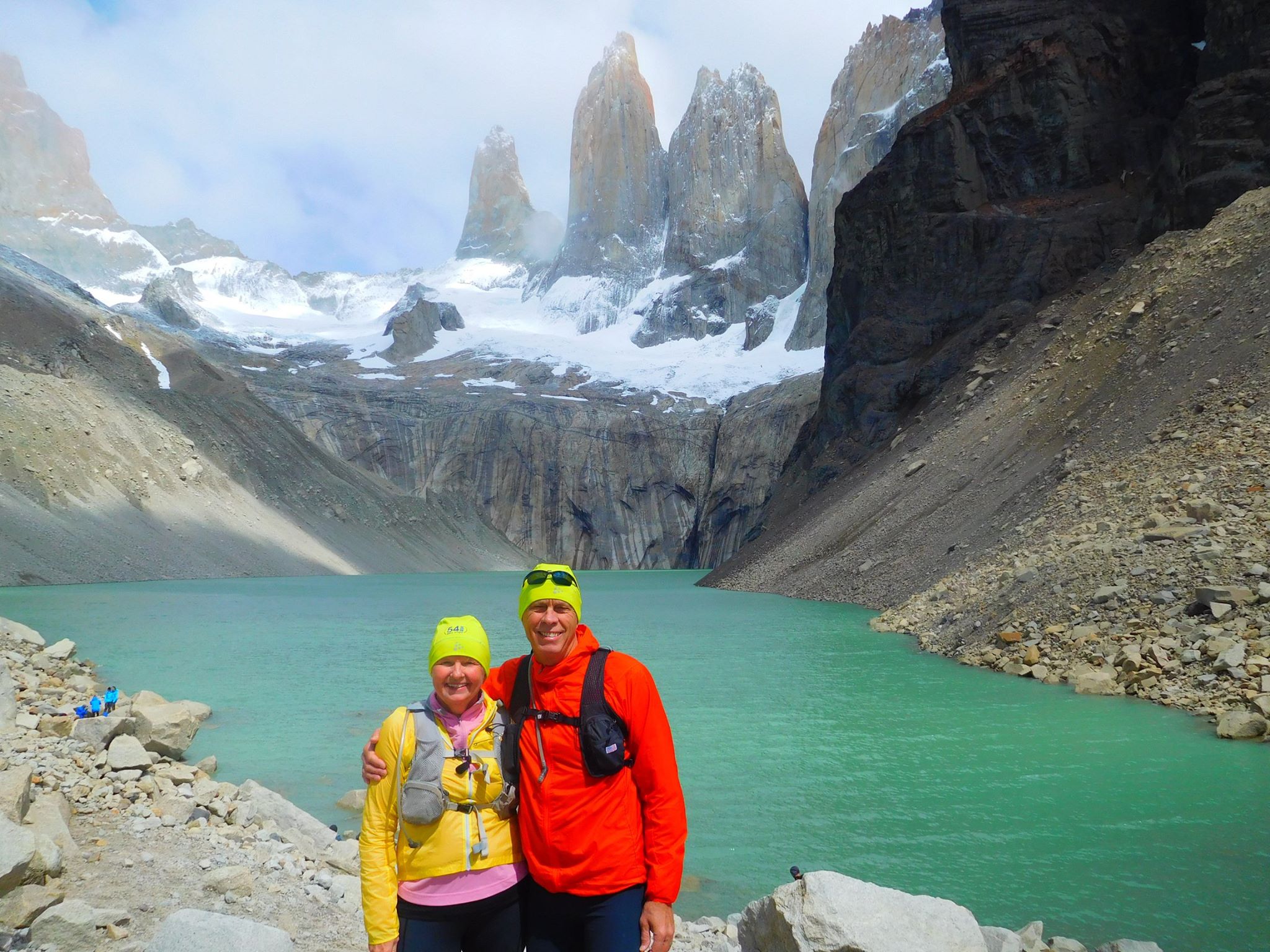 Dan and Kathy Harshburger in Patagonia (Chile) at the Towers of Paine at Torres del Paine.

This is part 1 of a 2-part story, with the second half to be published next week.

Dan Harshburger and his wife, Kathy were climbing Paso del Viento (Windy Pass) in Argentina’s Los Glaciares National Park, overlooking the South Patagonia Ice Sheet on a recent running vacation covering trails throughout Patagonia.  Due to severe winds, he told her they would have to crouch down as they reached the summit of the Pass.  But as Dan looked back, Kathy was being lifted up off the trail as the wind whipped furiously.  Instincts kicked in for Dan, a veteran ultrarunner with over 32 years of experience on the trails.

Dan started running with his wife Kathy in 1980.  After a brief four years running road races, they were introduced to the trails in Southern California by a group from a local running store. Not long after, Dan was invited by ultrarunning legend, Walt Johnson, to run the Grand Canyon Rim to Rim to Rim – his first ultra marathon in 1984. He finished in 12 hours and 2 minutes.  Dan was hooked.

Dan and Kathy Harshburger in Patagonia (Chile) at the Towers of Paine at Torres del Paine.

Three years later, Dan and Kathy continued running both trails and roads after Dan was transferred to the East coast for work.  He explored the ultrarunning scene in the East by running Old Diminion 100-miler in Virginia, Ice Age 50 in Wisconsin, and ran Kathy’s first with her – Valley Stream 50-Mile, a 1-mile loop, in New York.

Back then, ultrarunning communities on each coast were much smaller than they are today. Trail runners carried Aunt Jemima syrup bottles for water, packages of honey (similar to ketchup packets), rock salt, and PayDay candy bars.  There were no technical fabrics or fancy hydration systems, so runners experimented with new things to get them through the miles while out on the trail.  Just by word-of-mouth, they dialed in how to fuel and rehydrate on longer runs.

Dan and Kathy eventually moved their family back to California in 1990, and stayed there for 14 years until they moved north to Central Oregon, where they retired. Since then, they’ve become prominent figures in the Oregon running community, not only due to their frequent participation in running events, but their hours of volunteer work at races, and for local running and cycling clubs.  If you’re familiar with the ultrarunning community, you’ve probably met Dan or Kathy.

As a 68 year-old ultrarunner, Dan states that his reasons for such longevity in the sport are due to his “mid-pack” pace, and his wife and running partner, Kathy.  He says that his most memorable running moments are the ones they have shared together – like her first 100-miler, Rocky Raccoon. Memories that even top his nighttime encounter with a rattler during Western States.

*Read part 2 of this story next week.