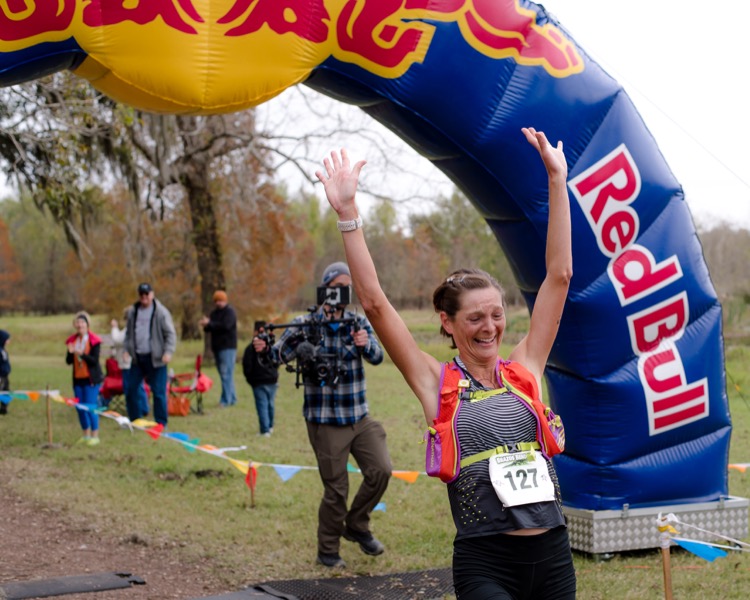 Robert Goyen, Race Director for Trail Racing Over Texas, announced over the loudspeakers “…cheering in the American Record for the 50 miler – great job Caroline!”

This epic adventure began three weeks prior at the Wild Hare 50 which was to be my last big training run prior to Brazos Bend 100 Mile (BB100). While Wild Hare was only to be a training run, the target was actually a top five finish. 31 miles into the race I began noticing significant discomfort in my achilles and made the decision to end the race with a 50k PR rather than to risk injury that could potentially take me out of my BB100 race. As expected, I kicked myself the entire way home knowing that I would have gotten a 4th place finish at Wild Hare and a new personal record for both the 50k and 50 mile (all while on a training run).

On November 29, at the direction of my coach I visited the doctor to check my achilles. The doctor had significant concern that I had a potential tear in my achilles which would block me from making it even half way through BB100 without serious injury. I left the doctor with an MRI appointment for December 16 and chalking up a future DNS at Brazos Bend 100. The previous year of training was leading up to this single race, and in an instant it was taken away. My dropping from Brazos Bend 100 resulted in a silver lining I could never have imagined: on November 30 I was asked to crew Caroline Boller during her 50 Mile American record attempt. I am thrilled everything played out the way it did.

I am probably borderline OCD when it comes to planning, data analysis, and tracking “stuff.” I began working with Caroline right away to make sure she had absolutely everything she needed to make her record attempt a success. Together we worked through her nutrition plan, race goals, likes, dislikes, what has worked and what hasn’t, and every little detail I could possibly learn about her in just nine days. I even had a lengthy discussion with my coach Karen Kantor just to make sure there was nothing that I may be missing and to hear her thoughts and perspective on things.

Over the years I have crewed a lot of different runners and have learned so much about crewing from watching Meredith Terranova crewing her husband Paul (and vice-versa). They are so in sync when it comes to crewing because they KNOW one another. They know how to pull each other through the lows, how to keep one another focused, and how to get one another through a race seamlessly. In my eyes, this is the standard when it comes to crewing and I had to do the same.

For the next nine days leading up to the race I monitored the weather models and provided continuous updates to Caroline on the condition of the trails, weather, and any and all course changes. Once we were confident on the weather and course, Caroline put together her final race plan. I began detailing out the race and the aid station transitions down to the minute, including determining the time I had to transition between aid stations given the 10 to 20 mph speed limits enforced in the park. Once my planning and analysis was complete, I printed out numerous race cards (which my wonderful wife Elizabeth even laminated) to put in the drop bags and in the vehicle, so there was always a point of reference along the way.

These details made me realize that with Caroline’s planned pace I would not be able to make it between two aid stations (the start/finish) before she did, and this start/finish aid station was a major transition point! My son Anthony, who was going to originally pace me at BB100, offered to assist. In order to do this, it meant that at three points during the race I had to run from one aid station to the next carrying her drop bags and get everything ready for her arrival.

In the last few days leading up to the race I mentally rehearsed the entire plan to make sure everything was accounted for. If I (or my son) was off in the slightest, it could result in minutes being taken away from Caroline’s finish time. People who know me know that I wasn’t going to let that happen. With 11 aid stations, even just five extra seconds per aid station was going to be an extra minute. My goal was zero extra seconds per aid station.

Friday we made arrangements to meet at packet pickup for one final walkthrough of the race, make sure we both had everything we needed, hand over drop bags, and make final coordination for race day. This is when yet another silver lining presented itself. While I was at the registration table, Caroline told me to pick up a pacer’s bib to pace her on her final loop. Really? Without a moment of hesitation, I gladly signed the waiver and picked up my bib. Really, I was going to pace Caroline as she set an American record. My plan was to only go out with her if things were looking bad and she needed a pacer. I knew how my achilles felt and knew what distance I could cover at a sub-7 minute pace before pissing it off really bad. I knew exactly what was on the line for Caroline and what her goals were going into this race. I had determined at what point I was going to push that threshold and pace her. My job was to get her across the line and set an American record. While she never needed me to pace her and was well ahead of the goal, I do regret not taking her up on the opportunity to pace her for the historical event. That’s ok though. Next time I WILL pace her.

The 50 mile race was going to begin at 7:00 a.m. but I had plans to be at the start line at 6 a.m. to see the 100 mile runners off. As I had done the year prior (and will do every year hereafter), I had come to the race dressed as The Grinch to lead runners across the start line. I dress in costume for every race that I volunteer at for Trail Racing Over Texas. It is a way to motivate the runners and make everyone smile.

The Grinch is ready.

Shortly before 7:00 a.m. Caroline arrived at the start line ready to go. We synced up briefly to make sure there were no changes in the plan, see how she was feeling and if there was anything I needed to know about. She was rock-solid and ready to go. The only thing left to do was hammer down the trail. Like I had done with the 100 mile runners, I took off down the trail with some amazing runners in tow. It was officially time to put the plan into motion.

Caroline was going to be running three 16.67 mile loops and the plan was to meet her at three aid stations per loop in addition to the start line. Taking into consideration her planned pace and the 10–20 mph speed limit within the park, we had to move quickly.

At each aid station I was ready with her planned replacement bottle and everything extra in hand that she may need. Luckily all of the aid stations where positioned in such a way that we had a 50–100 foot warning before she arrived. As planned, each aid station transition went flawlessly. Caroline was able to move through, grabbing her replacement bottle and an update on her time without breaking pace. With each passing aid station, the gap between her current time and goal time grew. By the final few aid stations she was 11 minutes ahead of her goal time.

After my last aid station transition I ran back to the start line with Caroline’s drop bag and warm clothes to prepare everyone at the start for her arrival; based on her pace I had estimated her arrival at the finish around 12:47 p.m. As the last few minutes ticked down, Robert announced that Caroline was on her way in and would be, in a few minutes, breaking a 20-year American record. Everyone with a camera began crowding around the finish line, including the camera crew from Sierra Films to capture this historic event. Luckily Anthony arrived just a few minutes before Caroline finished so he was also able to witness her crossing the line and take pictures too.

I grabbed Caroline’s finisher medal and Robert Goyen and I stood in the middle of the trail waiting as Caroline made the turn toward the finish line. Caroline crossed the finish line at 12:48 p.m. and set a new American women’s 50-mile trail record with a time of 5:47:01 and also set a new course record beating Ford Smith’s 2014 time by only nine seconds.

It was an absolute honor to be asked to crew Caroline and to experience the raw emotion as she crossed the finish line setting the new American record is something that words simply cannot explain.

Team Caroline and the end to an extremely memorable race. Photo: Anthony Stasulli