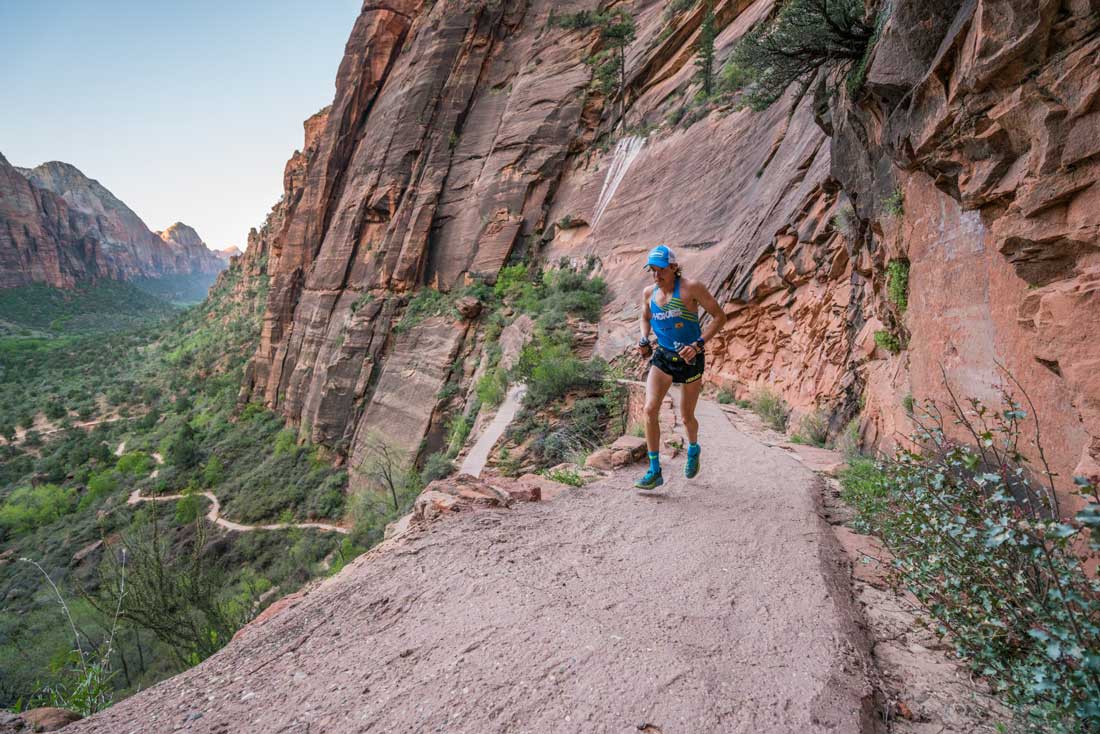 In this edition of Quick & Dirty, I chat with Hayden Hawks, who recently shaved more than a half hour off the Zion Traverse FKT. Hawks completed the 48-mile crossing of Zion National Park in 6:50:49, beating the previous record of 7:22:08, held by Mike Foote and Justin Yates. To commemorate Hawks’s FKT, his sponsor HOKA ONE ONE donated $10,000 to the National Park Foundation.

Hawks, who hails from nearby St. George, Utah, ran for Southern Utah University, graduating in 2016. His ascent in the mountain, ultra, and trail running space has been rapid. After winning the Speedgoat 50K last summer, Hawks has finished second in record-breaking duels with Zach Miller at the TNF 50 Mile (San Francisco) and Max King at the Chuckanut 50K.

In this interview, we talk about how Hawks almost inadvertently sabotaged his own Zion Traverse FKT attempt; what it means to be a soul runner; and Hawks’s running roots and future racing plans.

Quick & Dirty: Thanks for the interview, Hayden. Let’s talk about your recent Zion Traverse run. Obviously, growing up and living in St. George, you’re pretty close to Zion National Park. Had the FKT been on your mind for a while? When did you first decide that the record was something you wanted to chase?

Hayden Hawks: Growing up in St. George, I was working at the St. George Running Center at like 16 years old. People would come in all the time and talk about the Zion Traverse, and I’d run sections of the Traverse growing up, and also hike it. So I knew a lot about the Traverse, and I’d made a goal in high school that I’d like to run it some day. But I didn’t really understand the FKT thing.

Last year when I got into trail running, people kept coming into the store, and I kept hearing about it again. And I remembered I’d made a goal to do that. Then I started hearing about Jim Walmsley breaking the record on the Rim to Rim to Rim, and things like that. So I thought maybe I should look into an FKT run of some sort. I found out that the Zion Traverse had a pretty prestigious FKT, and I thought that it would be perfect. I could get the FKT and also accomplish this goal I’d set back in high school.

I actually had scheduled to do it last fall. But I started to talk to my coach about it, and we were prepping at that time for TNF [50 Mile in San Francisco], and we just didn’t feel like it was the right time. I’d never done a 50-mile run before and we thought it might be too much for me at that time. So we decided I’d schedule it for the spring.

I didn’t really train specifically for the FKT. I’ve mostly been training for my upcoming races—I’m running Transvulcania in May and I just got done with Chuckanut in March. Most of my training was centered on those races, but I knew that if I was fit enough to do well in those races I’d be fit enough to break the FKT on the Traverse.

As far as training specifically, I got a few runs on the route after the snow melted here. But I was mostly going out there just to check on trail conditions, to make sure the snow was completely gone.

Q&D: What was the hardest part of the run for you? Any unexpected challenges?

HH: Actually the unexpected challenge that was the biggest was two days before the FKT. I went out for a little training run in an area that I thought I knew pretty well. A buddy and I went out. We ended up doing some scrambling, and we actually ended up getting lost. I ended up running for almost 9 hours, and all I had was a little bottle of water with me. I ended up bonking super hard and didn’t get home until three in the morning. It totally beat me up. So it made me really nervous going into the FKT, as I felt really tired. I was wondering if I’d be able to do it. But I decided I was just going to gut it out, try my hardest to break the FKT and see what happened.

So from the start, I wasn’t feeling that great to be honest. Then towards the end of the run, I started really feeling it, at about mile 35. That’s right when you come into Hop Valley. From there to the end it’s 13 miles long, and it’s really, really sandy. Tons of sand, running through riverbeds, and I was hurting pretty bad those last 13 miles, just fighting as hard as I could.

I was pretty far ahead of the [previous] FKT at that point, so I knew I’d be OK, as long as I didn’t walk the whole last part. That was probably the hardest part of the FKT.

Q&D: Did you have support on the route?

HH: Yeah, there are three spots. The first spot is the Grotto, that’s about 12 miles in. Your next spot is at mile 26, and that’s Lava Point. And your last spot is mile 35, Hop Valley. So I did have a crew in those three spots—mostly just friends and family, local people from the community who wanted to come out and support me. So they just helped trade out my bottles for me and cheered me on. Other than that it was completely by myself, no pacers, just secluded by myself.

Q&D: Are you familiar with the FKT belt buckles that Rickey Gates and Elizabeth Thorp started?

HH: Actually I wasn’t familiar with it until last night. I got a message from Mike Foote [the previous co-holder of the Zion Traverse FKT], and he was like, “Hey, I’ve gotta send this to you; congrats!” He sent a picture of it to me and I was like, “Oh, that’s so cool.” So I think he’s sending it in the mail in the next couple days.

Q&D: Yeah, it’s a cool concept that those folks started. It’s such a small community of people who are chasing these things, it’s a neat trophy of sorts to pass around.

Q&D: I also wanted to ask about your sponsor HOKA ONE ONE, who donated $10,000 to the National Park Foundation in conjunction with your new FKT. What did that process look like—was the intent always to raise awareness for our public lands? How did you approach them about that?

I’m really lucky to have a sponsor like HOKA that supports National Parks. And I’m really hoping that from this whole thing that people gain a deeper love for National Parks—their beauty and the amazing things that the Parks and public lands have to offer.

I’d also talked to the guys and gals from Run Wild and teamed up with them. With Run Wild, HOKA, and myself, it was just awesome we all got together to make this happen.

Q&D: I’ve seen in a few places that you call yourself a soul runner. What does that mean to you?

HH: So I got that name back in college. We were all track & field and cross country guys at the time. The training for that is really focused, like an intense training regimen. But I was always a bit more free spirited. I’d go out and run trails, and I’d run just because I love to run. My teammates would be like, “Why are you running 20 miles a day?” But I just loved to run. I would go do my run, then join a few buddies for their runs. Sometimes I would run three or four times a day. And they called me a soul runner just because I loved running so much.

And it’s really true. I love running for what it is. I love exploring and being out in the mountains. And I’m lucky that my body can handle it, but I think it’s because I’ve maintained a love for running throughout my whole career. I don’t dread doing workouts or running up hills or mountains.

Q&D: Of course when you mention running three or four times a day, and in conjunction with the time you spent at Southern Utah University, my mind immediately goes to Cam Levins [the Canadian Olympian and multiple national record holder, who grew to prominence while running legendary, high-mileage weeks at Southern Utah]. Did you run with him at all? What was his influence on you?

HH: Haha, yeah, I ran about two years with Cam. That was right before he was doing the high mileage, and I was there when he transitioned to it. After Cam had so much success with that and did so great, my coach started increasing miles with the rest of the team. And I already loved running so much that I went to my coach and said, “You know, I’d like to try 150 mile weeks.”

My coach was like, “OK, let’s do it and see what happens. But I’m warning you there’s some risk in it—you could get injured or burn out.” And I was like, “You know what, I’m willing to take that risk.” It ended up working for me. I wasn’t quite to Cam’s level, but I did end up running pretty fast in college, and I attribute a lot of that to the mileage I was doing. 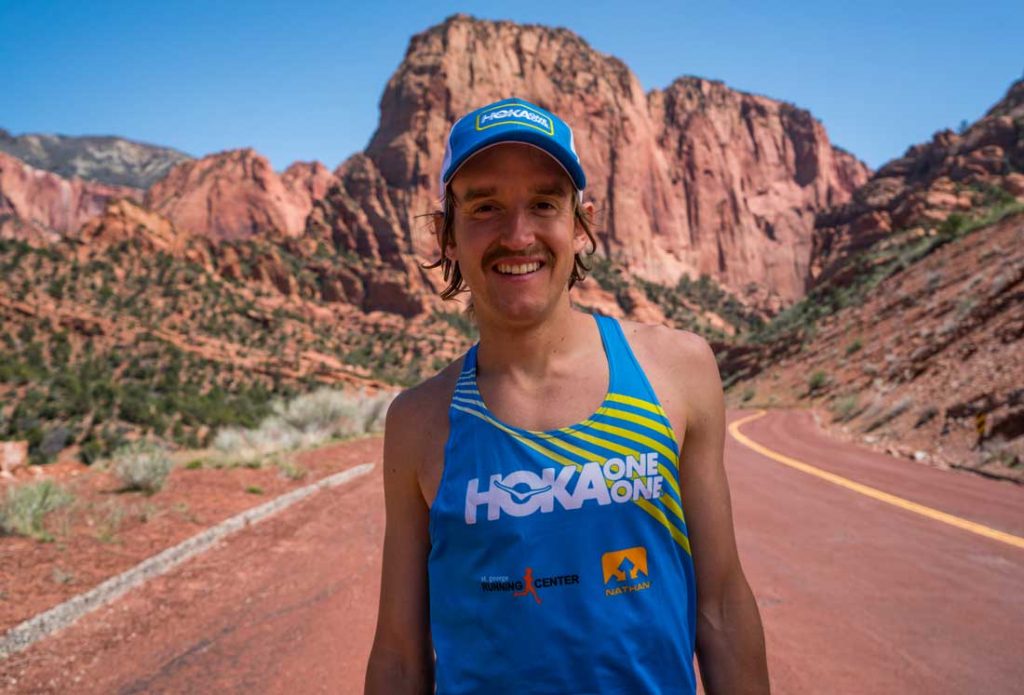 Q&D: I also wanted to ask about your upcoming schedule. You mentioned Transvulcania. With your previous runs at TNF 50 and Chuckanut 50K, you were selected for the IAU Trail World Championships, which is a 50k race in Italy this summer. And you’re going to run for Team USA at those championships, right?

Q&D: And I saw you were thinking of the CCC in Switzerland in September?

HH: Yup, still planning on CCC. And I’m doing Speedgoat 50K again in July too; I’ll try to defend my title there.

Q&D: I also wanted to ask about your experience on Team USA last year for the World Mountain Running Championships. You finished fourth place there, and led by Joe Gray’s win, the men’s team won the first Team Gold ever for the US. What was that experience like?

HH: That was an incredible experience. One of my goals my whole life was to make a US National Team. To make my first US Team was incredible. Then to go out and perform well and have the team perform well, it was amazing to represent the country and win our first Team Gold for mountain running. That’s actually what got my really excited for the IAU Trail World Championships this year. There are a lot of other races out there I could do, but I had such an incredible experience at the World Mountain Running Championships, I want to represent my country again. I want to try to win a Team Gold in the IAU Championships as well.