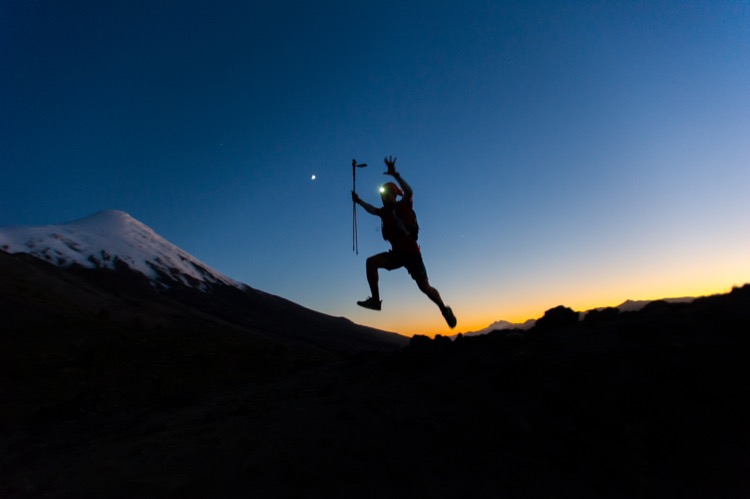 For many ultra runners Patagonia is a distant iconic image propagated by vivid imaginations of unscathed wild terrain and sharp edged peaks. A mysterious mountain running promised land of sorts, that has constructed itself upon years of whimsical exploration. Given Patagonia’s mystical appeal, it is no wonder why 1,638 people from all over the world traveled to the Osorno Volcano this December to run one of the various distances in the 2015 Volcano Ultra Trail (VUT) race series.

Standing 8,700 feet tall Osorno overlooks the Llanquihue Lake and Northern Patagonian town of Puerto Varas. It is evident from the moment you enter town, when the clouds clear, just how prominent this peak is relative to the surrounding geography. With an aspect of 6,200 feet the stratovolcano’s cone is covered annually by wind blow icy snow pack and plays home to a handful of communities who rest at its base.

Co-race director Horacio Lyon grew up in Puerto Varas and the volcano was a constant training ground for him and his friends from a young age. In 2013 Lyon and a group of locals decided to hold the first ever organized foot race on the Patagonian giant. By 2015, the 3rd edition of the Volcano Ultra Trail race series, Lyon and his co-directors had one of the largest and most competitive trail races in Chile and all of South America on their hands.

This year was the first running of the circumnavigating 100-kilometer Ultra Terra version of the Vulcano Ultra Trail series, which drew an internationally competitive field of experience runners. Colorado based mountain runner Joe Grant tied for first alongside the Canary Island’s Cristofer Celmente. Hot off a strong second place finish at this years Run the Rut 50k, Clemente traded the lead multiple times throughout the race with the HardRock 100 veteran Grant. The two finished side-by-side setting the course record for the 100k in a time of 12:31:45. Andrew Skurka rounded off the men’s podium finishing 3rd in a time of 13:24:41. The women’s race saw a dominant performance by Brazil’s Manuela Vilaseca, who led the race from start to finish (15:48:49). Having placed 10th at this year’s Ultra Trail du Mont Blanc, Manuela held a strong pace for the entirety of the race. Chile’s own Veronica Bravo finished second to Manuela in 18:09:25 and Argentina’s Laura Emilce was third in a time of 19:19:23.

As a result of this year’s eruption of Calbuco, a neighboring volcano – Osorno was covered in a thick layer of volcanic ash. This added element played a crucial part in the difficulty of the 2015 races. “The climbs were relentless, when you added the deep sand to the already steep race course – things slowed down tremendously” said Moises Jimenez of the North Face Chile who placed 2nd in the 73k ultra (9:29:59). Runner’s found themselves slipping down steep inclines while grasping for traction and fixed ropes on sand filled climbs. In addition to the added difficulty the sand brought, it was an unusually hot day – even by Patagonian summer standards. Temperatures reach 87 degrees by midday along the extremely exposed routes. Leaving runners fried after their final decent into the finish line that ended at the mouth of the giant glacier blue Petrohué River.

Perhaps one of the most intriguing parts about racing in this part of the world are the different ecosystems encountered throughout the course. From densely bio-diverse jungles to jaggedly sharp volcanic rock, the terrain at Volcano Ultra Trail leaves nothing to be desired. You get a taste of the vast natural variations within the Patagonian region. This year saw five respective distances: 100k, 73k, 42k, 21k and 10k, drawing runners from all around the world to the town of Puerto Varas pre-race day. Where the race organization held a pre-race day press conference and celebration in anticipation for the start of the 2015 races.

As one of the premier running events in Chile the VUT race series is a perfect blend of remote Patagonian wilderness and well-executed race organizing. The 2014 event was voted the best ultra trail running event in Chile and the 2015 event improved upon those numbers significantly. If you are looking for an international ultra-running adventure I’d highly consider putting the Volcano Ultra Trail race series on your calendar for December 2016. No matter what distance you decide on, just don’t forget your gaiters – you’re going to need them, trust me.

Thanks for sharing this great account Nico! Enjoyed meeting you down here in Chile.