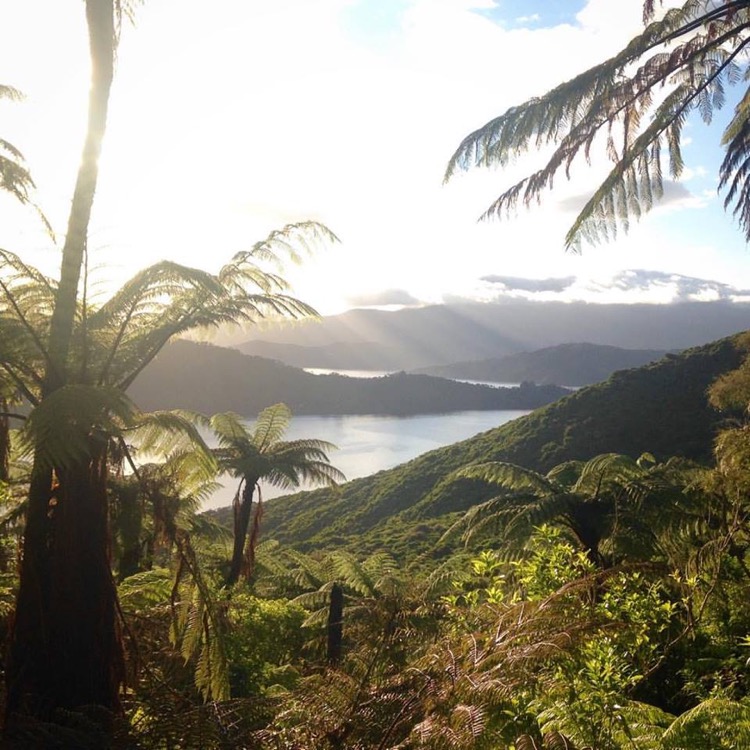 As the dust begins to settle from the the massive earthquake that struck near my New Zealand home and the tragic loss of a running friend in a motor vehicle accident, I have the space to pause and reflect on a bright spot of the last week: the 71km Queen Charlotte Ultramarathon. A few days before the quake struck, I joined a handful of other runners in this low-key unofficial race in the Marlborough Sounds. In what turned out to be a truly adventurous and testing day, I felt strong in an ultra for the first time in over a year and was able to set a new women’s FKT (fastest known time) and women’s course record for Queen Charlotte.

For those nine hours and two minutes of running, I took in the rugged beauty of the Marlborough Sounds, reflected on the bright spirit of the friend our community had lost, and found a new steadiness I hadn’t felt before. Instead of feeling tossed around by the highs and lows, by the pain and exhilaration that characterize a trail ultramarathon, I felt like the captain of my own ship for the first time in a long time – steering myself safely through the harsh elements, physical pain, and self-doubt that swirled and crashed like the sea below me.

But let’s start at the beginning.

I woke up on race day to the sound of torrential rain hammering against the large windows of my quaint Picton Hotel room. It was 4:30 a.m. and pitch dark. I was meant to get on a boat with a handful of other brave (or foolhardy) souls to be dropped at Ship Cove – a dock at the far end of the Queen Charlotte Track. In this self-supported low-key event, we were responsible for getting ourselves safely to Anakiwa, a small town 71 trail kilometres south of Ship Cove. Due to heavy rainfall in the week leading up to the event, the track would likely be slippery, muddy and mostly under water.

“What were we thinking?” I did have a moment of doubt as we boarded the Beachcomber motor boat in driving rain. The Queen Charlotte Sound looked rough and foreboding. Once we were underway, the bow crashed and lifted jarringly over icy grey waves, and dawn didn’t do much to lighten the sky. But we chatted with the dauntless enthusiasm and chuckling irony that characterizes our breed of ultrarunner and were in high spirits despite the massive low pressure system that swirled around us.

Just before docking at ship cove, I saw a pod of dolphins playfully leaping not far from our boat. The superstitious part of me that believes in omens (only the good ones, of course) was delighted and I knew it would be a good day.

At 6:33 a.m., the eight of us unceremoniously hopped off the dock, into the rain and onto the trail. We got to work on the first of countless steep muddy climbs and settled into a brisk pace that would warm us up quickly. I tried not to think about how many hours I would be wet and muddy, or about how many kilometres lay ahead and instead enjoyed the banter with my fellow runners as we eased into the day.

Just as I was starting to feel strong and shake off some early-race sluggishness, I felt a sharp jabbing pain on my chest and cried out. A wasp flew off. The little bugger had crawled under my running pack strap and stung me twice, right on the boob! I’m thankfully not allergic to wasps, but I knew it would swell considerably. “Get back here and sting the other one you little asshole!” All I could do was laugh, ignore the stinging, and carry on.

The next 50 kilometres felt very different from previous trail ultras. Instead of feeling slowly ground down and demoralized as the kilometres stacked up, the opposite happened. I started to come to life as it got more difficult. I shook off some of the heaviness of the last week as I focused on the task at hand. It felt so good to be out on the trails, surrounded by the majesty of the Marlborough Sounds, with nothing to do but run. My stride opened up as my competitive feisty-side woke up and I got to work on the long technical downhill ahead of me.

Settling into a rhythm, I reflected on the wonderful influence our friend Steve Neary had had on everyone he met. His infectious smile, adventurous spirit and commitment to the sport made him a cornerstone of the growing trail running community in New Zealand. I counted myself lucky to have known him, one of those rare gems who always leaves a place brighter than it was before.

At that point, I reached a section of the course where several groups of hardy backpackers slowly made their way toward the nearest shelter. A few of them cheered me on and called out “good running!,” and it made me smile. I was feeling really good and the cheers after so many hours of solo running were a welcome boost. I tried to enjoy it because I knew the pain would catch up to me eventually.

And catch me it did. At the 60km mark, it hit me like a cold hard wave. I peeked at my watch for the first time in a long time and saw that it was just after 2:40 p.m. My ideal day had me finishing around 3:30, and doing so would earn me the new woman’s FKT for Queen Charlotte (the previous record was 9 hours 15 minutes, set by Jean Beaumont). I hadn’t considered pushing for it until then because the trail conditions were so bad I thought it would be very slow going all day. But I found myself at the Te Mahia Saddle and Mistletoe Bay much sooner than expected.

Every part of my being wanted to slow it down, walk the climbs, and have a snack. But another part of me said “You’re so close you have to go for it. Don’t think, just go. Do what you do.” So I steered myself directly into the pain and picked up the pace, grinding out the climbs that normally would have felt like a nothingburger, and leaning into descents that made my feet scream, “you bitch!”

The pressure to keep up a more uncomfortable pace made me really really cranky, and I was dangerously hangry, as I’d just run out of food. But somehow I found a quiet corner of my mind, a place where I didn’t have to think, react or do anything at all except move forward. Sure enough, the miles melted by. When I reached a summit viewpoint that I knew was about 5km from the finish, I belted out an involuntarily and slightly scary sounding “fuck yeah!” and started hammering toward Anakiwa.

I finished at 3:35 p.m. I joined the four guys who had finished ahead of me – Roger, the Ben’s and Ian – in the small wooden shelter at Anakiwa. We shivered in our wet clothes, tried to stretch, and shared war stories of the day. Ben tried unsuccessfully to rustle up a ride back to Picton with any of the many tourists milling around the trail head. We were a soggy bunch, shivering, covered in mud and probably not the freshest smelling. I wasn’t surprised that none of the tourists were jumping at the chance to invite five muddy, crazy-eyed runners on board their clean, dry camper-vans.

Thankfully Ben Kepes’ legend-of-a-partner Viv offered to shuttle us back to our cars at Picton. So after a hot cup of coffee and bite to eat, I left the Queen Charlotte Track as unceremoniously as I had greeted her, but with a newfound love and respect for her lush native forests, skyline ridges, secluded coves, and restorative beauty.

The final few kilometres of an ultramarathon always hurt. A lot. Queen Charlotte was no exception, but for the first time in a long time, I felt stronger than the pain and was able to steer my mind toward what I love. Epic days on long trails with likeminded nutters. The overflowing satisfaction of crossing a hard-earned finish line. The tireless adventurous spirit of our community that breathes light and life into the day-to-day. My family, my friends and the wild ride we share.