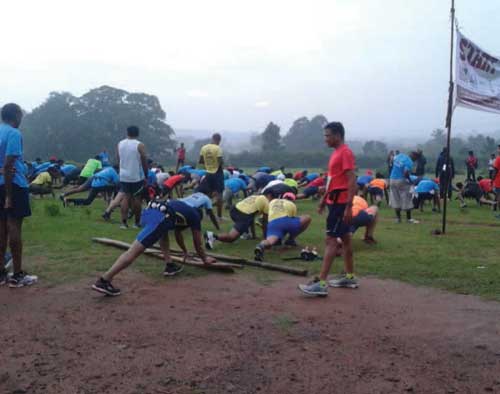 Two hundred and sixty runners shuffled nervously in the half-light of dawn before the start of the inaugural Javadhu Hills Ultra (JHU) in a forest in Tamil Nadu, Southern India. It’s a remote location. The nearest city is five hours’ drive. The nearest town with any form of accommodation is 90 minutes away. Many camped overnight at the start line.

The JHU is the brainchild of Belgian Peter Van Geit, a 16-year resident of India. A love for the outdoors led him to set up the Chennai Trekkers Club, which organizes outdoor events for people in the city.

The logistical difficulties of the location have meant that, this year, the maximum distance was 50k but plans are to extend the event to 75k and 100k in future years. Despite the remote location, 40 people signed up for the full 50k distance, the majority from the closest cities of Chennai and Bangalore, but also some from smaller towns and rural areas. Compared to runs down on the plains, the temperature is very pleasant, and in fact at the higher points of the trail at just over 1,000 meters, it becomes a little chilly.

The course is a 25k out-and-back loop, mainly comprised of dirt jeep tracks, in places muddy and eroded by the monsoon, other sections made up of sharp granite rocks, which prove punishing, particularly on the descents. One runner’s shoes disintegrated by the 25k turnaround point, prompting him to borrow the race director’s shoes for the return leg.

Crisscrossed by streams, the route passes through small tribal villages, the residents of which watched in puzzlement as the long train of runners filed past in the early morning mist.

The eventual winner was Deepak Mahasavade, a runner from Bangalore, in a time of 4:41, at only his second time running this distance.

A week later I was standing on the sidelines at the eighth running of the Bangalore Ultra. This is the big one. India’s first and oldest ultra.

Runners for Life (RFL) set up the Bangalore Ultra just seven years ago and had an attendance of only 247 runners. It has now grown to a two-day event including a 24-hour run component. This time 1,500 people attended over the two days, with 273 runners registered for the ultra distances alone, the largest ever gathering of ultrarunners in India.

Beautifully organized, the event has a party-like atmosphere, with large speakers pumping out rock music at the start/finish line, the surrounding trees lit up with green floodlights and crowds of friends and family cheering on runners as they complete each loop.

Run on a forest trail on the outskirts of Bangalore, it comprises a 25k loop, which progressively becomes shorter as the day wears on so that for the night portion runners are not stuck out in the forest. Although it is mostly f lat terrain, the course is still tough with the uneven surfaces and the daytime temperatures touching 30 degrees Celsius. The 100k was won with a time of 10:32:06 by Abbas Sheikh, a runner from Mumbai, who ran barefoot!

The previous 24-hour record of 161k was smashed by Dan Lawson who ran 226k, setting a new India record. In fact, this year the top four finishers all ran over 161k. An experienced ultrarunner, this was Lawson’s first ultra in India and after the race he commented that he had never run a race that gave so much support and love. His sheer pace and friendly, anything-goes attitude made him a crowd favorite and other teams were soon sharing their food and drink with him and cheering him on each time he passed, as he had no support crew of his own and had lost his food bag. After 24 hours of running, and despite no sleep, he stayed behind to encourage the 12.5k and 25k runners racing the next morning, high-fiving them as they crossed the line. He’s truly an incredible human being and an inspiration to all the runners who competed over the two days.

RFL has thought about making a really challenging ultra-course like some of the races overseas, but their aim is to encourage more people into the sport rather than put them off.

And it seems to be working. In a country where running is normally only a means to catch the bus or to get to school in the village, the growth of ultrarunning is surprisingly rapid. There are now more than 10 ultra races planned in India for 2015 alone.

Kavitha Karnapathi, who runs Globeracers, another company very active on the ultrarunning scene for the past five years, says, “India is going through a discovery phase. There is huge interest in ultrarunning in the country but we are still 20-30 years behind the West in terms of knowledge and understanding of the sport.” However, she feels this is rapidly changing, and in an effort to increase awareness, Globeracers is planning an ultrarunning festival in 2015 where they will invite ultrarunners from around the world to talk about the sport, to hold workshops and take part in racing events.

With many of the larger running equipment companies looking to break into the Indian market, hopefully sponsorships will soon follow, as there is a lot of raw talent without the financial means to travel and compete around the country.

There is no doubt that with these solid beginnings, the rate of growth in the sport in India will be rapid indeed.