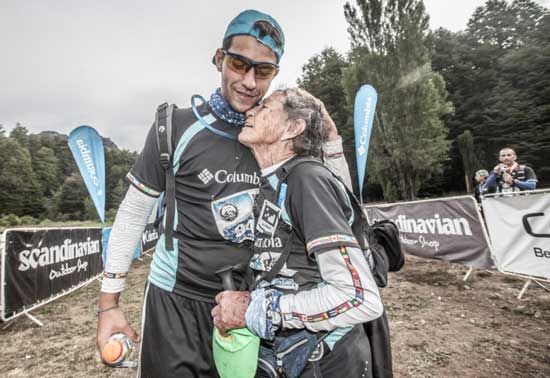 At 80 years of age, Elisa crossed the finish line of ‘El Cruce’earlier this month. She had run for three days, crossing from Argentina to Chile, through the Andes mountains.

This arresting image was taken shorty after. It captures that familiar cocktail of relief, exhaustion, and endorphins just beginning to take a grip on the body. The feeling of having given a race everything. Or just, more simply, a feeling of being alive.

Elisa Forti with her grandson Lihue

Elisa started running when she was 62 years old, having always been active. A friend had entered a 10km trail race and, although there were no places left, she decided to start training at her friend’s running club, and planned to run the event without a number. On the day of the event, she arrived at the 10km finish line comfortably. When she saw other runners continuing on a 28km loop, however, she recently related when interviewed “Well I’m not stopping here, I’m going to keep on going until I’m done!”

After this, she began to train more seriously and regularly, and completed her first marathon the following year. She is self coached and trains by the river for an hour each day, adjusting her training to the skills she requires for her next challenge. The river valley has some short climbs, steep descents and a section with stairs which she runs backwards sometimes to work different muscle groups.

However, listening to Elisa talk about running, you do not get the impression that she easily rises above all those obstacles, that we ourselves can imagine would stop us running once in our ninth decade. “If a knee, or your shoulder or your elbows hurt, at my age, that’s normal”she says. With a stoic laugh she adds “and if you can keep it at that pain level – that’s fine.”Indeed, the everyday struggle faced by many runners to find the time and motivation to train is something she also wrestles with. “When I am pulling on my shoes before a training run”she admits, “I think to myself, ‘why am I bothering!’”

What ultimately motivates Elisa to lace up, however, is what she describes as the “special incomparable peace and tranquility”received from running “that allows me to confront anything. It gives me freedom. Freedom from any tensions and pressures. Afterwards, I came back very relaxed, at peace with the world, with nature, with everything.”

It took five years before Elisa had the courage to sign up to run ‘El Cruce.’In the days before the race she admits to an attack of nerves and relates how she criticised herself:

“What an idiot! What have I done? What an embarrassment! What arrogance”before adding with a chuckle that: “The truth is, I feel like this before every race, but this time, the feeling was stronger!”

The first 20 mile stage passed without too many problems for Forti, but the second 20 mile stage was very testing.  At one moment she recalls shouting “mountain, come on! Why don’t you go downhill for a bit?…but it just kept on going up.’”

The last day of 40km was all guts. Elisa was lifted by the gift of words, drinks, bread and sweets that the spectators offered her. “Come on Elisa”she recalls them saying with a smile, “don’t be lazy!” She was still running the downhills, and whilst eager to finish, she had to tell her nephew on the flats and ascents, “Don’t let me run!”Her overall tactic she revealed was simple – ‘I never stopped once.”

Forti was clearly overwhelmed at the finish line and says how she found it hard to take it all in. She could hear the crowds cheering her in, from 3km out. When the race director embraced her and passed her the microphone she was heard just saying very quietly: ‘gracias.’

Later, she reflected on this moment and said:

’I feel like I have accomplished a great challenge for myself and realise that this applies to many other things in daily life. When you want to do something enough, you always have time. When you are enthusiastic, and when you plan and bring everything together: then you are living.”

She intends to take sometime off now to “charge her batteries.” Forti is not planning on stopping running anytime soon.

Do we as a society allow our expectations of ageing to dictate what we are capable of doing?

Does physical peak usually coincide with peak accomplishment in our lives?

Matt Maynard has a life-long love of adventurous sport and travel. He has climbed rock faces around the world, cycled his bicycle across South America and finished 8th last year in UK 50mile championship. He is a classroom teacher who needed to escape outdoors, and is happiest when helping others to pursue the same passion. Originally from the UK, he is based in the foothills of the Andes near Santiago, Chile. He is working on opening new trails at the moment, which inludes a new VK route from his front door and has recently launched his trail running guiding service called greenbeantrails.

Bravo Elisa! With a good mental attitude and working body parts it does not matter your age. Societal norms may keep many from challenging themselves but the ones that step out of that mold give the rest if us inspiration and something to look forward to!

She really is an inspiration as you say Debbie! Let’s hope we can break that mould too!

At 50, I have health and peace because of running, and I am fortunate to now run further than I ever thought possible for me. I know younger guys that have surrendered to some vague age expectation that they shouldn’t push themselves. The limitations are personally imposed…society cannot tell us how to act. I will run until I can’t.

Thanks for sharing your experience Andrew. That’s great that running brings you so much, like it clearly does also for Elisa. Matt Maynard