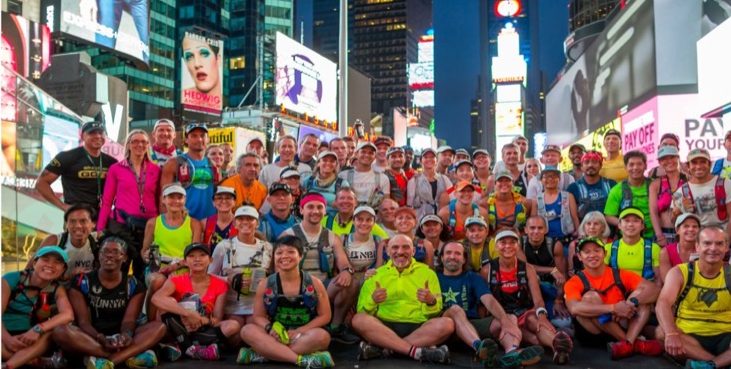 By Kenneth A. Posner

Visit New York and you’ll find a variety of trail and ultra events, a passionate running community and some very special history. New York City’s Ted Corbitt (1919-2007) is remembered as the “father of long distance running.” Corbitt set records at multiple distances (including 50 and 100 miles), was the founding president of the New York Road Runners and helped plan the New York City Marathon. But he’s probably best remembered for his remarkable 200-mile training weeks. The City is home to another very distinctive event, the Sri Chinmoy Self-Transcendence 3,100 Mile Race, which takes place on a single city block in Queens from June through August.

For those who can’t take off the whole summer, American 48-hour record-holder Phil McCarthy created the Great New York Running Exposition, a grand tour of the five boroughs, with 100k and 100-mile distance options. Helping Phil direct this race is the legendary Trishul Cherns, whose resume includes 244 successful ultramarathons (he’s run the Sri Chinmoy event three times). Trishul’s a trove of advice, both practical and spiritual; he will encourage you “to run with joy in your heart.” This is easy to do in the City, which is an urban running wonderland with major parks, countless bridges and a 35-mile greenway circling the island.

The City is also the gateway to the Hudson Valley, which has become a trail-running mecca. “We are still in Eden,” wrote Thomas Cole (1801-1848), founder of the Hudson River School of Painting, referring to the stunning natural beauty of the region. City dwellers need only cross the George Washington Bridge to find the Long Path, New York’s signature 358-mile trail, waiting to take them through the Hudson Valley’s most beautiful wilderness areas. The Long Path’s first few miles run along the Palisades, a line of granite cliffs towering over the river and offering spectacular views. Torr Duer, coach of the Brooklyn Trail Runners, loves to take groups out for training runs on the Long Path, explaining, “It’s a great out-and-back trail, because it starts out mild and then gets technical the farther north you run.”

Follow it north and the Long Path narrows into a single-track path, and then it takes you into a realm of glacially scoured ridges and quiet valleys. This is Harriman State Park, just a few miles north of the City, and home to one of the region’s largest trail running events, The North Face Bear Mountain Endurance Challenge. There are trails on the other side of the river, too, including one of the Hudson Valley’s most popular hikes: a nearly vertical 1,000-foot scramble up Breakneck Point. Red Newt Racing has created a very challenging marathon going up this scramble, possibly one of the nation’s toughest: this year’s winning time was five hours and four minutes. 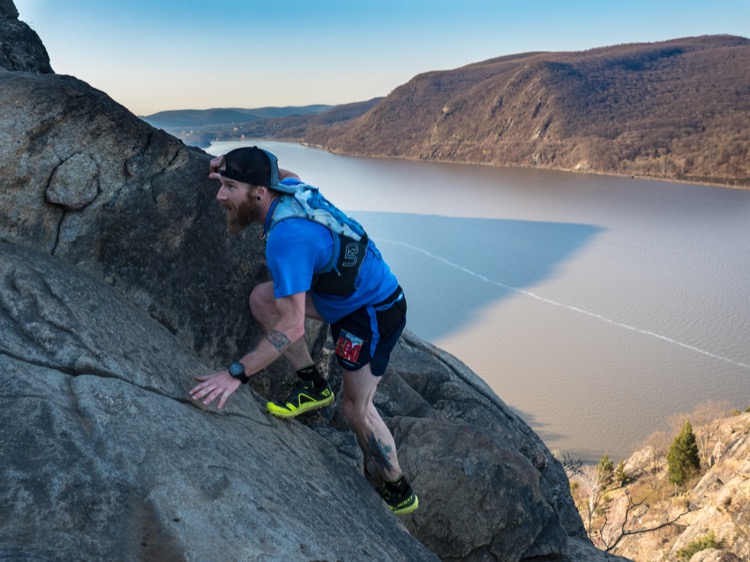 From Harriman, the Long Path climbs into the Shawangunk Mountains, or the “Gunks,” a ridgeline of stunning white cliffs and rare pitch pine barrens which the Nature Conservancy calls “one of Earth’s last great places.” Crossing the ridgeline is a magical footpath aptly named the Shawangunk Ridge Trail, which takes you past cliffs, waterfalls and wetlands and finishes on a restored railway trestle high above a mountain river. The SRT Run/Hike offers participants an epic 70-mile traverse of the entire trail (or shorter options) in an adventurous unsupported format.

In the northern Gunks you’ll find a network of nicely groomed, easy-running carriage roads in the Mohonk Preserve and Minnewaska State Park. Taking place here is Rock the Ridge, a 50-mile fundraiser with a 24-hour time limit and a very friendly first ultra. Over the last five years, Ridge Rockers have raised a total of one million dollars to preserve the natural environment and for other good causes. 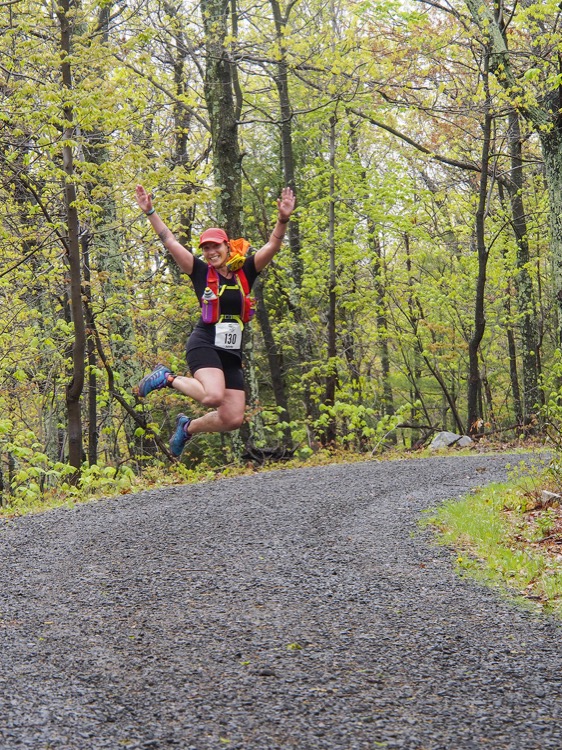 From the Shawangunks, the jagged mountain walls of the Catskill Mountains loom above the horizon, dominating the landscape. For your first taste of the Catskills, try the region’s classic event, the Escarpment Trail Run, now in its 14th year. It’s 19 miles of rugged, remote and sometimes treacherous trails, which race director and coach Dick Vincent warns are suitable “for mountain goats only.”

Thirteen-time winner Ben Nephew offers: “The Catskills’ combination of rocks, roots, moisture and steepness requires an extreme level of commitment and focus. Running the Catskills is both mentally and physically draining.” Ben has fastest known times throughout the Northeast, including one of the Catskills’ most difficult trails, the Devil’s Path, so-called because early New York settlers thought the Devil had piled up the rocks to create a personal refuge. Before taking a shot at Ben’s FKT, you might want to run Manitou’s Revenge, a 56-mile race which covers a portion of the Devil’s Path – but don’t forget your headlamp, as you’re unlikely to reach the finish before dark.

From the Catskills, the Long Path heads farther north until it reaches a line of cliffs. This is the John Boyd Thacher State Park and home of the Thacher Park Trail Running Festival, organized by Albany Running Exchange, with distances ranging from 5k to 50k. In the distance you can see the Adirondacks and New York’s High Peaks. There are great races there, too, including Whiteface Sky Races, which is part of the US SkyRunning Series. And there are great races even farther north, for example, the 100-mile Beast of Burden, which takes place on the Erie Canal towpath, near Niagara Falls, which is held twice a year so participants can appreciate both the heat and the cold.

New York offers a huge variety of beautiful places and challenging events, plus the inspiration of great runners past and present. Just put on your shoes, you won’t go wrong.

Kenneth A. Posner is race director for the SRT Run/Hike and co-director for Rock The Ridge. He is also the author of Running the Long Path: A 350-mile Journey of Discovery in New York’s Hudson Valley.

rock on – dont foget upstate and the finger lakes which arguably have the best trails in the state http://www.manyonthegenny.com http://www.twistedbranchtrail.com and http://www.trailsroc.org tons of stuff in the state –

Phenomenal. Well written. A beautiful description of a few of the many trails and ultra races we have in New York. We are all so lucky to live in an area where trail-a-many to all those seeking adventure and beyond.

Excellent article Ken! I love your well thought out and very interesting
descriptions and wide choices of many awesome races and trails. Thanks so much for sharing.

BTW, I can’t wait for the Tappan Zee bridge shared bike path to open, hopefully in 2018, and run the loop via Long Path and OCA/South County trails. Start at the GWB in NJ on the Long Path and finish in Van Cortland Park. That could be a nice ultra race;)

And the brand new Ultra on Staten Island! ultrasignup.com/register.aspx?did=56380