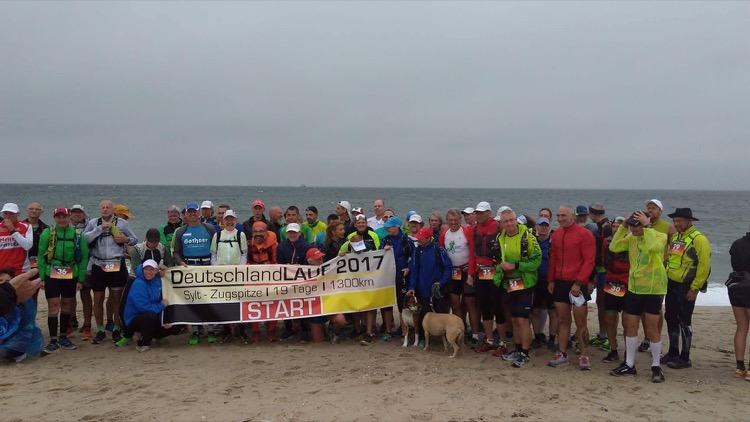 Last fall I stumbled upon a stage race called Deutschlandlauf (translation = Germany Run). The race travels the length of Germany from north to south in a giant, S-shaped route, starting at sea level on the German island of Sylt, at the Danish border, and ending at the highest point in Germany on the Austrian border. Or put another way, 820 miles over 19 days. Perfect! I immediately signed up, as did 59 other runners, mostly Germans but with a few French, Dutch, and Austrian runners in the mix. I was the only North American. In addition to the solo runners (55 men and 5 women), there were two tandem teams in which each runner ran every other day, and one 75-year-old man who pushed a kick bike the entire way.

Nightly accommodations were usually school gyms, with each runner finding a place to throw down his sleeping pad and bag after the day’s work was done. The gyms were nothing fancy but they met our needs, a quality that characterized the race as a whole and allowed the organizers to charge a $1,400 race fee, which included all food and lodging. The day’s schedule was equally stripped down. The gym lights would turn on at 4:15 a.m., signaling us to pack up, attend to personal care, get dressed, and eat some breakfast. The countdown for each day’s start was always at 6 a.m. The race volunteers would transport our personal belongings to that night’s location so we were able to run with just a waist pack or vest. Then off we would run, following neon pink chalk marks, with aid stations approximately every hour or two. 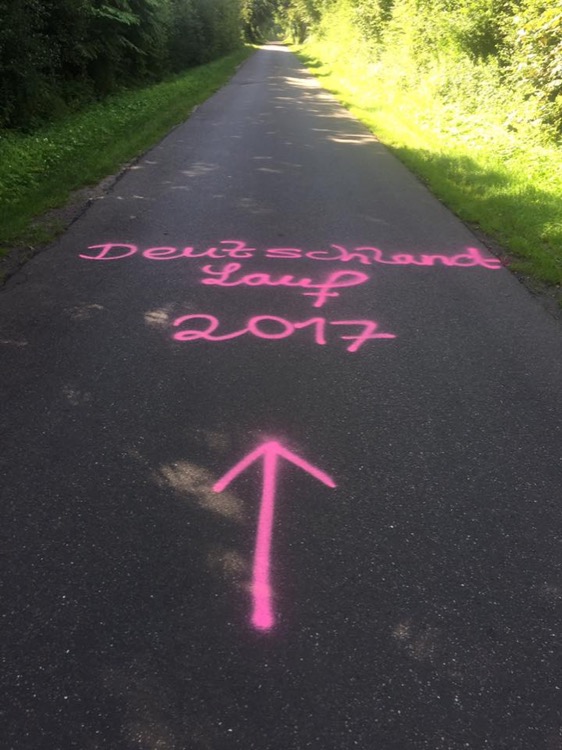 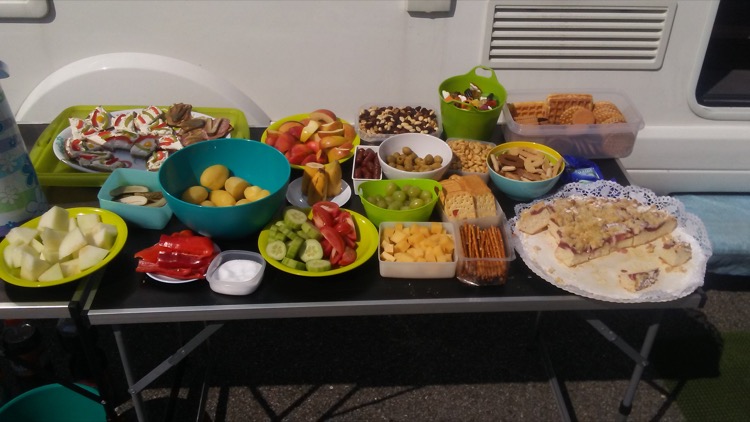 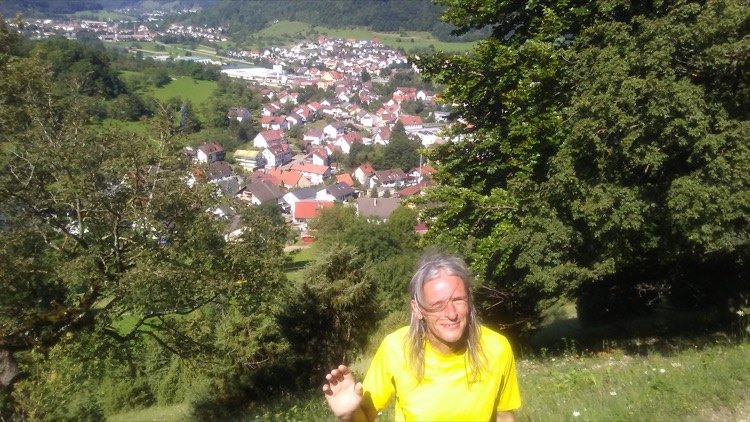 Runner on a trail above village

We spent most of our days running through rural Germany (forests and farms), but a few times a day we would travel through villages, small towns, or even major cities (Hamburg, Cologne), where the course would deliberately veer through the historical sections and main squares, regardless of whether this was the straightest route. When we finally finished, usually 8-10 hours later (but there were a few 12-13 hour days as well), it was off to the showers, then set up one’s bed, rest, eat, and to sleep by 9:30 p.m. Average daily mileage was 43 miles, but there was considerable variability with a low of 34 miles and a high of 54 miles, depending on the terrain and location of towns.

Unlike regular ultras, this event was not just about who could run the fastest, but who could also recover the fastest and avoid injury. I saw speedy, fit runners break down with repetitive stress injuries who then spent days in speed-walking mode. I saw other runners rein themselves in during the first half and who then ran strong in the second half, moving up many places in the results. Everyone took rest and recovery very seriously. The gyms assumed the appearance (and smell) of a military field hospital as runners would sprawl on the floor and tend to their physical ailments, with damp laundry drying on every available surface.

Report author Alex Swenson at finish of a day’s stage

In the northern part of Germany we ran through long, flat sections on straight roads and bike paths. There were vistas of corn and wheat fields, wind turbines, and forests – and always the big, big sky. There was a stretch in the middle of the race where it poured for five days straight, where each day the skies opened up within minutes of starting that day’s stage. It was not the soft drizzle that I am used to as a Pacific Northwest runner. No, these were deluges with the force and thrust of a powerful Midwestern storm, sometimes including thunder and lightning. This was followed by multiple squalls hitting us throughout the day, ensuring that we ran in sopping-wet shoes and socks all day. Such conditions are problematic for anyone running an ultra, but even tougher when trying to run 19 ultras in as many days.

Eventually we trotted down into the Rhine valley where we followed the river for over 100 miles. This was a picturesque part of the course, traveling through one village after another, each more charming than the next. This is also where we saw our first castle. Castles thereafter seemed to pop up on every other cliff or hill. Here too is where the summer heat kicked in, better to ripen all the grapes that surrounded us in that area, but which made the afternoons a true struggle. We roamed the vineyards for days, traipsing up, down, and across on all manner of obscure farmer paths that somehow led us toward our daily destination. 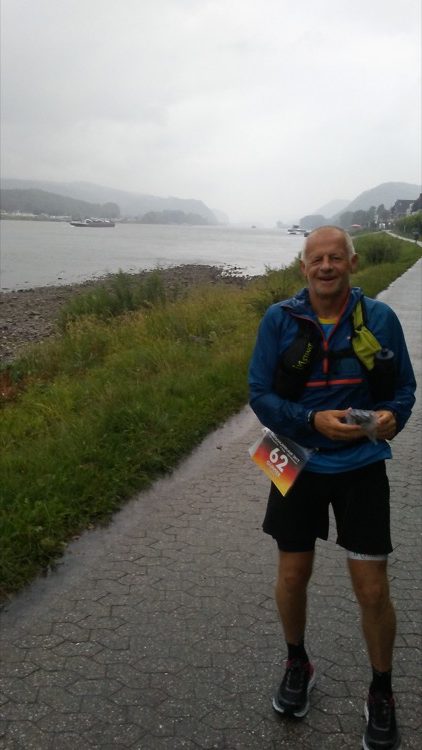 German runner along the Rhine path 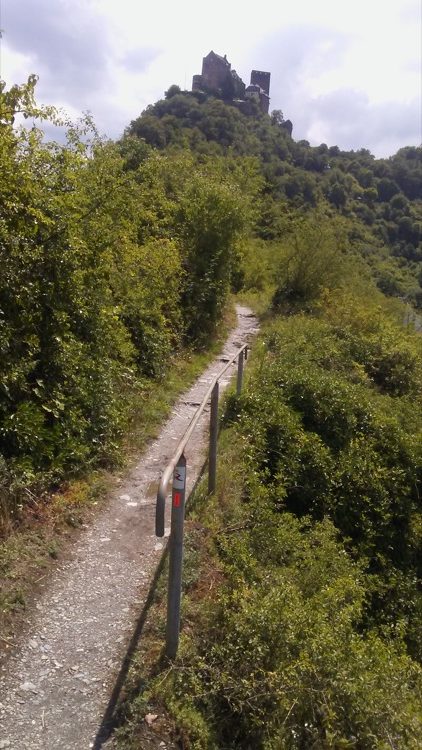 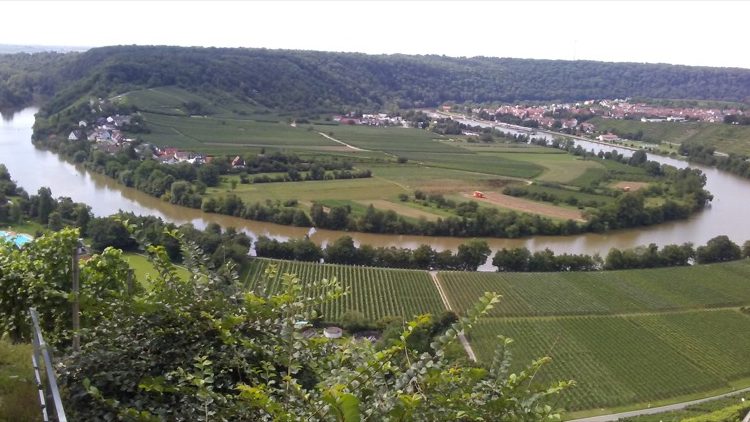 High in the vineyards

The overall course was not designed as the shortest route from north to south, but rather was deliberately laid out to be as scenic and runner friendly as possible. Each day’s route would usually take us over a variety of surfaces, including paved bicycle paths, lonely country roads, dirt roads, cobblestone sidewalks, or trail. European ultrarunners seem to embrace all running surfaces and are not as focused on trails as their American counterparts. Remarkably, we traveled the entire length of Germany and yet only spent about 10 percent of the total distance on roads that had any significant traffic, thanks to the country’s vast network of separated bike and pedestrian paths. 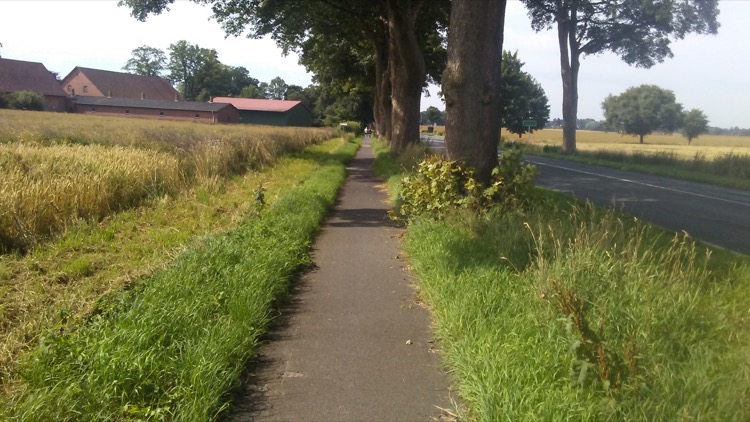 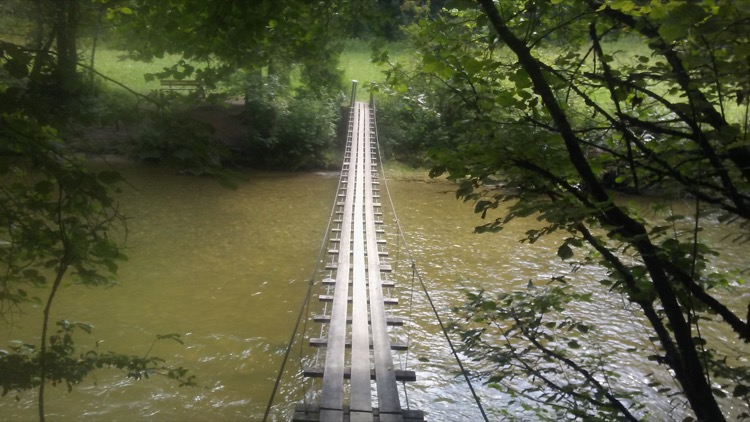 The race director and his large crew of helpers put on a terrific event, thoroughly old school in its understated approach and attention to core needs. There were gyms to sleep in, hot showers every day, a solid breakfast, absolutely terrific aid stations, and a hot evening meal. If a runner needed more than what was offered, the runner supplied it himself. Extras like online tracking or therapeutic services were not offered. By focusing on core needs, the RD managed to nail all the important components and avoid any major snafus, which is remarkable since this was the first time he had directed a stage run, let alone a run that lasted 19 days.

Though a few runners at the front were engaged in competition, most of us were focused on just making it to the end while performing as well as possible. This created a tremendously supportive community where all participants, runners and staff alike, rooted for everyone else and showed genuine concern for anyone experiencing problems. Over the course of three weeks, we became a tight, insular community that felt distinct from the places we were traveling through.

The last few days were spent running through Bavaria, which were strikingly scenic runs. Here the vineyards and wheat fields were replaced by rolling pastures and herds of cows with clinking bells. A few days before the finish, there was a moment when we crested a hill and were rewarded with our first view of the Bavarian Alps, with the mountains gradually getting bigger as we approached them that day. Everyone’s excitement and anticipation ramped up, but curiously it did not make running any easier. 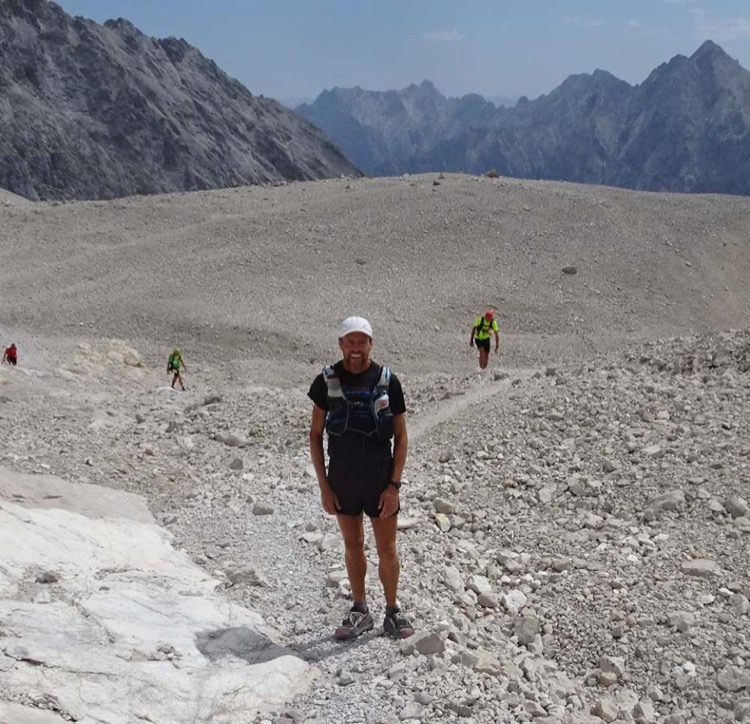 Alex almost at the top

The last few stages turned out to be some of the hardest of the race, especially the final day when we climbed 7500 feet in a single push to the top of the Zugspitze. The Zugspitze, at just under 10,000 feet high, is the highest point in all of Germany and straddles the border with Austria. The last few thousand feet are almost straight up, alternating between scree scrambling and climbing across narrow ledges while gripping tight to metal cables. The reward is a magnificent summit view that encompasses dozens of peaks stretching to the horizon in a full 360 degree arc. Even sharing the views with hundreds of tourists who had traveled to the top by cable car did not diminish the extraordinary feeling of accomplishment that comes from having run across an entire country. Thankfully we were able to take the cable car back down to town.

What began with 60 runners, ended with 40. Of those who didn’t complete the full race, some had significant injuries and went home, while others took a few rest days and then jumped back in for the remaining stages. I finished 13th overall with a total time of jusy shy of 172 hours, a satisfyingly solid performance for someone who had never done a stage race. I struggled on many days, not so much from fatigue or lack of motivation, but from a variety of physical ailments that made running tough. Though as hard it was on some days, I never doubted my ability to finish the race. Besides the usual juggling of terrain and nutrition and weather, I had to push myself every day to be the fastest that I could be while also keeping enough in reserve to perform well the following day, a calculation that I certainly did not always get right. However, after 25 years of running ultras, it was exciting to participate in an event that made me feel like a newbie again.

The next edition of this race will occur in August 2019. Use Google Translate to view more info at deutschlandlauf.wordpress.com. Or contact me at [email protected].

Word spreads fast on The Rock, Alex. Thanks for the great report and congratulations on an epic journey! Inspiring.