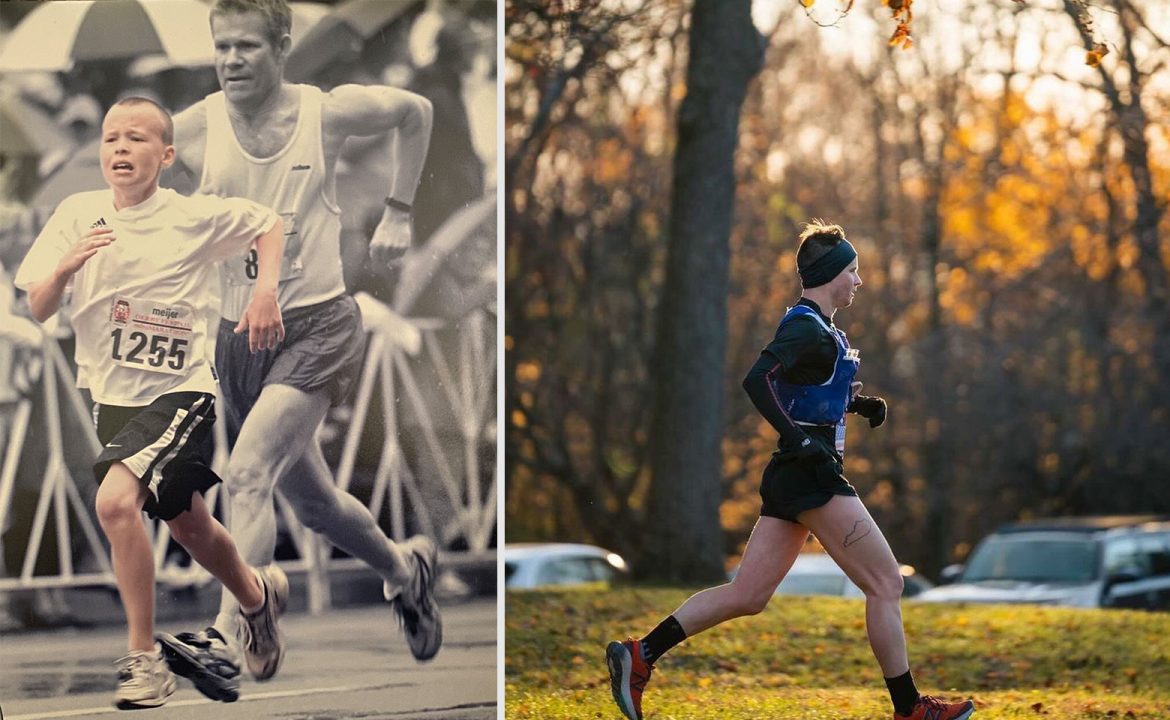 Zack Beavin took his first steps toward becoming an elite ultramarathoner when he was 11 years old—a 4-foot 8-inch, 74-pounder with a buzz cut and boundless energy.

He entered the 2006 Kentucky Derby Festival Mini-Marathon, along with his dad and older brother, blissfully unaware that a 13-mile trek through the streets of his hometown should be a grueling endeavor for somebody so young.

Zack’s mom stationed herself a few miles in from the starting line, hoping to catch a glimpse of him. She couldn’t spot him, figuring he was obscured in the crowd of adults pounding the pavement.

So, she hopped in her car and headed to downtown Louisville, expecting to watch her sixth-grade son navigate the closing stretch of the race.

But again, no luck.

A few minutes later, her phone rang. It was Zack.

“Where are you?” she asked.

He had no clue what he had done. He was just out there running.

He hasn’t stopped running since.

Over the last 15 years, Beavin has logged more than 46,000 miles on tracks, trails and roads, challenging himself in body and spirit in a sport he dearly loves, eventually establishing himself as one of the nation’s premier ultra athletes.

The week before Thanksgiving, he distinguished himself again, this time in the nation’s oldest ultramarathon — the JFK50 in Washington County, MD.

Beavin has long held the notion that ultras were for him, even when he was running track and cross country for St. Xavier High School and the University of Kentucky.

“My strengths in the sport always tended toward the longer stuff,” he said. “Even the 10k in college was just too short for me. When I got out of college and started running half-marathons, that was a little bit better, but I really don’t have that top-end speed to trickle down.”

Beavin was runner-up in the 2018 Indianapolis Monumental Marathon, and his time of 2:18.26 qualified him for the 2020 Olympic Trials, a bucket-list achievement.

But ultras turned out to be his wheelhouse: he won the first five he entered.

“Running a 50-miler isn’t the issue. Running it fast is the issue.”

Beavin doesn’t leave anything to chance. He is ultra-meticulous in his training, nutrition, hydration and footwear.

Going into the JFK50, for example, he had a spreadsheet breaking down his splits, and what he would eat and drink as he burned through more than 5,000 calories in five hours.

The night before, he even practiced swapping out hydration vests and changing shoes, which he would do after finishing the trail segment of the race.

“If you’re doing this at a high level, you’re taking everything into account,” Beavin said. “To an extent, you can BS your way through a half-marathon, or even a marathon. But if you’re going to run ultras, you’re probably plugged into all this stuff.”

Beavin graduated from UK with a degree in engineering, and after earning his MBA took a job in that field. He lasted all of three days.

“It was a soul-sucking experience,” he said.

Instead, he soon went to work at John’s Run/Walk Shop in Lexington.

Among the perks at John’s were getting high-end running shoes at a discount (or sometimes for free), talking to sales reps in the sport and having a schedule that allowed him time to train.

He recently left John’s for a job at the New Balance headquarters in Boston.

Bevin knows he’s punishing his 5-foot-8, 135-pound body by pushing it to such extremes. The day after the JFK50, his hips and legs hurt so bad he walked like a cowboy with saddle sores.

A few days later, he was running again.

Even though he’s relatively new to ultramarathons, Beavin is self-assured in the way he prepares for them.

“The older and more confident I’ve gotten in my running, it’s become less about ‘How do I feel today?’ and more that my body is a machine that has inputs and outputs. If I have the right inputs and the right mindset, more often than not I know what to expect of myself.”

Despite his success in ultras, Beavin feels under-appreciated and undervalued by sponsors.

“Part of it’s my fault, not running the right races,” he said. “A lot of the ultra world is niche enough that there are established big-name events that if you win those, that puts you on the map. But a lot of those races are out west where the sport kind of lives. It’s not super easy for me to get to those races.

“On the other hand, I see these people that get the attention and the sponsors, and I feel like I’m just as good as some of them. But I guess they market themselves right and run the right races.”

Meanwhile, he will keep running, because that’s who he is.

Recalling that first Derby Festival Mini-Marathon, he said he realized that “as an 11-year-old, I had no business running that far that fast.”

At 27, Zack Beavin is running farther and faster than he ever imagined.

Thought Andy Jones’ CR at the “Jim” would never fall! This is one talented runner. Hope we see more!

This guy is an amazing coach as well. Understands all levels of fitness and running goals. What makes him unique in my eyes is his ability to understand where regular folks are in their development and relate incredibly well despite his unique abilities. He’s helped me a ton. Proud to see him get a write-up like this!

Keep I up Zach….you will get noticed
It is exciting to follow your career from Kentucky!