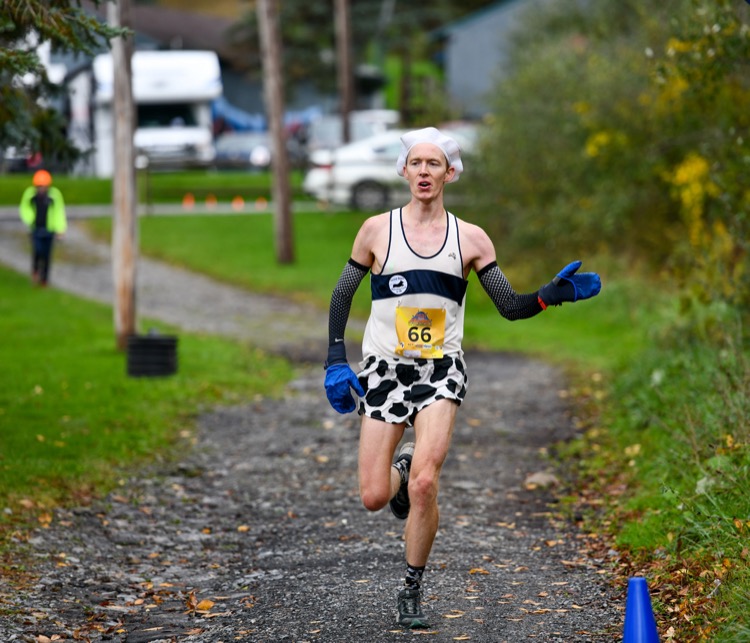 Wacky weather greeted runners on race day with light rain dampening the early miles on this 50-mile loop. Made up of mostly of unpaved fire roads in central Pennsylvania’s Rothrock State Forest, the course received a few rays of sunlight after the rain subsided in the afternoon.

Charles Remillard’s first foray at the Tussey Mountainback was also his official entry into ultramarathon racing. An Olympic Trials marathoner who had also run the Colorado Trail in 10 days, Denver’s Remillard had just come off an intense training cycle for the marathon. He ran the first half of the race with Tim Mateer. “We hadn’t seen each other in over two years,” said Remillard, “so it was great to catch up.”

Remillard kept a 7-minute pace, and he and Mateer had a 10-minute lead at mile 20, just before the course’s 3.5-mile climb. “The constant ups and downs in elevation on the course really beat up my legs. I had to walk a good portion of the last uphill (near mile 45) and I knew I could run the downhills, but I also knew that they were really going to hurt. However, at that point I wanted to win so I knew I was just going to need to suck up the pain on the downhills.” Post-race perspective has great powers, “I initially thought I had no desire to ever do a 50-mile race again, however, I am once again intrigued.”

Having won the ultramarathon race last year, women’s winner Miquela Ingalls knew the lay of the land, but the early rain didn’t help. “Because of being cold and wet, my quads didn’t warm up by the time I reached the top of Laurel Run, and my cold quads really took a beating on the 7-mile descent to Colyer Lake. By the time I was climbing Broad Mountain I thought I may have actually strained my left quad and was worried I’d DNF. Every step on an incline or decline (so, most of the course) felt like a stabbing pain in my left quad and made fast descents impossible.” Ingalls took some ibuprofen at about mile 28 “and this made a world of difference. The cold rain was unfortunate and probably took a toll on all of us in different ways, but it’s just part of the game.”

Second overall and first place military, Carl Hill, a midshipman with Penn State’s Naval ROTC, had run the 2020 race and was clear about the difference racing with others makes. “I ran the first several miles with my friend, Ian Adams. Running that first climb with a friend was outstanding, as Ian (and Laurel Run Road) shook out all of the pre-race jitters with jokes and smiles.”

During the first 11 miles on Laurel Run Road, Hill met seasoned Mountainback ultramarathoner Mike Renz. “I changed my race strategy after he gave me invaluable advice. He recommended for me to walk the steepest parts of the climbs, which saved my legs in the later miles.” Around the course’s 3.5-mile climb near mile 20, Hill met Nick Bodner, a general contractor retired from the Army who also was doing his second Mountainback. “Nick told me some good stories about his time in the service. We shared some good laughs and established a strong atmosphere for the rest of the run.” 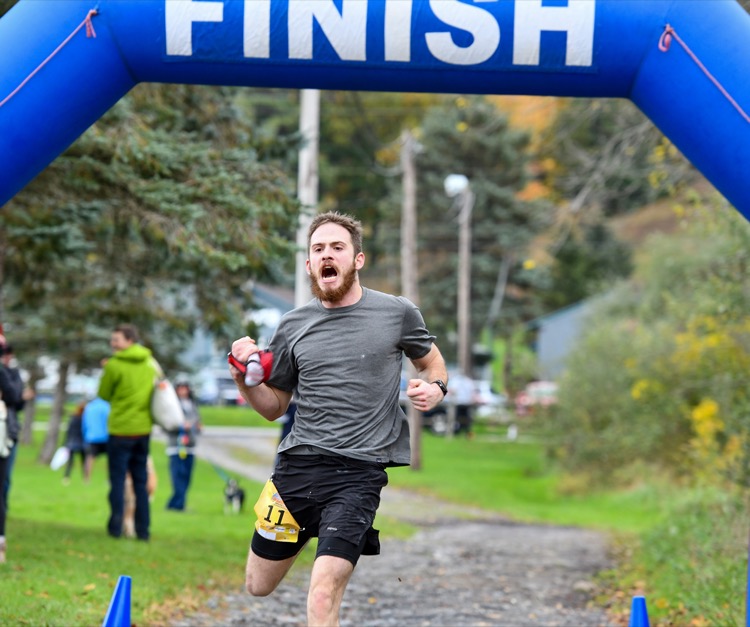 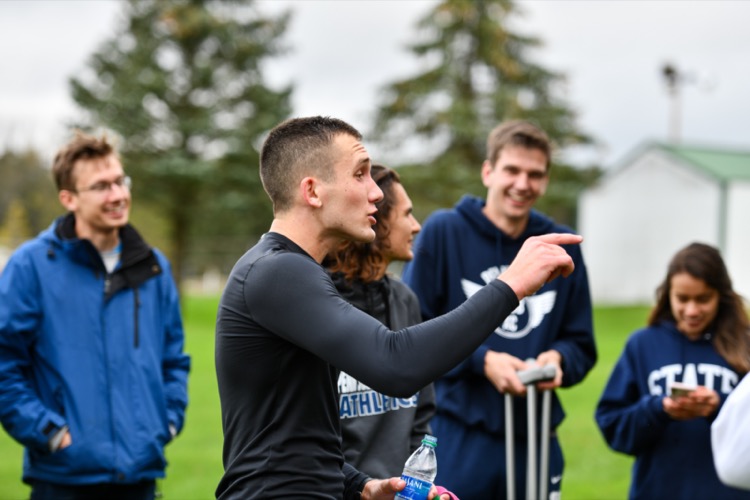 Hill was ecstatic about the support on the course. “I am very appreciative of the volunteers who helped me refill my water bottle and gave me all the needed encouragement at every single aid station. Their work is not glamorous, taking care of my wrappers and trash in cold rain. Yet, the race would be impossible without the volunteers. Additionally, the race would have been impossible without my friends. They were at every station and were the reason why the race was so enjoyable.” 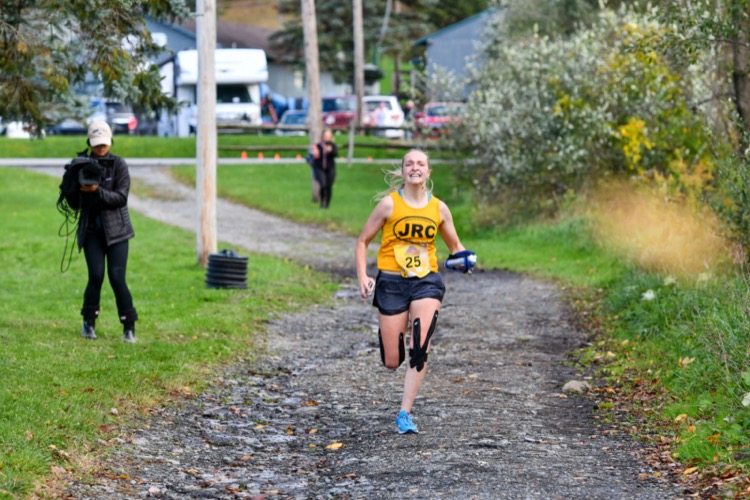 Sixteen-year-old soccer player Kaylee Frederick not only ran a strong race – this was a return tour of the 50-mile course after her first go-round last year, a time she eclipsed by 44 minutes. “I knew I was doing well when I got to leg 6 (mile 20) and felt immensely better than I did last year. Leg 6 was the biggest challenge for me, but this year I thought I knocked it out of the park. The hardest leg for me this year was the shortest leg, leg 9. I just started to struggle a little, but still felt good. And when I got to the aid station at mile 35, I knew I could get a sub-9. I had about 3 hours to do 15 miles and I knew the last four would fly by.” Frederick sprinted the last 100 meters last year, and this year turned on those jets again. “I feel like I went even faster than last year. Something about my brain shuts off all pain when I see the finish line and makes me go as fast as possible, even though just moments before I was in pain.” 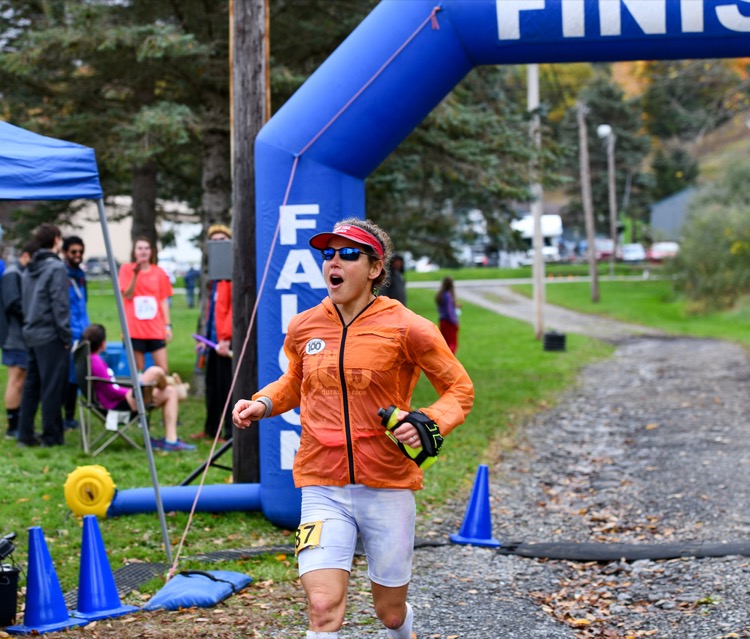 The COVID-19 pandemic has left many people with long-haul challenges, including some runners. Kathleen Cusick, who has run the Mountainback 10 times, is one and she persevered. “I have had health challenges since April that are still a mystery, but my doctors are now thinking it is the long haul (COVID). This is the first race I had done in months, as I literally have to take it day by day. I could not run much at all over the summer, and my legs and lungs still struggle. However, I love Tussey and was prepared to walk the entire thing if necessary. Luckily, this was not the case. The race unfolded well for me; I focused especially hard on keeping my posture up and my lungs open. I swim and do a lot of pushups, but my back was still sore the next day. I did not look at my watch once during the race and was pleasantly surprised when I crossed the finish line to see my time, while far from my best, was also far from my worst. I love this course and took immense pleasure in being able to experience it all again. Running and races were once something I took for granted and with the health challenges, I have learned to be happy and grateful for whatever I can do.”

The ultramarathon is accompanied by a relay event, which brings bursts of cheering for the ultramarathoners on the course as well as awe and inspiration to the relay runners. In his 15th consecutive year at it, 101-years-young George Etzweiler captained the Old Men of the Mountains team of stalwart seniors (seven men and one woman, average age 78), who negotiated the rollicking 50 miles with smiles and grace. Etzweiler’s relay leg, dubbed “The Breeze,” is not a walk in the park but a 3.4-mile jaunt from Gettis Ridge Road to Alan Seeger Natural Area. “I was still standing at the end,” said Etzweiler with a broad smile.

Etzweiler, 101, was still finishing Mt Washington Climb as of a couple years ago!

Congrats to George Etzweiler (101), my Engineering Drawing instructor in my freshman year at Penn State in 1955! He was 35 at the time, working on his PhD. Who said engineers can’t run?