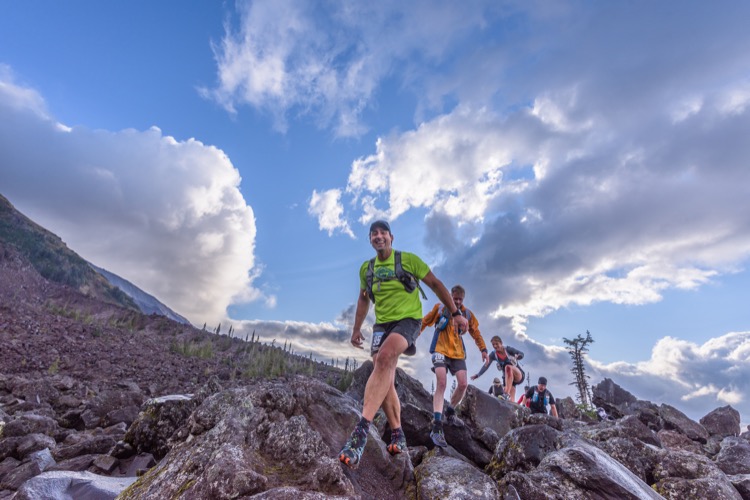 Volcanic 50: Year of the Fast Runners, and the Hornets

There are two things that will be remembered about the 2015 Volcanic 50. The hornets and the speed.

About half of the racers had the unfortunate experience of getting stung by bees. The race directors alerted the runners to known bees near the 28-mile mark during the pre-race announcements, but runners got to interact with bees much earlier on, less than six miles into this ultra.

Even those these hornets or wasps or tracker jackets or whatever the heck they were, caused distress to some runners, the lead racers didn’t let these bees bother them and hustled on to set new course records. This was an unusual year for the bees, normally they don’t cause many problems.

Take a look at the course record times and you’ll see a lot of 2015 times on the leaderboard. That was the other standout about this race. Six of the top 10 fastest men’s times were recorded this year, including a new course record set by Rod Bien by 32 minutes. The women’s field was equally strong, with eight establishing new race records, and Susan Barrow setting a new mark by 30 minutes. View Full Results.

This race circumnavigates an active volcano, the only of its kind around. Mt. St. Helen’s erupted in 1980 and caused massive destruction to the majority of the mountain. Runners get to experience some dense old growth forest that survived the eruption, as well as the moon-like landscape in the blast zone. Are we are on Mars? This technical course involves a lot of boulder fields, which challenges runners several times throughout the race, but add to the epic beauty of the course.

Many racers camped out (for free) before the race, making for a festive atmosphere in the Marble Mountain Snow Park the night before and morning of the race. After a quick mandatory gear check, bib pickup and race announcements, the runners were off for an epic adventure that challenged many beyond anything they had experienced before.

Here are a few comments from the racers:

“A truly amazing event. It totally exceeded my expectations. Course markings were probably the best I’ve seen. Aid stations were full and loaded with happy, eager volunteers. My hat’s off to you guys…you truly know how to host a world class event.”

“This was the toughest race I’ve ever and when I walked off the finish line, I swore I’d never do it again. All I can think about now is how much fun I had clambering around that mountain … I was really charged up by the big welcome at the finish as well even though I finished nearly 5 hours after the top guy. It makes me appreciate how there are events out there that are truly for all kinds of runners, both competitive as well as for those of us who just want to tackle the challenge of covering this distance in this kind of trail. Overall, another great event.”