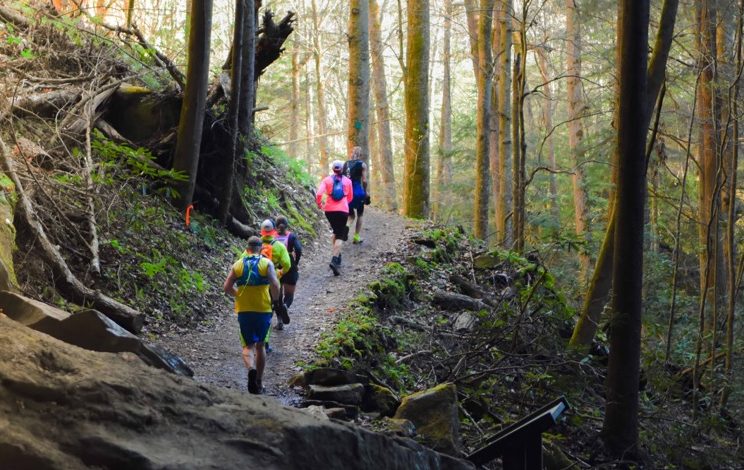 Unique and beautiful, the Yamacraw 50K in Stearns, Kentucky on April 8 grabbed runners’ attention and held it from the very first steps.

Runners were immediately immersed in an abundance of natural beauty as they set off at 7:30 a.m. Towering rock walls and overhangs, 113-foot Yahoo Falls, at least a dozen water crossings, blooming wildflowers and the Yamacraw River were highlights of this third-annual race, which sold out in days.

Runners reached the finish line by crossing the length of the Blue Heron Bridge, high above the Yamacraw River.

“Coming into the finish over the 100-foot-high pedestrian bridge is definitely the coolest finish I have ever had,” first-place female finisher Traci Falbo said. 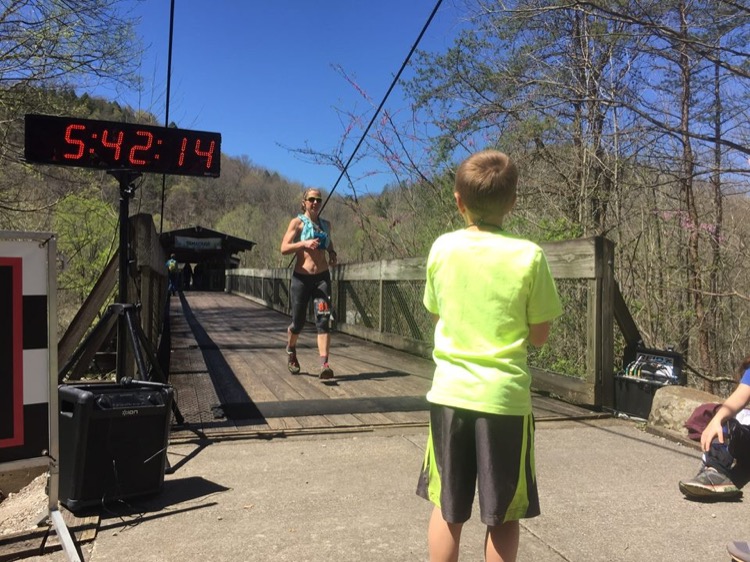 A cheering crowd and the race director himself greeted each finisher after 33 miles of challenging yet very runnable terrain. The race is point-to-point and nearly all singletrack, with about 4,000 feet of elevation gain. Weather for race day was nearly perfect, starting in the upper 30s with sunshine and warming up quickly.

The course runs through Daniel Boone National Forest in Eastern Kentucky, a designated wilderness area known for its natural arches, wetlands and waterfalls.

It’s hard to describe running behind Yahoo Falls. The large rock shelter felt a bit cavern-like and was hard to take in all at once.

“I’ve run 140-plus marathons and ultras. This is my favorite race photo ever,” Falbo said of the photographer’s shot of her emerging from behind the falls. She added that Yamacraw, which she found while searching for races on UltraSignup and ran for the first time this year, is now her favorite trail race.

“My favorite part of the course was the lollipop loop where we ran under the rock ledge with Yahoo Falls cascading down from above. I was in awe and disappointed I didn’t have my phone to take a picture until I saw a photographer taking pictures,” she said. “The rock walls, as big as buildings, had green moss growing all over them, adding to the lushness and awe of the course.” 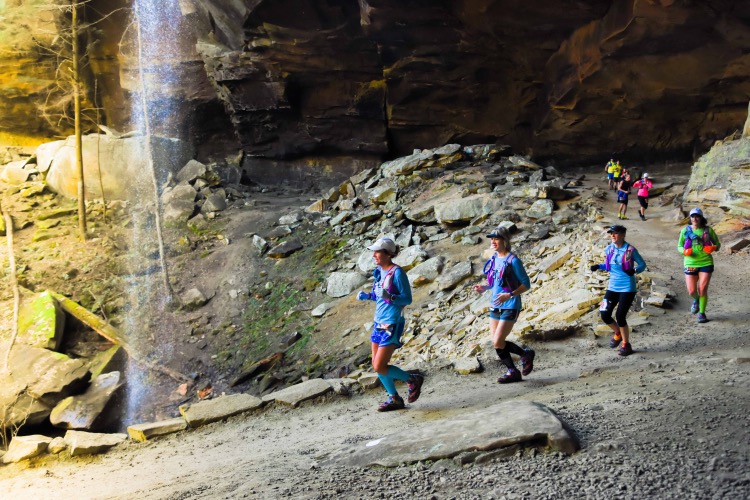 “I found out my iron was low at the end of February, and I was just starting to feel better most days. So my goal was to run by feel, have fun, and not worry about my place. I did just that. An added bonus was moving up from third to first about 15 miles into the race and holding steady. I hiked most of the climbs because I still felt tired/dead on the climbs. I ran where I could on the downs and the flats. I was elated to finish well and enjoy the most beautiful trail race.”

The first-place male finisher was Tim Hill of Knoxville, Tennessee in 4:41:49. Falbo, of Charlestown, Indiana, finished in 5:42:10 and 10th place overall.

Finishers were rewarded with unique trophies and wooden medals, and an after-party with a buffet and live band.