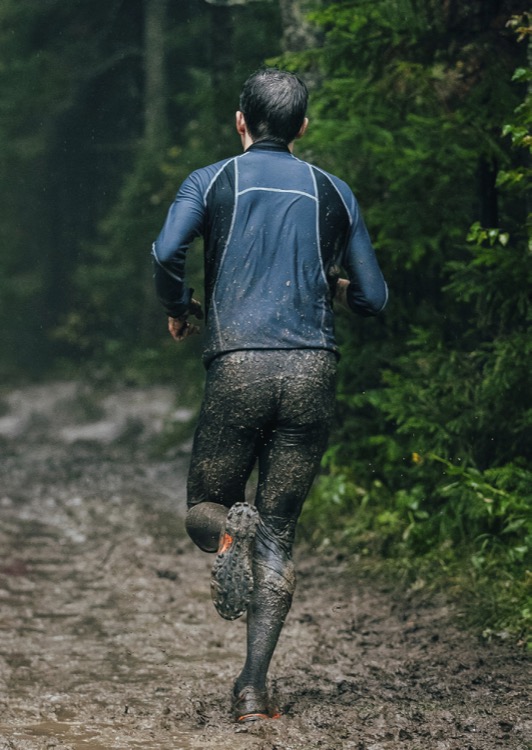 I almost did not go.

No one watches the long-range weather forecast like an ultrarunner. Whether we are planning some long training run or preparing for an event, nothing weighs as heavily on us as the forecast. Of course, it really makes little difference if we are headed to a race. Having invested our children’s inheritance in the entry fee, we’re going to go no matter the weather.

My planned outing was different. We had lined up nothing more than a couple of days out on my favorite mountain trails. Nothing was invested until we started the long drive out. The initial forecast offered little to encourage the trip: two days of rain. The mental image of spending two days in the woods, shivering and soaked to the bone (with macerated feet) held little appeal.

We ended up waiting to fully commit to the trip until the evening before we were to leave. The forecast was less than perfect. Rain was supposed to start on Saturday afternoon, and continue through Sunday morning. Then a front would sweep in, with high winds and bitter cold. After much consideration, we decided we would be able to work around the conditions… besides, the forecast is never a guarantee.

Saturday just turned out to be a good day in the woods. It was overcast when we started, but we soon forgot all about the impending rain. Our minds were occupied with exploring the game trails as we made our way up and down the steep ridges. The highlight of the day was stumbling across a beautiful waterfall in a previously unexplored valley. The first drops of rain did not begin to fall until we were back at our cars, preparing to head to town for a big buffet dinner.

It became a good rain all night Saturday, but we were encouraged to see that the precipitation termination had been moved up on the forecast. The rain should be ending before we got started with Sunday’s big hike. On the other hand, we could expect high winds to bring in plummeting temperatures. Our planned route would put us along a lot of high, exposed ridgeline. It did not promise to be an easy or (possibly) even enjoyable day, but we were already there. We bundled up in our warmest clothes, and headed out.

Contrary to the forecast, instead of being bathed in sunshine, the mountaintops were obscured by dark clouds. As we strapped on our packs and headed out, it was at least encouraging that we were not faced with rain. It can’t rain when it’s 20 degrees. The light falling snow was actually something of a plus.

I was not surprised to discover that my legs were a bit stiff and sore from the previous day’s effort. However, that was soon forgotten in the rare opportunity to walk in the falling snow. Climbing the south side of the mountain, we were protected from the winds that were howling up top, so we could steadily ascend as the snow fell around us. The temperature turned out to be nearly perfect. The effort of climbing produced plenty of body heat, but it was just cold enough to prevent getting soaked in sweat.

As we climbed up into the clouds, we came across ice fog. Ice fog, more properly called freezing fog or hoar frost, is one of the most beautiful phenomena in nature. The water molecules are cold enough to freeze, but remain liquid until they touch something. As the wind drives the fog through the forest, the ice accumulates along the windward side of every branch and twig creating a shimmering, white, crystalline forest. In the muted light inside the clouds, the whole place took on a surreal appearance.

We expected the howling winds coming over the top of the mountain from the north side to turn the rest of the day into a bitterly cold ordeal. But while we were climbing, the front seemed to have passed through, and left behind it a spectacular forest of ice. The high ridges were as calm as I have ever seen them.

The ground had been warm, but now was crusting over with ice, making for excellent footing, neither rock hard, nor muddy. Shortly after we topped the mountain, we left the manicured footpath and traveled on game trails. Normally, it takes a trained eye to make out the compressed leaf litter of the trails. However, today the falling snow had covered over the loose litter, but melted where the trails were compressed. The trails we wanted to follow lay out like highways through the snow. I alternated between admiring the intricate ice crystals up close and drinking in the magnificence of the scenery. The day passed all too quickly.

Our cars were still the only ones in the parking lot when we returned. I suppose the forecast had discouraged those who lived close by. The entire park had belonged to us all day. We talked for a short while about how perfect the weather had been all weekend, but once we stopped moving, the cold soon penetrated our clothing, and we were ready to get in our cars. It had been another of those special days we are so lucky to enjoy…

And I almost did not go.

I love this article! I am a meteorologist by profession. So many times, I have talked myself out of a daily run with the weather excuse. I mean how would it sound? The headlines would read, “meteorologist struck by lightning while out on a run.” And then the backlash, “that’s what she gets!” Or worse, “if the meteorologist goes then the storm must not be that bad.” Internal battles, really. But, I managed to gather the courage to run Cactus Rose in 2015 during tropical storm force winds and rain…literally, Hurricane Joaquin moved through Mexico and was still going as it crossed into Texas, and as nature would have it, right over Bandera. Flash flooding, river flooding, wind howling, sky falling. What are the odds?? Well, pretty high if you pay for an epic race, train for months, then have to travel to the event and spend the night in your car. It is what it is. People ask ALL THE TIME, “What’s the weather going to be like.” I could give the worst news possible or I could say, “Just go with it.” Until lightning strikes your head or toes fall off from hypothermia, have fun and Just Go With It!!! (see what I mean? internal battles)