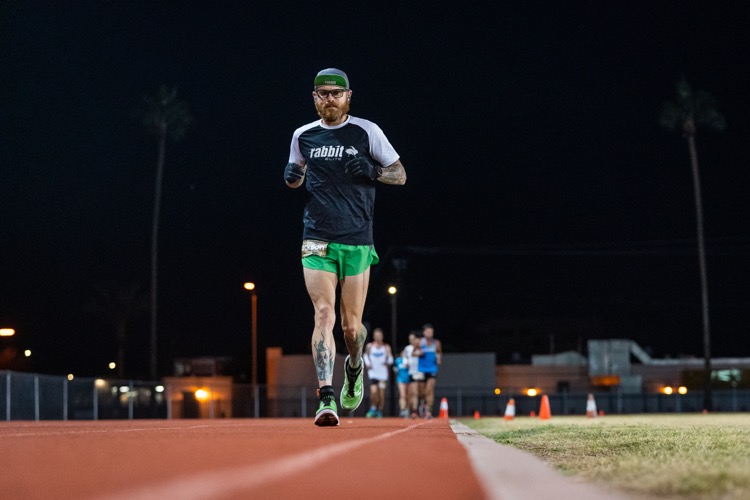 While many runners have shut it down as winter rolls in across the country, the trend of going long is somehow still ramping up as we inch closer to the New Year and the 2022 UltraRunning racing Calendar.

We head south, this time to Arizona and Desert Solstice in Phoenix, for a 100-mile and 24-hour race. This track event at Central High School is no stranger to records, competitive head-to-head battles and blazing-fast times. The 2021 edition is kicking off on Saturday, December 11, and will again serve as a qualifier for the USA 24-hour national team for those hoping to compete at the 2022 IAU 24 Hour World Championship.

The women’s and men’s fields are so completely stacked we don’t even know where to begin our preview. Fresh off their wins at Javelina Jundred just over a month ago, Camille Herron and Arlen Glick are both in the 24-hour race. Glick has won an astounding four 100-mile races (Umstead, Mohican and Burning River being the other three) this year, and Herron broke the JJ100 course record by nearly an hour.

Not to be overlooked on the women’s side are Sabrina Little (2019 Project Carbon X 100k Champion), Pam Smith (fourth at the 2019 IAU 24-Hour World Championships in Albi, France) and Marisa Lizak (the Six Days in the Dome 48-hour Champion), to name a few.

Nick Coury (fourth at the 2021 Run Rabbit Run) looks to continue his tremendous year, David Laney (fourth at the 2021 Canyons 100K) is known more for his mountain pursuits but can’t be underestimated, and Jacob Jackson secured second at the 100-mile USATF Championships at the Jackpot Ultra Running Festival this past April. Aravaipa Running will again be livestreaming this event, so be sure to check it out.

In Lore City, Ohio, the Bigfoot 50k is a chance to run a three-loop, relatively shorter ultra compared to what the aforementioned runners are taking on in Arizona. The race takes place on rolling hills entirely within Salt Fork State Park, the largest state park in Ohio at nearly 20,000 acres.

The Hellgate 100k is a northeast classic in Fincastle, Virginia, entering its 18th year. Held in the Blue Ridge Mountains, the point-to-point course reportedly gives you a few extra bonus miles and a burly 13,000 feet of ascent. Many runners note that racing Hellgate feels just as tough as some 100-milers. The weather forecast is calling for a wet one too, perhaps making it even more challenging.

Across the coast in the Marin Headlands we have the Rodeo Beach 50k offering spectacular vistas of San Francisco, the Pacific Ocean and of course, Mount Tamalpais. Plenty of vertical gain and loss with this multiple-loop course starting and ending at the beach. Quintessential California in December.

Naturally, these aren’t the only races happening this weekend. In Vermont we have the Krampuslauf 50K; Oak Harbor, Washington, is hosting the 10th Deception Pass 50k; Golden, Colorado, has the Sawmill 50k, and in Montgomery Bell State Park in Burns, Tennessee, we’ve got the Bell Ringer 50k, all on Saturday morning. Our lone Sunday, December 12 event is aptly in the Lone Star State—the Dallas 50k run in downtown Dallas. Flat and very fast all on paved roads.

What’s Up in Ultra in your neighborhood this weekend that we should know about? Drop a note in the comments below, let us know what we missed, and what’s lighting your winter ultra fire.

Normally, tech can be a mixed blessing with something as visceral as ultras. But we watch these livestreams like Desert Solstice via youtube on our TV (when available), tracking simultaneously on the phone to match names and faces, if we don’t already know them. It’s very intimate with old friends, but we also try to do our best ESPN-style commentary with the younger ones.

Aravaipa does a great job, looking forward to following along myself!

Yes, they’ve continued to upgrade the statistical analysis. So far lots of runners have a chance. Well done, Aravaipa.