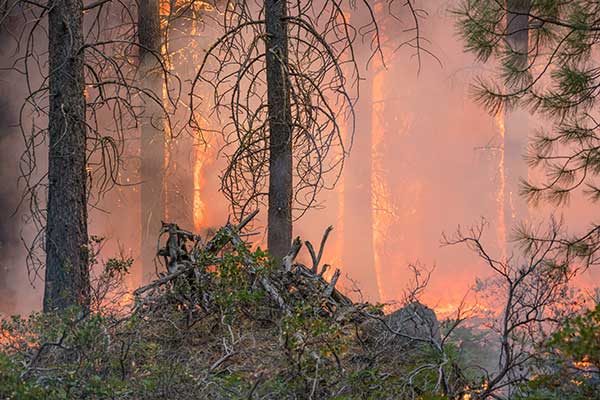 What Happens After Wildfires

I sit here writing as three of my favorite trail systems across Oregon are being devastated by wildfire. As a former wildland firefighter, I understand that what may seem like a catastrophe can actually benefit an ecosystem. But as a trail runner, I continue to struggle with the fact that the lush trails full of thick vegetation and old growth trees are being scorched and burned away. So what does the future hold? Will I recognize the trails of the 100K I ran just last spring? What will my good friend and race director of the Peterson Ridge Rumble find when he returns to the race course in Sisters, Oregon next year? Has the green moss and lush fir been burned from McKenzie River Trail? Only time will tell.

While wildfire’s effects may be long-lasting, there are benefits. The U.S. Forest Service states, “Wildfire is a part of nature. It plays a key role in shaping ecosystems by serving as an agent of renewal and change.” Here is an example of a species that was regulated using controlled burns, “The Oregon white oak is a sun-loving tree. Without fire, conifers increasingly dominate the stand, and oak is eventually shaded out. Prior to Euro-America settlement, American Indians who gathered acorns for food frequently burned Oregon white oak woodlands to favor the tree. This killed the young conifers and led to grassy understories. These low-intensity grass fires often caused only minor canopy damage to oaks. Prescribed fire is once again being used in many Pacific Northwest woodlands to control competition from woody vegetation.”

Those of us in the Pacific Northwest and beyond have felt the impact of extreme weather this year. We were buried under inches of snow through the winter, only to succumb to consistent, high temperatures throughout the summer. With no end in sight, we’re now entering fall months under a smoke-filled haze that has us all worried about our beloved trails, and what we’ll find come late fall after the temperatures have cooled. But right now, with the amount of wildfires burning across the state of Oregon, optimism is hard to come by.

My only experience seeing a landscape both “before-and-after” a wildfire was when I found  my favorite trail had been burned, leaving an area that was previously shaded, and now exposed to the sun. Foliage had been burned away, creating bone-like telephone poles where cool trees covered in pungent pine needles once stood. I was grateful the creeks still babbled and the waterfalls continued to pour into pools. And the trails remained.

With uncertainty at our doorstep, we must look ahead with cautious optimism knowing that with tragedy there will always be hope. Hope that the future brings a better tomorrow, after looking back on devastation. Many races have been canceled this year, and have also been canceled in the past. Forest fires will continue to burn, just like they did back in 1933 when the Tillamook Burn scorched 350,000 acres throughout Oregon. But we can continue to love our trails, and give back to those who make it possible for us to run on them year after year. It’s our time to be strong and stand up for the places we love so dearly.

Cool story, enjoyed the multiple perspectives. As a fire ecologist currently assigned to a wildland fire in northern California (unable to keep up with my running routine while pouring over maps all day in the situation unit), this story was a fun distraction! I can relate to the sense of place, the concern for fire severity and change to the places we love, but also the important natural role fire plays in western ecosystems. There are no simple answers, but informed dialogue is how we get there. Thanks for chiming in.