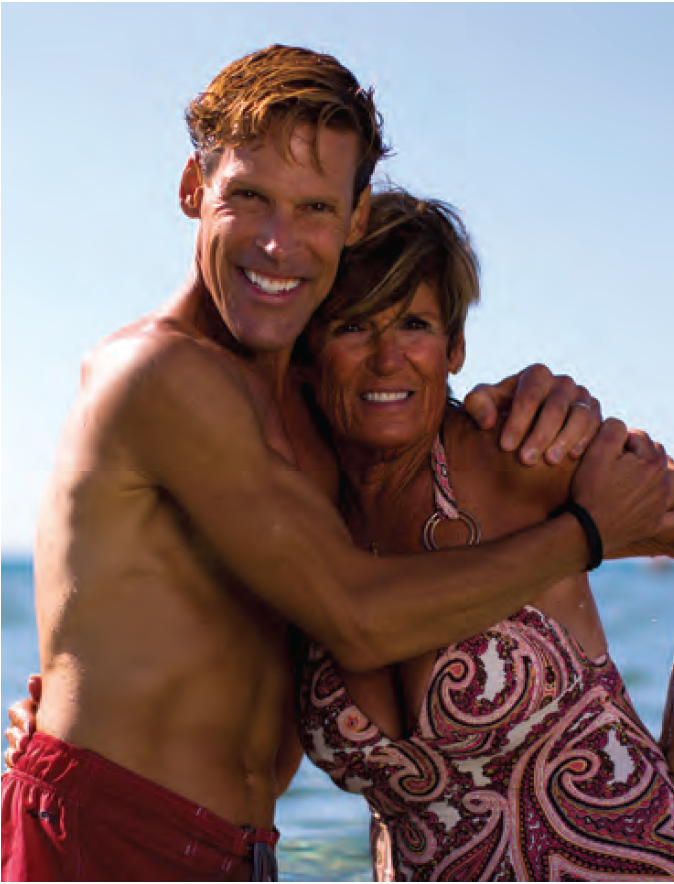 Over the years there have been an increasing number of families attending the Western States Endurance Run. I thought it might be enlightening – and perhaps a bit entertaining – to hear the perspective of a family member, so I solicited the help of dear ol’ mom. What you’re about to read is her take on the inaugural Western States “experience.”

It’s every mother’s curse – we worry. That’s our job. And certainly this time my worry was warranted. My son was going to be running on rockstrewn mountain trails for 100 miles. Would he be dressed warmly enough, too warmly, was he wearing sunscreen and most importantly… what would he eat?

His dad and I were a clueless crew about to enter uncharted territory. Dean was set to run his first Western States 100-Mile Endurance Run tomorrow morning and we had no idea what to expect. As a mother, I worry.

After a sleepless night we watched the morning sendoff from the ski lifts at Squaw Valley. Cheering for the runners was exciting and helped to temporarily blunt my anxiety, but what was going to happen next?

We headed to a place called Robinson Flat and watched as Dean, and the other runners, got weighed in. Why were they doing this? Was he eating enough? He looked skinny. He should eat more.

Sadly, he’d already developed some hulking blister. I couldn’t breathe properly watching the medic tend to his foot, so I turned the other way. I thought this could be it, but when I turned back around, he was gone.

Next we headed for a place called Foresthill School. And waited… and waited. Waiting is murder for a concerned mother. Have I mentioned that we tend to worry? What was happening to my son out there?

Then he emerged along the roadside, dashing toward the checkpoint. He looked amazingly good, strong, the way I’m used to seeing him. But he still looked skinny. “Eat,” I told him. He just laughed and told me to stop worrying.

One comforting element was the surprising warmth and hospitably of the aid station workers and local residents. The mood was festive and the streets were lined with cheering spectators. I was relieved. Then another runner came sauntering in. He looked horrible. He appeared to be hurt and was moaning. My mood suddenly turned somber once again. I worry. This past winter had been an especially wet one and the infamous Rucky Chucky river crossing appeared shockingly treacherous. How was he to cross this raging torrent? There was only one flimsy rope to grab onto. I was certain he’d be swept away. “Mom,” he shouted to me from the water’s edge, “stop worrying!”

Off to Highway 49 we went. We waited for Dean to reappear, hopefully. It seemed to take an inordinate amount of time. Time seems to slow down in such moments. The seconds drag on and the mind is awhirl with implications. He didn’t have a pacer with him, wanting this first 100 miler to be a pure experience of self-reliance and resourcefulness. You can thus imagine our surprise when he came running into the aid station with another runner and his pacer, until we noticed his light out. My son wasn’t that resourceful after all; the batteries in his headlamp had worn out and he hadn’t been carrying spares. He’d run with the others to see the trail.

Even more concerning, however, was how gaunt he looked. We helped him to replace the batteries with some extras he kept in his gear bag, and then asked how he felt. “I’ve never been in a train wreck,” he answered, “but I imagine this is how you feel.”

My heart skipped a beat. “Mom!” he said, “I’m just kidding. You’ve got to stop worrying so much, I’ll be fine.” Though I wasn’t so sure.

My husband went to Robie Point to wait, but I couldn’t bear the drama so stayed at the finish line instead. Apparently Dean was in shambles as he emerged from the trail, though no one would tell me this for years to come, knowing how much I worry.

When Dean came bounding onto the Auburn track it was a supremely glorious sight. He’d risen from the ashes and looked entirely renewed, sprinting at top speed toward the finish with amazing spring in his stride. Finally, after 21 hours of worrying, my soul could rest.

And so ended the emotional roller coaster of the day. There had been many highs, and many lows, as well as plenty of surprising enchantment along the way. Dean was a changed person after that day, and so were we. It had been a transformative experience and I can still remember every second vividly, even after two decades.

Many more silver buckles have followed since that first, and we’ve been there for each and every one. Plenty has evolved at Western States over the years, but one thing remains timeless: no matter how many buckles my son earns, I still worry. As a mother, some things will never change…