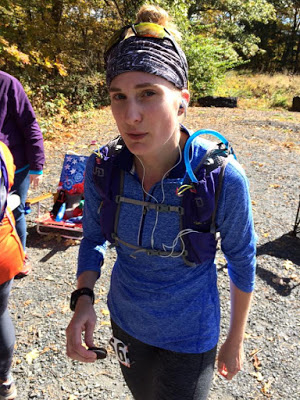 Early Saturday morning, driving down winding roads and rolling hills, my stomach fluttering with nervous anticipation, it felt like being on a roller coaster. But we were not at an amusement park. We were en route to the start of the inaugural Water Gap 50K in the Poconos/Delaware Water Gap region of Pennsylvania. Little did I know that this race would also be quite an emotional roller coaster.

There were six of us in the van I affectionately refer to as Fun Gus: me, Pete, Alison, Bob, Todd and Prem. Three years ago I didn’t know any of these people, but the trails of our hometown (Rochester, NY) brought us together. Now they are some of my closest friends and I am married to one of them. The best things in life can be found on the trails. We had driven to Pennsylvania the Friday before the race and were staying at a sweet HomeAway rental in Dingmans Ferry, PA, complete with a fireplace, hot tub and lofted bedroom. After a dinner of homemade veggie pizzas and a smorgasbord of desserts and laughs, we called it an early night.

Saturday morning we made our way to the race start at the Hialeah Trailhead. The course follows the entire McDade Recreational Trail from Hialeah to Milford Beach, along the Delaware River. The MRT is mostly wide crushed stone/packed gravel trail with a few short sections of technical single track. It was a chilly 38 degrees at the start, but it was sunny and dry, a perfect fall day. The trails were beautiful, especially this time of year with the leaves decked out in full autumn colors. The course played to my strengths in that it was non-technical, fast and flat (there were some rolling hills but the signs warning “Steep Hill” were almost laughable), but also to my weaknesses in that my joints are not particularly tolerant of repetitive pounding on hard surfaces.

The first few miles flew by and I had to keep reminding myself to rein it in and not go out too fast. I was running with Bob and then we caught up to Alison and Todd and I thought there is no way I should be up here running with them. Pete, driver/crew/husband extraordinaire, met up with us at several points along the trail, always seeming to be there at exactly the right time to take the gloves and hats we no longer needed or to give us sunglasses.

When Alison said we were almost at the halfway point, I remember being surprised by how far we had come already and how good I still felt. That would all change, almost immediately. A little after mile 15 my groin muscles started to ache, which was new and weird, and not in a good way. Alison gave me some Arnica and then I fell behind her as the race started to go downhill for me, and not in a good way. The groin pain went away but around mile 17 my left ankle started hurting and the pain worsened with every mile.

I seriously considered quitting the race. Then came the bargaining. I could stop now and call it a training run and then run a local 50K in a few weeks. Then that train of thought devolved into I’m not running another race this year and then further into I’m not running another race ever again. The only race I’ve ever DNFed was 3 years ago, also in the Poconos. So I was hobbling along, haunted by the ghosts of failures past and the mean voice in my head was all Why did you come back to this place? For redemption? You’re not going to find it. You’re not cut out for distance running. You don’t have what it takes. You’re not a good enough runner, friend, life partner, person. You’re not good enough. You’re not enough.

Here I was on this beautiful day in this gorgeous place with these wonderful people and I was going to fail. I just couldn’t do it. I was kind of glad that I hadn’t seen Pete in a while because I knew as soon as I saw him I would burst into tears, climb into the van and curl up into the fetal position. But I didn’t quit. I put in my headphones and kept going. Bob passed me while I was limping along, wrestling with the pain and demons, on the verge of tears. He looked a little concerned and I knew I must have looked as bad as I felt, if not worse. His knees were hurting but he told me he had gotten some ibuprofen at the last aid station and that had taken the edge off so now his legs just felt numb. Luckily the next aid station was just up ahead and some other runner’s mom was there with a whole bottle of ibuprofen. Those 2 little blue capsules saved my race. Bob took off and I was once again by myself, still in pain but now with anti-inflammatory drugs and hope coursing through my veins. I stopped caring at that point. About the stupid Poconos. About what anyone else would think. About my time or even about finishing. I just let it all go and thought, Accept this reality, this pain is only temporary. So you’ve fallen into the pain cave. Better learn how to spelunk your way out of that shit. You are enough. If anything, you’re too much. Too much heart, too much life to be contained in one little body. That’s why you run. Because you can’t not run. You are a f*cking unstoppable force! (The swearing was necessary. Curse words lessen the pain. It’s science.)

Since it hurt just as much whether I was going slow or fast, I decided to pick up the pace and at least get the suffering over with as quickly as possible. Miraculously, I started to feel good again. Never before in a race have I experienced such a drastic 180 degree mental and physical turnaround. I caught back up with Bob and he was as surprised as I was to see me looking so much better. At the last aid station, I saw Pete, who had purposely waited to see us until it was close enough to the end that we wouldn’t be tempted to quit. I hugged Pete, then it was only a little over 5 miles to the finish and it became a race between me and the half-life of ibuprofen.

There was about a two mile section of beautiful leaf-covered single track. Afterwards, we referred to it as the un-runable trail because by that point in the race attempting technical terrain was a Herculean task for our tired legs. But I actually did run most of it, albeit cautiously so I wouldn’t twist an ankle or fall down into the river. My spirits were lifted by a couple of guys out in a canoe who waved and cheered as I went by. The last 3 miles, back on the wide stone trails, seemed to take for.ev.er. At around mile 30.5, The Pretenders “I’ll Stand By You” came on the iPod and I teared up as I took in the beautiful tree covered baby mountains to my left and sunny field to my right. That lyric “Take me into your darkest hour and I’ll never desert you,” it gets me every time, man. I honestly didn’t think I was going to finish this race and it wasn’t until the last half mile that I knew I would. I started sprinting, passed the woman in front of me and then saw Alison up ahead so I gave it everything I had and ended up finishing just behind her.

Prem, Alison, Bob and Todd are fantastic runners and of course all did well. The race director gave us these awesome metal finisher signs. And our group ended up going home with 3 free pies. (Throughout the race, the RD had placed 6 tiny signs with pies on them and if you found one you got a pie at the end). And all’s well that ends in free pie.

After the race, we went back to the cabin and eased our tired bodies into the hot tub for some sweet relief. I highly recommend post-race hot-tubbing. I do not recommend post-race falling down the stairs in the dark while trying to get from the loft bedroom to the bathroom of your rental house. But I did both.

I liked the laid-back, minimalist feel of this race and the MRT is a gorgeous trail. Also, the lure of free pie is strong. Water Gap 50K was another excellent adventure with some of my most favorite people. And for that I am grateful. Thank you to Red Newt Racing and all the volunteers for a wonderful event. Thank you to Alison, Bob, Todd and Prem for being the best people/adventure friends and especially to Pete for being the best adventure/life partner.

When people ask why I run, I can never seem to find the right words to adequately explain it. To explain the feeling of a weekend like this one, all the lows and highs and pain and awesomeness. To explain how you can feel like you never want to run again and then 10 minutes later be contemplating your next race and the race after that and the race after that. How you can come to a run as you are and leave so much better. How, like the Rolling Stones song says, “You get what you need.”