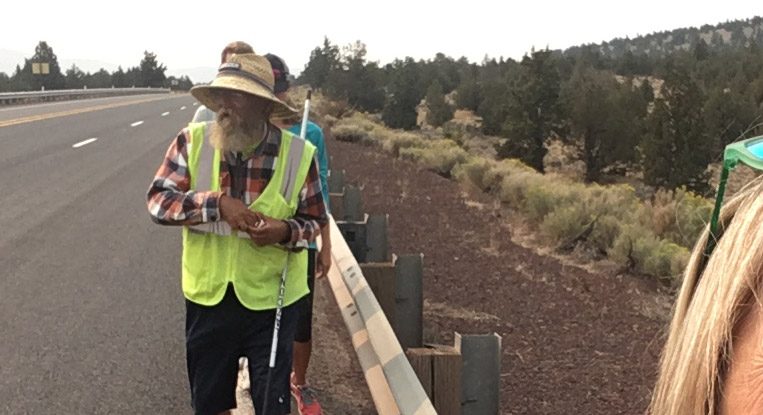 Gary Cantrell (Laz) walks along a narrow section of Highway 20 near Bend, Oregon on his way to the Pacific Ocean. Photo: Amy Clark

Rolling up to Laz, he appeared as though he could have been part of a survey crew, or some form of civic organization in his neon yellow reflective vest. But Gary Cantrell, more commonly known as Lazarus Lake (Laz for short), is far from being associated with any government entity. He’s on a mission to walk across the United States, and he’s almost finished. We caught up with Laz as he traversed Highway 20 near Bend, Oregon, hoping for a little insight on how someone walks the length of the country on foot.

Laz began his transcontinental journey on May 10 in Newport, Rhode Island. If all goes as planned, he should arrive in Newport, Oregon on September 13, just in time to fly back home for the Barkley Fall Classic – a 50K that takes place in Frozen Head State Park in Tennessee, a familiar spot where many have lost a battle with the Barkley Marathons.

Laz’s bronzed calves are the only sign of his lengthy 5,000K journey on foot. His consistent gait and solid form helped him cover approximately 25-30 miles each day. When asked about foot problems, he said he’s been blister-free and has only gone through five pairs of shoes. Holes were cut on the outside of each so that his little toes were free from work, as Laz said, “they get no credit because they haven’t helped me one bit.”

Laz’s popularity spiked after the movie, The Barkley Marathons: The Race That Eats Its Young, aired on Netflix. While the majority of the population is still in the dark about Laz and his infamous race directing shenanigans, he is well-known among ultrarunners. As a writer and correspondent for UltraRunning Magazine since its inception in 1981, he’s written on topics ranging from belonging to the night in 1994 to difficult decisions as the Barkley Marathons RD in 1990. Laz has spent over 40 years embedded in the sport, and has the stories to prove it.

It’s hard to jump on the train of someone’s extended journey and not feel like an intruder. Fortunately, Laz seemed grateful for the company, and openly shared his insight from the road. When asked about his favorite states, he said simply, “Whatever state I’m in, on that day.” Although he did mention that Nebraska had the friendliest people, and Idaho drivers were often dangerous.

As we inched closer to Bend, Laz lamented about the stretch of “hell” highway he’d been on in eastern Oregon and lit a cigarette. He quickly stopped while his crew, Jessica, gave him a cold drink and helped him change into a clean, button-up white shirt. Laz’s journey may have been long, but he’ll reach the Pacific Ocean and return to Tennessee to put on his Race Director hat once again. This time, after finishing the biggest ultra of his life.