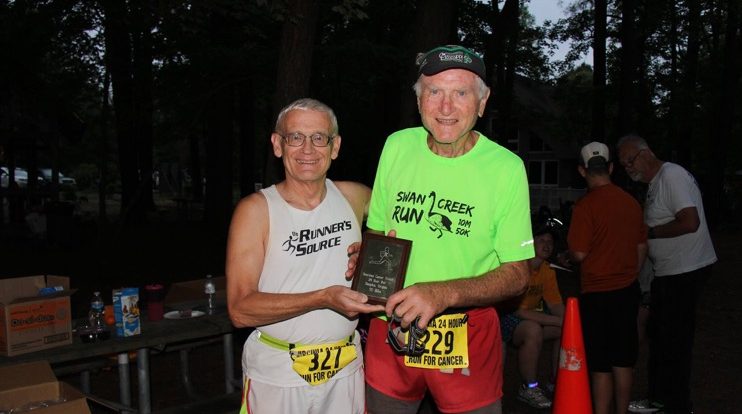 The 14th Annual Virginia 24-Hour Run for Cancer proved that determined people with strong willpower can overcome all obstacles.

The race was again a great success despite a brutal heat wave that never let up the entire time. Heat indexes were reported to be over 100 degrees in late afternoon. Yet 212 people participated, with 124 running over 50 miles, 28 covering over 75 miles, and four even breaking 100 miles.

As it has since the beginning, the event was held in beautiful Sandy Bottom Nature Park in Hampton, Virginia on 29-30 April, 2017. The Park Rangers did a magnificent job getting the trails in top condition. That, combined with a lot of shade and huge amounts of water and ice, is what sustained the runners and walkers through the long hours of heat. Amazingly there were no significant heat “casualties.”

The men’s race started out with three-time winner (and course record holder) Steve Speirs leading the way, followed by a “pack” of several runners a few miles behind. Steve steadily widened his lead all day, while the others bided their time adapting to conditions. Then abruptly, near midnight, Steve stopped with 100 miles. He decided to save his legs for a big 100-miler coming up in the UK in June. That opened the door for the rest of the men, with Mark Manny and Tom Sumrak slowly but steadily racking up miles all night long. With an hour to go they both reached 100 miles and then raced to add a few more. Mark finished first with 103.75 miles, closely followed by Tom with 102.25 miles. 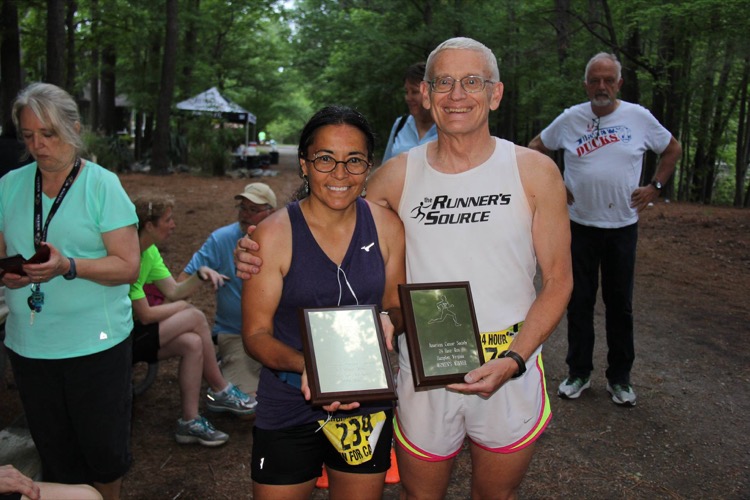 The women’s race was close for the first 12-13 hours, with Paula Carrigan leading the way, closely followed by Lindsey Welch, Christie Summner, Catie Wilson, Andrea McHugh, and Rachel Swift. After about 10 hours, Lindsey had to pull out with Achilles tendon issues. Then, a few hours after dark, Christie, Catie, Andrea, and Rachel had to back off the pace, leaving Paula to slowly and steadily pull away. Paula never seemed affected by the heat and never let up on the pace. As the night wore on she passed several of the fading men. During the last hour, she passed Tom and was gaining on Mark, but fell just a half mile short with 103.25 miles.

I noticed that the women seemed to be handling the heat better than the men. Six of the top 10 finishers and 108 of 212 participants were women.

Other noteworthy performances included Lewis Smith doing 81 miles in his first ultra, and earning the “Best 1st Ultra” award; 93-year-old Robert White matching his record mileage from last year of 22.5 miles; and Cindy Alexander, having never been able to do more than 33 miles, walking 50 miles in honor of her dear friend and mentor, Hartley Dewey. Hartley was a Team Captain for four years, and a champion fundraiser for our race. She finished after battling several physical injuries, proof that absolute willpower can overcome a lot.

As always, all the volunteer lap counters and pacers performed brilliantly. Without them the race could not go on. And it almost goes without saying that the Park Rangers again did a tremendous job ensuring water and ice were replenished, and taking excellent care of everyone. Their participation as a team shows their continued degree of dedication and support. Next year’s race will be April 28-29, 2018. Hope to see you then!