Karl and his family relishing the moment at the finish line Photo: Keith Faccino

Transporting your body on foot for 100 miles in one go seems like an intensely personal and individual experience. And in many ways it is – only you can cover the miles, one step at a time. The physical pain and mental anguish experienced along the way taps you into your inner stuff unlike anything else.

But ironically it is during such a deep dive inside that I have felt more connected to others than at any other time in life.

Maybe it is the shared suffering with other runners that creates unique bonds. Or maybe it is having literally hundreds of helpful volunteers step up for you in your moments of need and vulnerability. Maybe it is the extraordinary commitment and support of your crew and pacers. Maybe it is the deep love of your family who make the effort to be there for you at remote locations in the middle of nowhere. Maybe it is the friends and family that are tracking your progress online and sending you their best vibes and support. Or maybe it is the loved ones who are now departed, but who’s souls are melding with yours when you need them most along the way.

At my tenth Western States last month I experienced all of those connections like never before. At mile 15 I was way behind pace and in 275th place. I came into the Red Star aid station in a world of hurt and anguish. I was hot, getting dehydrated, low on fuel and my ankle was grinding with every step. As I entered the aid station I saw Chris Perillo there volunteering and I knew at that moment that I would be okay. I called him over and asked him to literally yank as hard as he could on my ankle and leg, while I guzzled my protein beverage. Soon I popped up and was handed my two ice water bottles and an icy bandana and I was out of there in about three minutes.

Things were better, but not great. I still felt like I was dragging a tire behind me but I was moving forward. I fell in with some nice runners on the trail. We chatted and somehow decided that Michael Jackson’s white glove was possibly inspired by Darth Vader’s black glove. Like Luke Skywalker, Jackson had a difficult father and the white glove was maybe Jackson’s way of processing that and choosing the light over the dark side. Just the sort of thing ultrarunners delve into while out there on the trail.

I started to explain that I first saw Star Wars at age 12 in 1977 with my grandmother in Jacksonville, Illinois. I was describing that time and place when suddenly my body was tingling and the hair stood up on my neck. I could feel Grandma Claudia joining me for this ride. Suddenly a weight was lifted and I started floating along the trail, running fast, like the old days. From that point for the next 80 miles I was finally racing my race, chasing a silver buckle pace.

Cory Smith, once again doing the grueling “farside” crew duty, had what I needed at Duncan Canyon and that propelled me to a strong split up to Robinson Flat, where my wife Erika, baby Evelyn and Amy Clark had set up a rejuvenating oasis for me.

I was pushed up the steep climb to Devil’s Thumb by Dean Karnazes, and at the Thumb I was greeted by very special friends working at the aid station who told me that I was right on 24-hour pace – lies, but I needed to be lied to at that point. At mile 55 Michigan Bluff I surged out of the canyon knowing that my son Jimmy and daughter Gracie were there waiting for me –
and what an amazing boost that was. I cruised over to Foresthill knowing I would see them again before booming down to the river with Erika pacing.

But when I got to Foresthill I saw a mirage…? My parents were there – oh my gosh, the biggest and best surprise of my life. Their love and support gave me wings and even though I was still behind pace and leaving Foresthill later than ever before, having seen them I knew that I would make it to the finish in goal time.

At the river Amy Clark began pacing me and we really never broke stride until we got to Brown’s Bar (mile 90), finally ahead of 24-hour pace.

I accomplished my goals and finished the race, but this year like never before it was clear that I could not have done it without the love and support of so many others.

Ultrarunning is an individual activity, but it is absolutely a team effort.

May your every run be a great one, 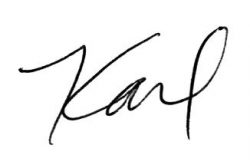