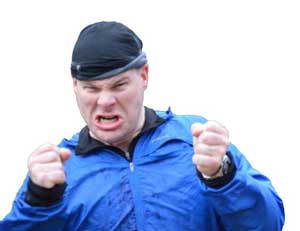 Ultrarunning, almost by definition, is a communal love-fest. It is a friendly, nurturing community, wherein we run together: with one another for the exploration of nature and self.

With the support of a crew, pacers, race officials and aid volunteers, barriers are conquered: topography, distance and time. Fellow runners are thought of less as competitors, and more as compadres—or at least co-conspirators in the absurdity of the ultramarathon challenge. As a result, aggressive competition between runners is largely absent in the sport.

Sure, runners can get snarky in the heat of the moment—at race officials or at their own crew and pacers when things don’t go their way. But this has more to do with the stress of the event, and having their needs (however illogical or self-entitled they may be) properly met.

Seldom do we see bona fide competitive aggression in ultrarunning. But might it have a place in optimal performance? And perhaps even a healthy place?

In reading Scott Jurek’s Eat to Run, I was struck by how powerfully aggression fueled his running. Jurek describes how an internal fire fueled his running, constantly smoldering from his history, personal relationships and limitations. From the very beginning, Jurek describes an aggressive, often antagonistic relationship with sport— an experience that’s at once liberating and torturous.

But his is a story fairly unique to modern ultrarunning. Today’s elite runners are more likely to sing of the joyous camaraderie and self-actualization than to reveal any demons—personal or external—driving their performance. Jurek talks about being an outsider, doubted, ridiculed, unaccepted, and how, through his hard running and decisive, often punishing, victories, he proved others (and perhaps himself) wrong. This was a consistent theme throughout his career, beginning in high school and continuing, despite mounting success, with his Western States, Badwater and Hardrock victories.

His description of his overwhelmingly antagonistic relationship with Western States is particularly striking. Jurek describes “hearing people at the aid stations” ridicule and dismiss him, calling him “The Flatlander” and openly doubting his ability to even survive— let alone triumph—in the deep, baking-hot canyons. The voices touted the strengths and abilities of their local hero, Tim Twietmeyer, and scoffed at Jurek’s efforts even as he led, year after year.

As a veteran of multiple Western States races, I found it difficult to believe that aid station volunteers and spectators would actively and audibly deride a runner. Perhaps that’s what he wanted to hear, or needed to hear, in order to run as hard as he did and win seven consecutive cougar trophies.

Aggression is a healthy part of life, and ultimately has a place in optimal human function. It serves as a survival mechanism to harness emotional power toward action: to protect, defend or assertively meet needs. It can also be used to replace or divert fear and panic and is a potentially potent tool in the mental arsenal of an ultramarathoner.

And I think Jurek knew that. More importantly, so did his pacer.

Jurek’s pacer—the almost-equally-legendary Dusty “Dustball” Olson—was known to use myriad techniques to rile Jurek up before, during and even after the race. Perhaps his was the voice Jurek had heard at the aid stations, not others. After all, the best pacers are known to fib a little: to tell a few little white lies in order to elicit a desired effect from their runner.

Either way, the aggression Jurek developed was expertly utilized. He transformed his fear into action and redirected his selfdoubts outward toward his competitors, and even non-runners. And in doing so, he accomplished incredible feats.

Today, there are a few runners creatively using aggression to fuel their running. A little-known story from the 2012 Western States involves Nick Clark and his pacer, running in fifth place and struggling, but still on the fringes of another podium finish. His pacer knew that, and knew how to push his buttons. Aid stations reports noted that another runner, “So-and-So,” was just ahead. His pacer, inexplicably, began to scream at Clark, “So-and-So is a %*¥¢#@!”

It’s not clear whether the pacer truly felt this way towards the runner, but that was the fuel Clark needed to transform his own pain and the fear of another 20 tough miles into aggressive running. He passed So-and-So and finished on the podium that day.

Western States champion and course record-holder Tim Olson wields aggression to his advantage on race day. It’s a wellknown fact that Olson is known to audibly huff, puff and growl like an enraged beast— creating his own physical expression of aggression— on the racecourse.

Is he truly angry? Perhaps. Or maybe, as with Jurek, some of it is conjured. Either way, it works: pain is pushed aside, or transformed into a potent, record-breaking and competition-shattering fuel.

Aggression works. Like any other emotion, it can be overused and abused. But it is vital aspect of the human experience. We shouldn’t deny it. When wielded judiciously, it channels and focuses potent emotions toward action.

Maybe try something new at your next ‘A’ race: get angry, but don’t bite.