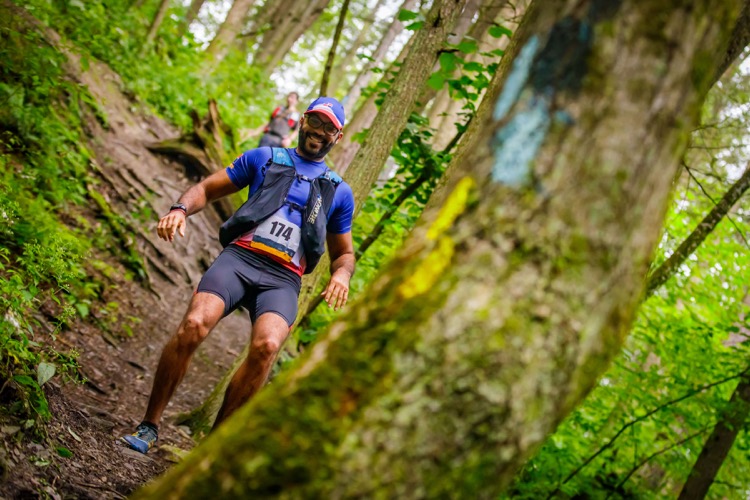 Rain pattered on the tents of camping runners as they woke early Saturday morning in the Finger Lakes region of New York in Ontario County Park prior to the Twisted Branch 100K. Shortly before the start, timing crews accounted for all 173 runners and at 4 a.m., they embarked into the darkness. Local favorite Ellie Pell, an Olympic marathon trials qualifier and JFK 50 podium finisher, moved quickly through the pack and out of sight. Current course record holder and multiple-time winner of the race Jim Sweeney was also running this year. 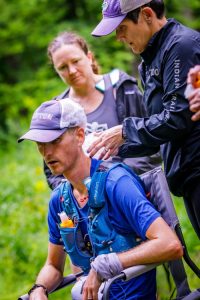 I’ve had the pleasure of experiencing exceptional aid stations like at JFK (e.g., the artisan Christmas cookie station) and at the lesser-known gem of a race in Pennsylvania called Oil Creek. That being said, I’ve never experienced aid stations like those at Twisted Branch. It was as if I had a giant surrogate crew that conveyed care and encouragement which is hard to put into words. Throughout the day, I was filled with a sense of gratitude and camaraderie to an extent I’ve never experienced in a race before. I found myself dedicating segments of my run to the people most important to me, like my wife and five-year-old son, my mom and sister, and my best friends. I was thinking especially of my father who we lost during a bone marrow transplant in the summer of 2019.

By mile 46, I arrived at the Glen Brook aid station and one of “my surrogate crew” asked me how I was doing. I shared that I was feeling relatively good, and that I was drinking and eating well despite the growing heat. “Wow, you’re having a really good day!” they responded. Leaving Glen Brook with some pep in my step and my competitive fire heating up, I realized I was in the midst of “having a day” as they say.

When I got to the aid station around mile 56, the volunteers conveyed to me that the runner in front had managed to maintain a gap of a few minutes. Running between the last two aid stations, I was completely absorbed in the moment and appreciated the unexpected beauty of my surroundings and the pine needle-covered single track. I then arrived at the last aid station, Urbana, at mile 58, with six miles and one last big climb to go. 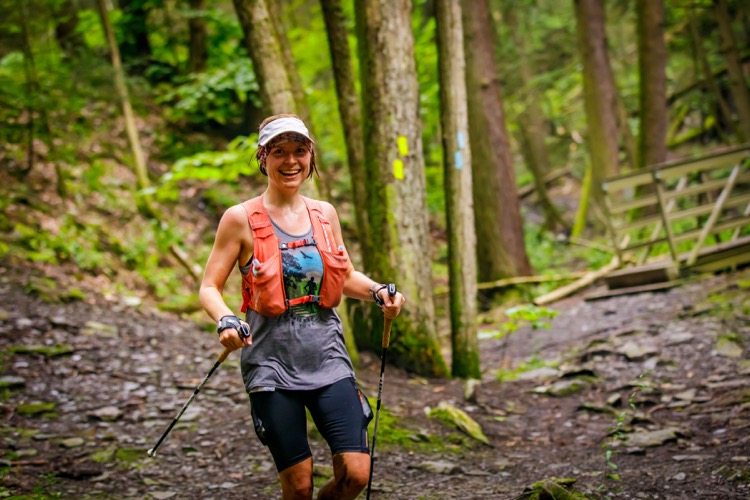 I left the aid station and caught up to the runner ahead of me as we started the final long climb up Mount Washington. As we hit a long steep incline, we both slowed to a hike and had time to chat as we focused on moving as efficiently as possible. His name was Dan, and he shared with me that Phil was the leader. When I suggested that catching Phil was possible, Dan made it clear he was already giving it everything he had. It was just so impressive to witness his determination in that moment. Maybe seeing Dan digging so deep helped me recognize that I still had more to leave out there. Maybe it was seeing his grit or his competitiveness, but I started pushing harder up the climb and lost contact with him. I wasn’t sure if I would ever make contact with Phil, but I was going to find out. It was also around then I was thinking “Sweet! I’m in second place! Wait! What if someone’s coming up behind me? What if it’s Jim Sweeney?” 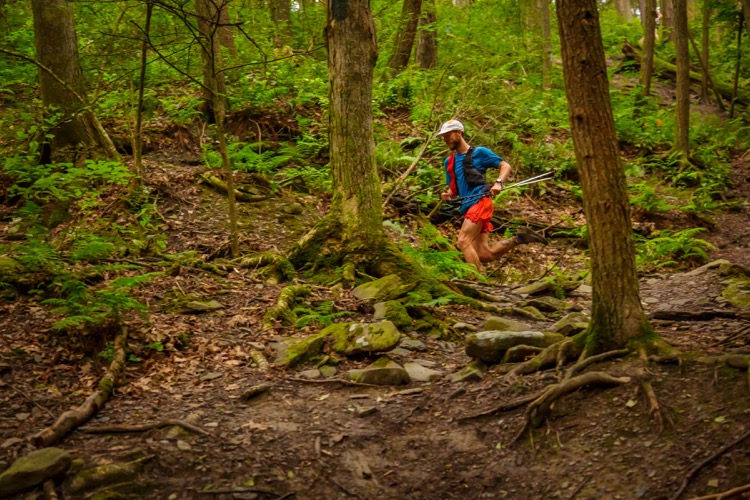 What seemed like a few minutes later, I caught sight of Phil towards the top of the climb. I could tell that Phil was still moving well, but I was moving well, too. When I got on the road, I looked up and I was approached by one of the timing crew. Feeling disoriented, I heard him say, “I’m going to run with you and talk to you about something. There’s a road before the finish with traffic. We don’t want you guys racing across the road, so whoever gets to the road first wins. If you’re going to make a move, you’re going to want to make it now.” The race director Scott was there, too, running beside me for a brief moment and reiterated their concern, slapped me on my back and congratulated me.

As we moved down the final switchbacks, the sound of traffic got louder. I glanced back and didn’t see anyone. I felt the chance of winning quickly slipping away. I remember asking the timing official something like, “Is that it? Am I second?” and feeling a wave of relief as he said, “Yes, you are second,” and I crossed into the finishing area. In the end, I was one minute behind Phil. 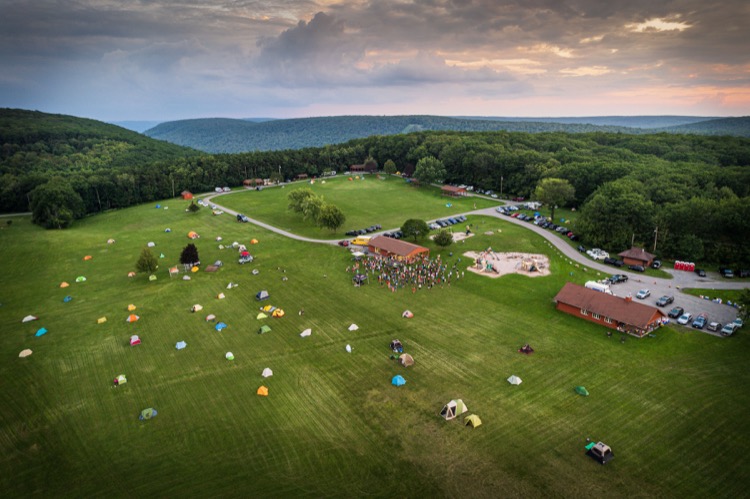 Part of what I’ve experienced after the race reminds me of what I experienced as I’ve moved through the grief of losing my dad (and those that followed that summer). It feels like a shift in something at my core. Maybe it’s a form of growth in what we think of as character or wisdom. Whatever it is, it heightens my clarity of what’s truly important. And it seems to happen through a process of reconciling with pain and experiencing caring connection. As a psychologist, I’ve come across ideas like post-traumatic growth and stress-related growth that fit with this experience. Magic is also a good word for it. Maybe there’s no better portal for this magic than going through an experience like Twisted Branch.

Shawn, I want to congratulate you again on a fantastic and exciting race. You made me dig deeper than I knew possible at 60+ miles into a race. Nobody was able to witness our thrilling battle at mile ~62 when you caught up to me on that descent, but I’ll remember it forever. I truly commend your effort and determination. You have a ton of grit and talent. Were the race any longer or circumstances different, I’m certain it would’ve been me trying to chase you. You deserved to win and I look forward to our future competitions. As you write, I’m truly humbled and grateful for these opportunities. Not just to race but to see everyone out there giving it their all. Whether you’re first or last, the miles and pain are the that common bond. Im thankful that so many supportive people and RDs volunteer their entire day or weekend (not even counting the trail/race prep) so that we can have these amazing shared experiences. These epic races, the emotional and physical toll, and the time on the trail is a perfect chance to reflect on the beauty in this world and appreciate the nuances of life. You said it well, capturing the moment perfectly. Though we didn’t get to chat much, I feel we would’ve had a lot to share. I hope you are well and again, thank you. Until our paths cross again, be well.

Phil,
Thank you. Your comment means a lot and deeply resonates. Congratulations again to you as well. You absolutely ran the best race that day. I was truly in awe in how strongly you ran those final miles and I appreciated your joyful spirit at the finish. I’m sure I will also always remember racing down the final switchbacks. Thank you again for sharing your thoughts. I sincerely hope you’re well and that we cross paths again. Take care.