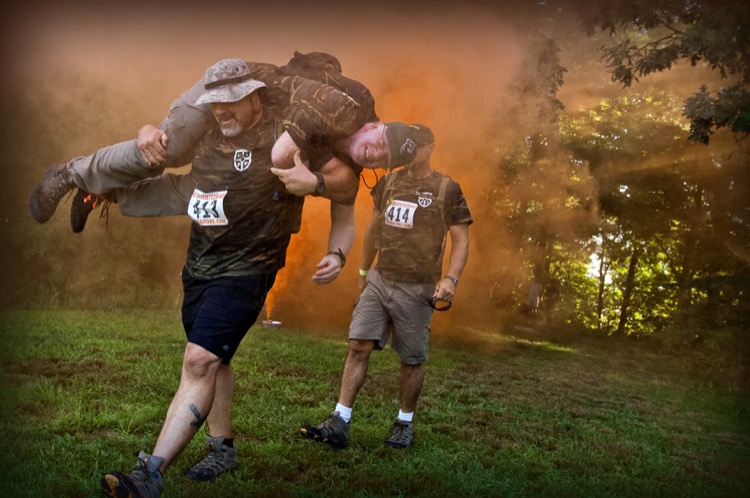 True adventure from a disaster scene: scrabbling up mountains, crossing deep waters, climbing waterfalls, bushwalking, and running endurance distances, all while self-supported, sums up the 3rd Annual Search and Rescue Adventure Race hosted by The Lost Tribe Expeditions. Three words captured the spirit of the race: “Adapt and Overcome.”

Over 150 racers arrived early and ready to compete in what would be the longest six hour course put forth by the Search and Rescue Adventure Race. “Many teams did not know what they signed up for when they arrived onsite at the Mohonk Preserve early Saturday morning. “They knew that parts of the race would be orienteering, but did not know how big the course was, where it would run, and what obstacles lie ahead,” Eldar Spahic, race director said. Fear of the unknown is what brought this race to another level for even our most seasoned obstacle and adventure racers. Even once registered, competitors were only given a glance of the course ahead.

The race started with a physical test, where local drill sergeant/boot camp instructor, Gary Gall, lined up athletes and started them with intense PT drills. In the meantime, the captains of each team were hijacked and taken to another area where they would need to be rescued by their teams. By the time the teams were released to rescue their captains from the disaster scene, thick smoke engulfed the area while a helicopter circled and hovered just feet above their heads creating an intense rescue scene. Captains were carried, pulled, and dragged from the rescue scene to the extraction point; each team that completed the rescue challenge received points towards their total score.

After the rescue extraction, teams were immediately rushed to buses and were driven miles away to the opposite side of the course. The course was approximately 25-30 miles long, by way of trails and carriage roads. Participants were given punch cards and minutes to orient themselves before the starting gun went off. The athletes crossed deep rivers and climbed steep waterfalls in order to navigate from point to point. “It does not matter how hard we challenged them, they kept smiling and pushing forward,” Eldar said. “This year we stepped it up. Every year we try to raise the bar from the previous year. Last year the course was completed by REV3 team who finished the course and collected all 30 checkpoints in under five hours. This year the course was undefeated, but some teams came very close to collecting all the points, which was very impressive,” Erin Spahic, co-Race Director, said.

It is not all about physical fitness, but also intelligence. This race requires strategy, critical thinking, strong team dynamics, leadership, and effective communication in order to strongly complete the race. If communication is ineffective, sometimes we see teams losing team members. In this case, the race turns into a realistic search and rescue. We saw teams this year looking for one of their partners due to a break down in teamwork and communication – thankfully all were safely reunited. This greatly affects team dynamics and adds to time lost on the course, thus causing pressure among team members. We saw teams who struggled last year and came back this year and did extremely well. This shows that they learned from their previous experience and were able to apply it in this race, and that is exactly what this race is all about.

This year’s race was a huge success. The participants doubled this year and we are anticipating even more participants next year. It is great to see that this race exploded overnight leaving a “wow” effect on those who tried the race. The quality of the race will never decrease despite the increase in the number of the participants. Every year we will raise the bar and create a more challenging and exciting adventure. “We worked extremely hard to make sure all the points are placed at the right spots. I ran the course seven times; not many race directors would be that crazy to do it, but I truly enjoyed the course and I wish I could have competed,” Eldar said.

This year’s course was more spread out and the points were kept in clusters. This was done to push the athletes more mentally. “It is easier to know what lies ahead and be cheered for, but it is not easy when now you have to travel to a totally different area to collect the points” Eldar said. The race turned a bit emotional toward the end. As we were looking around, people were hugging each other, giving high fives, recapping the race, and most of all they were laughing and smiling. All sweaty and out of breath, but still loudly saying “this was the craziest and most amazing thing I have ever done! I did not know I could run 30 miles and search for all these points.”

Mother and daughter flexing with their medals. Photo: Erin Spahic

“I must say that they were all winners. The competitors are not your ordinary people; these are people with high potential and a never quit attitude. These are people companies should hire. This race took true team work. Teams were helping other teams through the hard times. The goal of this event is to create one huge solid network of powerful people. The Lost Tribe has surpassed that,” Eldar said. “Let’s work together, not against each other, is the motto of this race.” This is a true “Lifebook” not an electronic Facebook. “Here people give each other real high fives not electronic likes; here people give true hugs and remain friends forever.” These athletes are the most inspiring people and serve as role models and true leaders in their companies, for their families, and communities. “It is not about the destination, it is about the journey.”

For those who would like to find out what they are truly made out of and try to dig deep down and find their Lost Tribe – they should come and join us on one of our next expeditions,” Eldar said. “Our doors are always open and inviting everyone who is like-minded and has a never quit attitude” Erin said.