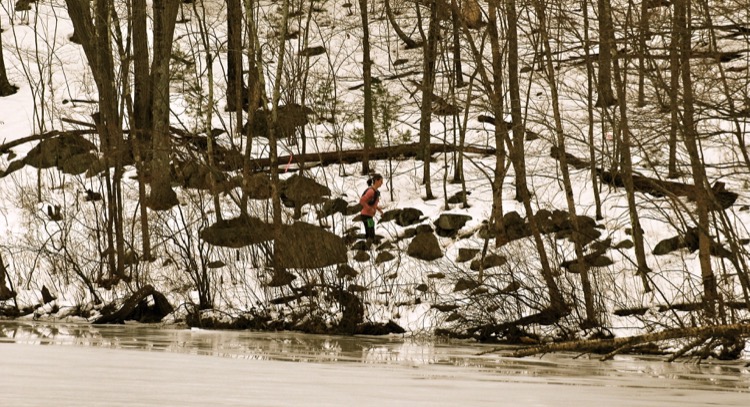 To Hale and Back: Six Hours of Snow and Slush

WESTWOOD, Mass. – A light drizzle pelted around 100 runners gathered in front of Powissett Lodge a few minutes before 8 a.m. on Saturday, March 25. A feeling of anxiety filled the air as they listened to race director Josh Katzman’s final instructions prior to the start of To Hale and Back, the six-hour trail ultramarathon that officially kicked off the Trail Animals Running Club’s new season. “As always, look out for each other while you’re out there – especially today,” Katzman said.

The piles of snow next to Katzman provided a visual to support his directive. There would be no easy miles on this day, not with temperatures in the upper 30s and around 70 percent of the course covered in snow, ice or slush. Hale Reservation is packed with plenty of trip hazards on a dry day; those rocks and roots would be extra dangerous while slick.

Some of the snow melted in the days prior to the race, however, which prompted one more note of caution from Katzman. “When we marked the course, we stuck a lot of the markings into the snow piles…and we didn’t take into account that it might melt,” he said with a laugh. “So you’re going to need to pay attention.” Moments later, Katzman sent the runners on their way to tackle a 3.5-mile loop as many times as possible before six hours expired. 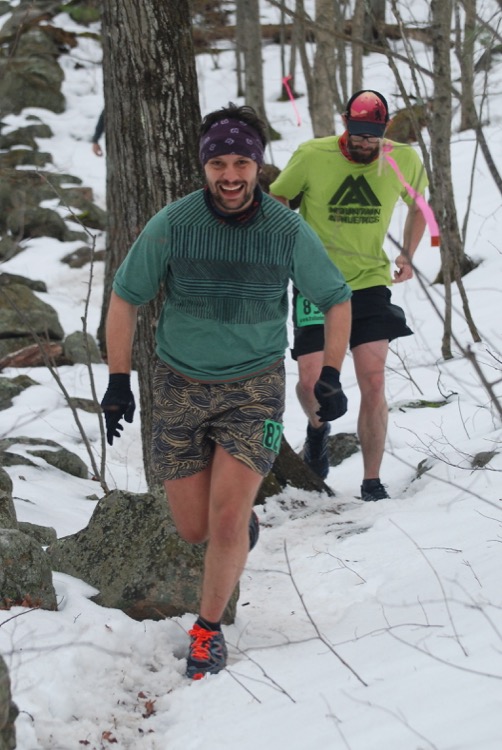 Nobody got lost and the drizzle soon subsided, but the slippery, technical terrain claimed a few ankles to sprains, caused quite a few falls and was responsible for multiple bloody knees. Conditions weren’t consistent throughout the loop, which added to the challenge. The first half had melted the most, so it was relatively flat and fast singletrack with a light layer of tacky mud and occasional pools of slush. The second half of the loop was the course’s counterpunch with some short but steep climbs and plenty of snow, ice and slush to slow the pace and encourage caution. The trickiest stretch came a half-mile from the start/finish. With Powissett Lodge in sight, runners had to navigate five-inch deep, mashed-potato-like snow along off-camber trail along the south shore of Noannet Pond.

“It’s a little slippery,” Lisa Tulipani said with a smile as the 38-year-old Wakefield, Mass., resident navigated the snowy slope. A few minutes later, 29-year-old Ryan Timme of New Haven, Connecticut, offered his own assessment of the trail conditions. “It’s like snowshoeing,” Timme said as he hopped over a rock pile and continued down the trail.

A little while later, Howie Breinan of Hebron, Conn., came through at a steady clip with a grin on his face. The longtime race director of the Trail Animals’ famous “Don’t Run Boston” race looked comfortable and content. “You just have to pace it,” said Breinan, 48, offering sage advice for how to run for six hours in the snow.

Breinan was right about pacing; it was an ultramarathon, not a sprint, after all. No runner struck the fine balance between speed and endurance better than Elise DeRoo. The 26-year-old Boston resident ran the 5,000 and 10,000 meters for the track and cross country programs at Colgate University, and she made her ultramarathon debut at To Hale and Back with a performance that was tactically smart, consistent, and – most notably – fast. After starting the race conservatively by running her first loop in 37:42, which had her sitting outside of the top 10, DeRoo sped up for a 33:55 second loop and moved into the top five. From there she quickly moved into second place and ultimately took the lead around mile 20 while rattling off five consecutive loops between a 32:10- and 33-minute pace. She was the lone runner to complete seven loops in less than four hours. DeRoo closed out the day with loops of 34, 35 and 36 minutes apiece and called it a day when she hit 35 miles in 5:40, good for first place overall. 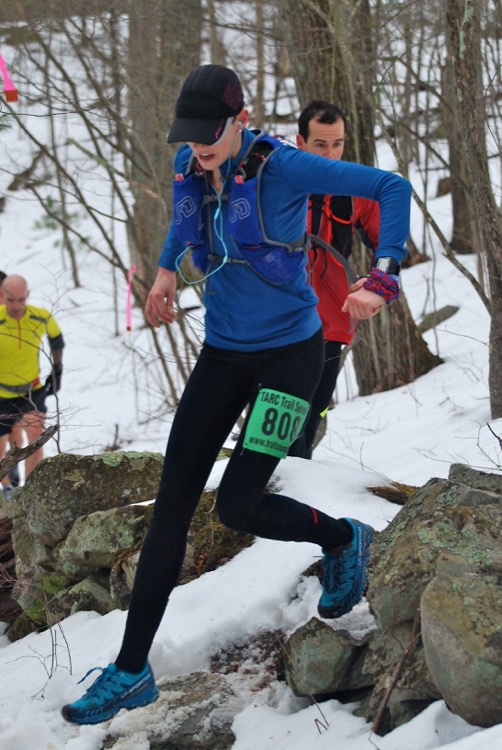 Shortly after finishing, a happy DeRoo reflected on a successful day that included posting her longest run ever by about 10 miles. “Since this was my first ultra, my goal was to finish,” she said. “That was my main goal. “But I had two other goals. I thought it was an actual 5K loop (rather than 3.5 miles), so I had 34 miles in my mind that I wanted to hit. This was a little longer, so 35 would be the equivalent of that. I also did want to try to win, but I didn’t know what the field would be like, and I know there are a lot of phenomenal runners out there. Still, my number one goal was just to finish.”

DeRoo was one of two runners to finish 10 loops of the course. The other, 35-year-old Joshua Fiore of North Andover, Mass., got it done with fewer than three minutes to spare. He was the second runner through loop one, and then held the lead until DeRoo caught him around mile 20. His pace tailed off to 38-, 40- and 41-minute loops by the time he finished circling the course for the ninth time. At that point, 5:23 had expired. Fiore had a solid 50K under his belt, but then he looked at the clock. His eyes narrowed, a sly grin creased his face, and he dashed out of the aid station to give loop 10 his best shot. Somehow he forced his legs to perform more like they did on loops three, four and five than they did on seven, eight and nine. He charged across the finish line about 34 minutes after departing, concluding a 35-mile day in 5:57. 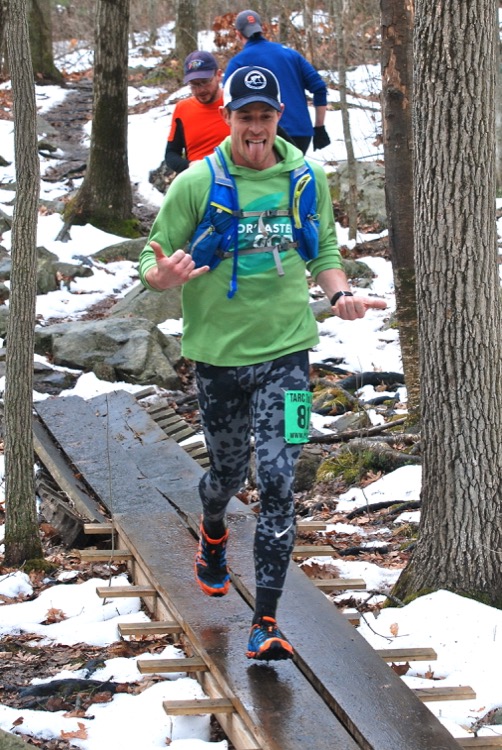 The third-place overall finisher, 31-year-old Gerald Audet of Holliston, Mass., was one of five runners to finish the day with 31.5 miles as he completed his ninth and final loop with 5:41 expired. Tom Dmukauskas, 41, of Somerville, Mass., finished his ninth loop nine minutes after Audet. Timme, 40-year-old John Fegyveresi of Quechee, Vermont, and Breinan all finished their ninth loops a few minutes before time expired.

Seventeen runners completed eight loops for 28 miles, including 28-year-old Samantha LeBlanc of Medford, Mass., who was 11th overall and the second-place female finisher behind DeRoo. Justine Cohen, 44, of Lexington, Mass., was the third-place female a minute behind LeBlanc.

The drizzle returned as the final runners crossed the timing mat, with Katzman there to greet them and offer congratulations. Finally, as the clock struck six hours, Katzman raised his arms in the air, declared the event complete, and made one final declaration: “Welcome to spring!”

You think this was a tough race, check out the Frozen Otter: 64 mi, 24 hr cutoff, on the Ice Age Trail in Wisconsin, in January, completion rate 20%. It is one nasty run. It fills every yr. and most DNF.