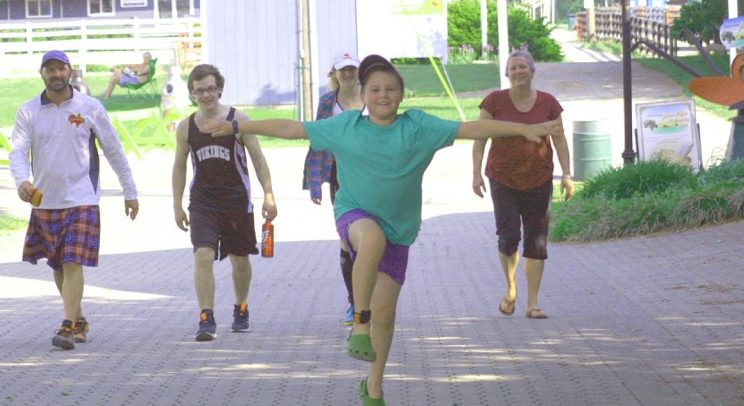 Quinn McNulty spreading the happiness as he ticks off 100k over three days. Photo: Rick McNulty

Three Days at the Fair: Quinner the Winner

It was almost 143 hours into a six-day race when I finished my fifth consecutive eight-minute mile. The end of the inaugural 144-hour event at Three Days at the Fair was rapidly approaching and I was flying around the course with reckless abandon. Over the past four hours I had run 20 laps around the one-mile loop at the Sussex County Fairgrounds in Augusta, New Jersey. I felt invincible.

With a little more than an hour left, I wondered how long I could hold this break-neck pace. Four minutes and 17 seconds later I got my answer. Like a freight train hitting a brick wall, my body stopped. The pain of the last six days crashed over me like a tsunami. Everything hurt.

Fifteen minutes later I arrived at the timing station completely broken. Race director Rick and his son Randy immediately knew something was wrong. Rick asked if I was OK while Randy made sure I didn’t fall over. I could barely move. My goal of finishing strong was officially over.

With an hour left I knew I was done. I hated the thought of leaving that much time on the clock. I wanted to do another lap but a mile seemed like forever. The pain was so great it hurt to look at the blacktop. My mind and body were spent.

“Do you want to do a lap with me?” a soft voice cut through the warbling white noise in my head. Like a lighthouse peeking through the fog there he stood, all five feet and ten years of him, Quinn McNulty. He smiled and said: “I’ll do a lap with you.” At that moment the pain melted away. “Let’s go!” I said.

Quinn was competing in the 72-hour event and is one of only a handful of runners who has logged miles each year at Three Days. Being the youngest child of race directors Rick and Jenn McNulty, Quinn has been a New Jersey Trail Series staple since the very beginning. Over the years I’ve watched Quinn grow up and consider him a friend. Right about now I needed a friend.

Quinn or “Quinner” as he is also known was on his 60th lap and his goal was to run 62 miles or a 100k. With an hour to go he had time to reach his goal but I was worried my dreadfully slow death march would put that in jeopardy. A tenth of a mile later we reached my tent when I realized I was freezing. I rummaged for my jacket and told Quinn he could go on if he was worried about time. At a glacial pace I collected my fleece and returned to the course. Quinn was still there. Bless his heart…he waited for me.

I was painfully aware I might be holding Quinn back but I was so deeply touched he was still there. I then knew Quinn wasn’t going to leave me so I had to step on it. I gritted through the pain and walked as fast as I could, which equated to a 20-minute-per-mile pace.

Over the previous 71 hours, whenever I saw Quinn he would greet me with a smile, words of encouragement and a high-five. There wasn’t a time, this year or any other year, when Quinn wasn’t smiling and having a great time.

Like a tugboat, Quinn pulled me along the course, telling corny jokes and laughing. Walking and laughing with Quinn took my mind off how badly my body hurt and helped me focus on the joy of being on the course. We made our way to the timing station and I knew I was finished. Thank goodness. That last lap was one of the hardest miles I’ve ever completed in any race but because of Quinn it was also one of the happiest.

I thanked Quinn for keeping me company. He gave a smile and was off for his final lap. Thirteen minutes and nine seconds later Quinn crossed the finish line to complete his first ever 100k. This amazing boy averaged more than 20 miles a day for three consecutive days to finish with a total of 62 miles. Did I mention he’s only 10 years old?

This race was chock-full of milestones and memories for Quinn. Not only did he rock a 100k, he also collected his 100th lifetime mile at Three Days, the youngest ever to do so. This year he has reached new heights all while wearing the world’s biggest smile. Three Days at the Fair is an amazing event because of people like Quinn who have always been a perpetual source of happiness. Quinn McNulty is his name, but you can call him “Quinner,” or as he’s affectionately referred by his family, “Winner.” 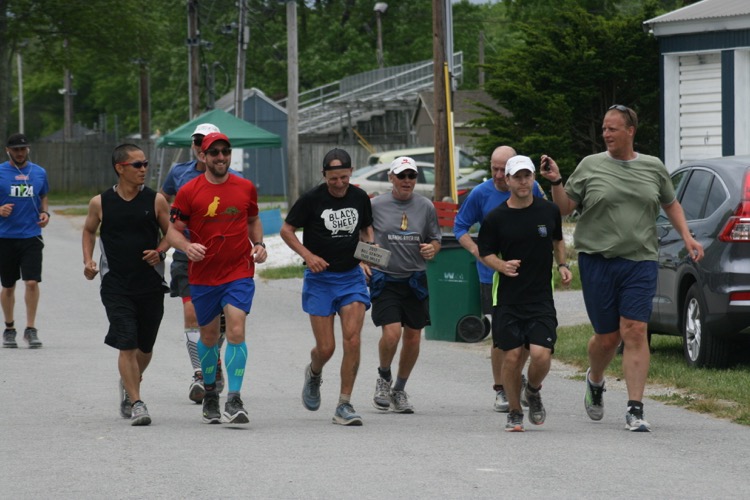 Bill Gentry runs one lap with a brick commemorating 1500 lifetime miles at Three Days at the Fair. Once a runner earns the brick, it is then placed permanently along a brick path at the start/finish area of the course. Photo: Rick McNulty

As a Vibram Five Fingers runner, I was initially excited that Quinn seemed to be wearing them in the photo. But on further inspection … is the little man wearing Crocs?

Ha ha!! Those are totally Crocs.