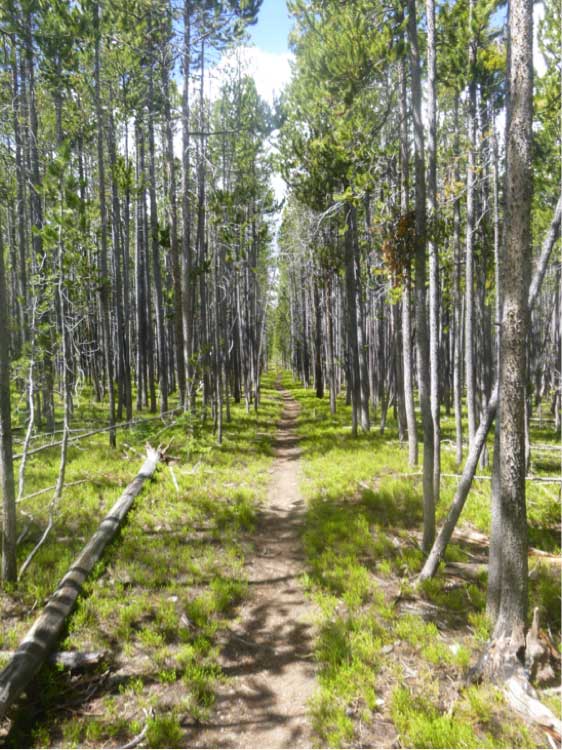 The 100k course started at just over 7,500ˈ at Bannock Pass in the Beaverhead Mountains. The 55k course began at Lemhi Pass, following the remainder of the 100k course. Therefore, all participants needed to be aware of the dangers posed by the scree field, with 100k runners reaching it around mile 51, and 55k runners arriving shortly after mile 23. This 4.5 mile stretch of the course necessitated some fairly conservative cutoff times, but once racers arrived at the scree, the necessity of the safety provisions became obvious.

The Beaverhead Endurance Runs 100k also served as the second, and final, leg of the Idaho 208k Challenge. 15 racers were vying to complete the inaugural Challenge, after completing the River of No Return 108k, just three weeks previous.

Just before the 5:00 a.m. race start, with the American, State of Idaho, and State of Montana flags illuminated under flood lights, racers and participants huddled together for the Star Spangled Banner; then, we were off. Climbing out of the Bannock Pass parking lot, we trudged up single track to join the CDT, which we’d follow for the first fifty miles. Reaching the spine of North America, Montana fell away to our right, while Idaho stretched off to the west.

Just before mile 12, I scared up a bull elk, whose fluffy velvet antlers stood in stark contrast to the rugged and rocky terrain. The stretch of the CDT between Goat Mountain Aid Station and the Twenty Mile Aid Station follows a two-track on a mostly exposed ridgeline, with an occasional grouping of trees. As the miles rolled under my feet, the sun heated the landscape, and the day matured.

The Lemhi Pass Aid Station, at mile 29, served as the only drop bag location for the 100k. From here, more than 60% of the race’s elevation gain still remained to be experienced. With stretches of singletrack straight as an arrow rolling out beneath our feet, we sliced through stands of lodgepole pine that encouraged runners to increase their turnover.

Shortly after the noon hour, the warm morning sun ceded to rain, cooler temperatures, and hail for some runners. But, this subsided as the afternoon wore on. Runners crossed exposed ridges littered with gnarled trees reminiscent of something out of a Tim Burton film.

Janke Lake Aid Station, at mile 51, offered runners a humbling view of the race’s highpoint and the formidable scree field. Runners undulated up and down the scree field, rising to three separate zeniths in short succession, all the while following an eroding path that, if a misstep should occur, would result in the rapid fall of more than 2,000ˈ. Using core muscles and hopping along a tightrope of unstable limestone ranging in size from a cantaloupe to a Fiat, the fatigue of the previous 2 marathons’ distance was placed in the back of our minds as we persevered across this Albatross.

Once the 4.5 mile scree traverse was complete, runners began descending several thousand feet in less than one mile. Many racers welcomed the transition to new muscle groups, even as the decline persisted, ever-steeper. Reaching the Bohannon Creek Aid Station, participants prepared for the final 6 miles, which included the only two creek crossings of the event. Having reached terra firma, runners crossed a small stretch of BLM lands and finished the race at a private ranch a few minutes from Salmon, ID.

Special thanks to the Tarkalson brothers and the amazing volunteers who helped make this beautiful and challenging race a success. Forty-four runners started the 100k, with 41 finishing. Eighty-six runners started the 55k and 82 finished. 14 competitors completed the inaugural Idaho 208k Challenge.

Hayden Janssen writes from Helena, MT and is proud to be a Janji Corps Ambassador. He completed the inaugural Idaho 208k Challenge in a combined time of 33:58:32. You can follow his exploits at www.primitivemechanix.com. To find out more about how you can #RunForAnother and provide water security assistance while sporting trendy running apparel, please visit: www.runjanji.com.

Why a picture of trees when the article is about scree?