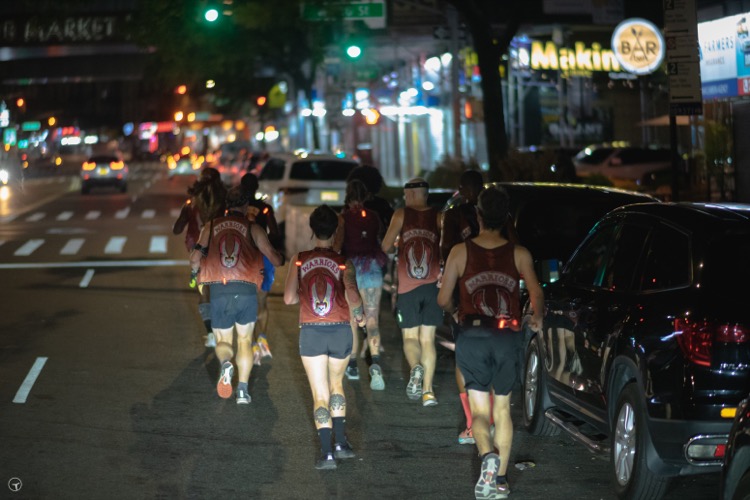 Members of the 2022 Warriors Elite Team are chased through the streets of New York City. Photo: Armando Diaz

In 2019, I announced on Facebook that I was recreating the escape route from an iconic 1979 cult film, The Warriors, and that anyone could join me as I as ran over 28 miles in the middle of the night, from the South Bronx to Coney Island, while dressed as a gang member from the film.

I thought perhaps a few oddballs would join me, but that night, over 20 ultrarunners showed up at Van Cortland Park at 1 a.m.—one guy even flew in from California—and The Warriors UltraRun was born.

For the uninitiated, The Warriors is a beloved cult film about 1970s gang life in New York City, where a racially-mixed street gang gets framed for a murder and must run for their home turf on Coney Island, while hundreds of rival gangs chase them through the streets. With non-stop running throughout the entire movie, and-edge of-your-seat fighting sequences, The Warriors is a fan favorite of ultrarunners throughout the world. 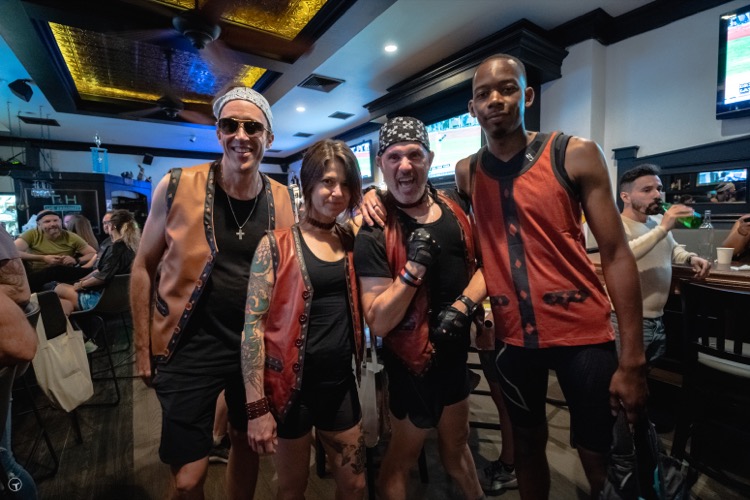 This year, on July 23, we held the fourth annual Warriors UltraRun, which featured 90 costumed ultrarunners in one of America’s leading underground races and the only urban chase anywhere in the world.

“In the Warriors UltraRun, the rawness of NYC is exposed in the early hours of the morning like no other time,” said third-place finisher Aaron Shimmons. “What’s normally hidden in a sea of tourists and hustle and bustle, is on uncensored display as we run through The Bronx, Harlem and further south through the heart of Manhattan—it’s a sneak peek into a city that’s alive 24/7.”

After gathering at the historic Tortoise & Hare bar in the Bronx, where the runners showed off their incredible costumes, we staged a wild “conclave” (or, meeting of the gangs) just off Van Cortland Park to start the race. I climbed up on a stepladder, imitating the leader of the gangs—a character named Cyrus—and raised and lowered my arms as we played audio from the movie, “Can you dig it?” 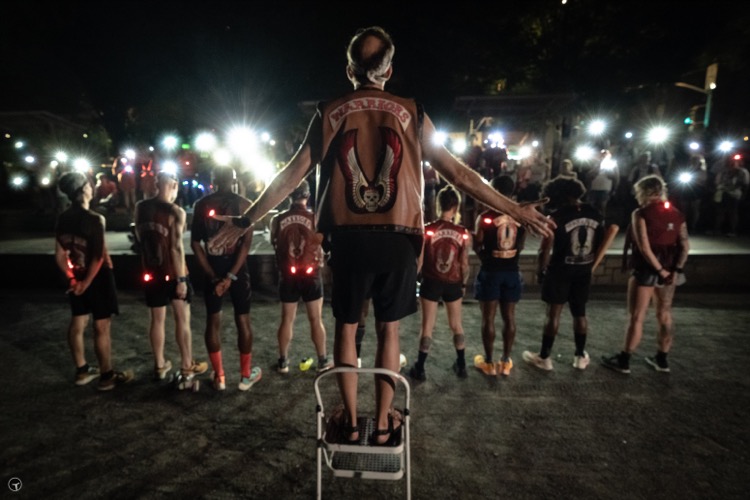 A mob of costumed ultrarunners screamed their jubilant response into the night. Moments later, a gunshot rang out (more audio from the original movie), and the chase was on!

In order to recreate the chase from the movie, we designed a new race format: a GPS-enabled urban chase. That is, we formed a Warriors elite team—a special, nine-member gang consisting of the winners of our prior races and VIP invitees—which is given a 10-minute head start and must stick together all night long, running at a single pace as the gangs close in and track them via GPS.

The 2022 Warriors elite team was led by Keron Alleyne from Black Men Run NYC, who was elected War Chief by his peers. Part coach, part disciplinarian, Keron had the daunting task of driving his gang forward on a sweltering 90-degree night (any runner who drops from the elite team due to exhaustion triggers a 2-minute penalty on the entire team, allowing the field to gain ground). 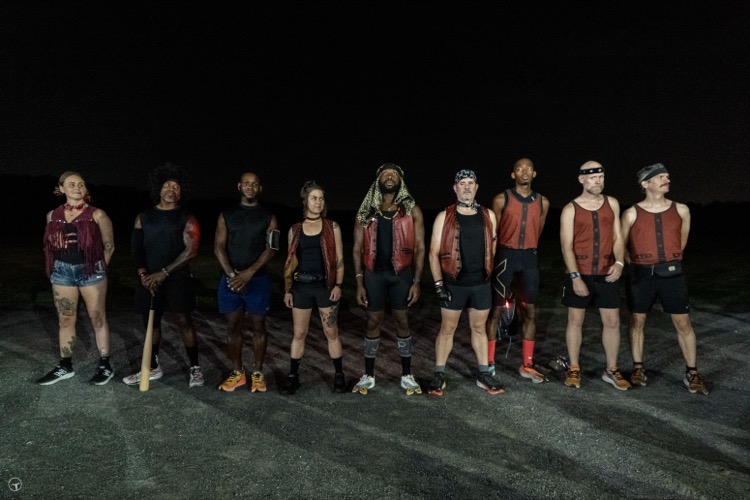 “As War Chief, my first duty was to ensure that everyone was safe and smart on a very humid night,” said Alleyne. “It was beautiful out there, allowing each Warrior elite to take a turn leading us into the night. When we got passed, our team made a smart decision to slow down completely and have fun. The original Warriors got caught in the movie, but that didn’t stop them from making it back to Coney. I like to think we had the same spirit of self-determination.”

The Warriors elite team was passed at mile 7, near the Riverside Park area, home to the movie’s “Baseball Furies” gang, and one of the high points of the race. 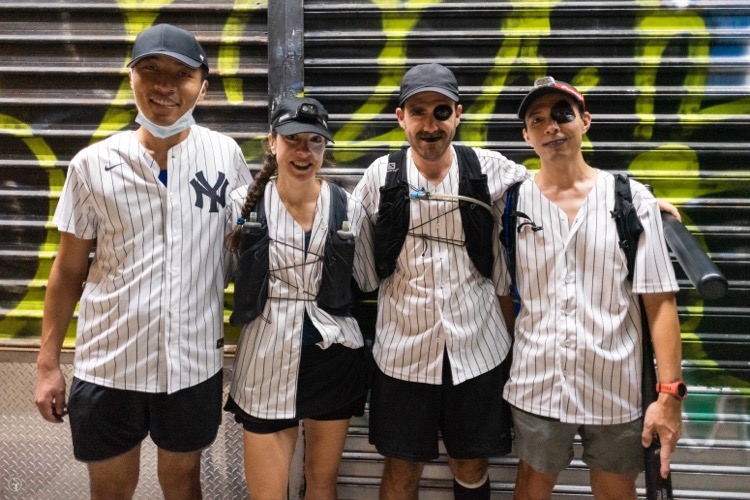 “I knew I was getting close because bystanders on the street were yelling, ‘You’re behind!’ and ‘They’re headed that way!’” said Ahmed Moussa, the first-place male finisher (3:43). “When I caught the elite team, one of the guys from that gang, Richard Scott from Black Men Run, stayed with me and we ran together all the way to the Brooklyn Bridge… Once I got deep into Brooklyn, though, it got really dark and lonely and I started to suffer. When I realized I was getting closer to the beach, I started to feel encouraged, and obviously culminating with the sunrise on Coney Island Beach was the ultimate high.” 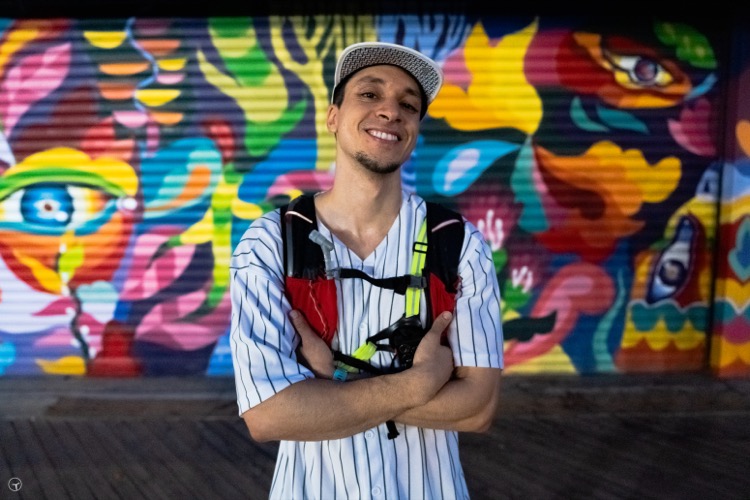 When I founded the Warriors UltraRun four years ago, I hoped that one day the race would attract top NYC area running clubs, who would ultimately field their own costumed gangs. In 2022, this vision started coming into focus as three separate NYC running clubs dominated the competitive field. 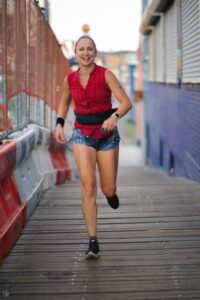 While Ahmed Moussa and Warriors elite team runner Brian Armstrong hailed from the Paragon Sports Run Club, Black Men Run NYC fielded three top runners in the 2022 event, including second-place male finisher Richard Scott and elite team members Keron Alleyne and Brandon Jackson. However, the standout running club at this year’s event was the Prospect Park Track Club, which not only swept the women’s field—Jana Veliskova (first, 4:26), Holly Chase (second, 4:27) and Nora Carroll (third, 4:29)—but came fully costumed in spectacular red and black “Hi-Hat” outfits, one of the most beloved gangs from the movie.

“Ultras are usually a solitary experience, and my expectation for the Warriors Ultra was that it was going to be a solo, mental game running through NYC in the middle of the night,” said first-place finisher, Jana Veliskova. “The actual experience couldn’t have been further from my expectation. Three of us from Prospect Park Track Club ran together for the majority of the race. We used every trick in the book to keep each other going, despite desperately wanting to call it quits because it was hot, humid and very late, and we were so close to our homes in Brooklyn. I didn’t finish this race. Our team did. Together.” 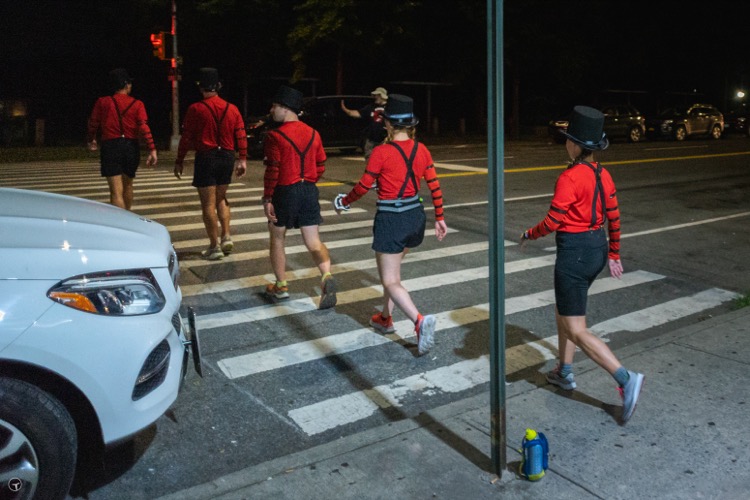 For the 2022 event, Ahmed Moussa and Jana Veliskova won custom Warriors replica vests for their first-place finishes, and positions on next year’s Warriors Elite Team, while the full field nominates one runner to receive the coveted third vest, which is awarded to any member of the field who uniquely embodies the spirit of this race. This year, the honor went to David Prince of the Prospect Park Track Club, who personally orchestrated the gang’s spectacular outfits and drove everyone forward into a winning night.

“I was first attracted by the whimsy and audacity of the concept, but as race day approached, our team got swept up in the spirit of the film,” said David Prince, who was also promoted to the 2023 Elite Team. “And from the minute we arrived in the Bronx, I realized the Warriors UltraRun is much more than a cool fun run or a classic film tribute. It’s performance art. It’s LARPing. It’s a meta-commentary on the ultrarunning community. It’s a singular view of the past, present and future New York City, both the urban reality and its place in our collective imagination. It’s also a whole lot of crazy fun.”