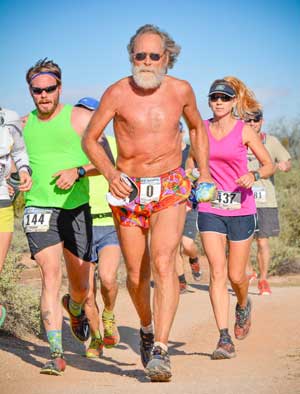 In the five or so years I have been running ultras, I have seen quite a few changes. The first, and most noticeable, is the massive increase in popularity. In 2010, ultras (in the Midwest anyway) were somewhat few and far between. A runner might have to travel six hours or more to find a race at all, and there were few options throughout the year, even if you were willing to travel. In 2014, one must pick and choose based on courses, buckles, distances, course support and a zillion other factors. It seems as though there are new races popping up all over the place every weekend! The massive rise in popularity has increased both participation and public exposure – in both traditional media and social media. Between my runner friends, runner pages and groups, my Twitter and Facebook feeds read like an ADHD version of about 12 issues’ worth of UltraRunning magazine.

This increased exposure has increased to the point that now even non-runners are at least cognizant of the concept of ultrarunning. Guys like Dean Karnazes, Scott Jurek, Christopher McDougal and others have made ultrarunning seem less of a fringe sport for total psychopathic sadomasochists and maybe even somewhat mainstream. Maybe…

Along with this newfound recognition, I have noticed non-runners beginning to lump all ultrarunners into one homogenous group – a new stereotype of sorts. How awesome is this!? We got our own stereotype! By definition, a stereotype is an oversimplification of the group as a whole, and in a lot of cases, the shoe fits. But there are a few traits that are commonly attributed to ALL ultrarunners that I really feel are inaccurate. To set the record straight, here are some of the most egregious ones:

1. All ultrarunners are a bunch of hippies who just bum around and only work the bare minimum to survive. FALSE! There are a certain number of ultrarunners living the lifestyle recently coined “dirbag,” who are out there truly living the ultra dream, but they are not the majority. Nurses, cops, small business owners, stayat- home moms, CEOs and teachers are among the professionals you will find at almost every ultra. Most of the ultrarunners I know have fulltime jobs, families and as many or more responsibilities as any non-runner.

2. All ultrarunners are health freaks who measure and count every free-range, organic thing they eat and drink. Most are vegans who hang out at Whole Foods and plan their next barefoot run across America. Uhm, NOPE! Most of us eat what we like, because we like it, and in whatever quantity we choose. Fast food is NOT the devil and we don’t mind sucking down the occasional triple cheeseburger and washing it down with a giant butterscotch milkshake. Yeah, there are many health-conscious ultrarunners out there because better nutrition does make better runners. However, most of us will never step on a podium and are MORE THAN SATISFIED just to stumble across a finish line – just before cutoffs – to collect our buckle and vanity sticker. Followed by gobs of rich food.

3. All ultrarunners suck down tons of craft beers the night before and immediately after every ultra. NOT! We will drink just about any kind of beer, wine or liquor and sometimes don’t even wait until we have finished the race. And believe it or not, there are many ultrarunners who don’t drink at all, choosing the endorphin high that comes from running over an alcohol-induced buzz.

4. All ultrarunners hate themselves and are just punishing themselves somehow. INCORRECT! The pain of running ultras is a beautiful contrast to the Western hemisphere’s push toward achieving absolute comfort in all things. Feeling the pain lets you know how great you have it in your everyday life. It is not a punishment… it is a reward! We aren’t doing it because we hate ourselves, we are doing it because we LOVE ourselves enough to get out of our comfort zones and live life – in spite of the pain. We push past limits defined by others and sometimes even limits we place on ourselves.

5. All ultrarunners are obsessed with running and it is all they do. NOT TRUE. Ultrarunners by nature have a very wide range of experiences. Chances are that is what led them to the sport in the first place. The desire to take on new and exciting challenges can lead to many different activities. From my experience, ultrarunners excel in a wide variety of activities that take significant commitment – from writing, music, art and theatre to auto body repair, hunting, gardening and motorcycle riding. Not stunted by a fear of the unknown, ultrarunners are well prepared to tackle ANY challenge. Hell, I am in a group that meets bi-weekly to play old school, role-playing game Dungeons and Dragons (my character is a pretty badass level 2 Half-Elf Rogue and I love me that 20 sided die…). But yeah, we do run a lot – and a lot of other things too.

After all the time and miles I have spent on the trails with ultrarunners, I would argue that the ONLY thing that we ALL truly have in common as the group labeled “ultrarunners” is the desire to take on the physical challenge of running an ultra as a way of living a highly fulfilling life. There are similarities among us, but just like the case of the “perfect” running shoe, there truly is no one-size-fits-all personality of an ultrarunner.

Hate to say I believed some of these stereotypes before I ventured into the ultrarunning world.

What a great article! Thanks for writing this. I’m one of those who goes out to enjoy moving forward in the outdoors for a long time, and it’s always nice to be reminded that it’s OK to keep an eye on cut-off times rather than course record times.

Number 4 is my favorite 🙂

Great article Zach. I’m looking forward to running my first Ultra in Ottawa the end of March at 65 years of age. Crazy yes but who cares.

I have run 72 ultras and 38 marathons between 1982 and 1999. I was a regular contributor to UltraRunning magazine during that time. I interviewed and wrote about dozens of ultramarathoners. I would say that their grand, unifying trait is a great intensity that they apply to everything they do. I had to stop running on pavement in 1999 because of a back injury and spinal fusion, not related to running. I still go out on a 4.5 hour run every weekend on the beautiful dirt trails in Sedona. I am 69 years old and will continue this until I have to just walk. Ultra Running is the first human activity and separated us from Neanderthals. It is the most natural activity after eating and sleeping.