The Running Event is an industry showcase in Austin, TX, that offers advance previews of the cool gear we’ll use for training and racing in the year ahead. Our URM team was on the scene, and below is a preview of the items that caught our eye which you’ll be reading more about in 2020. This installment is focused on shoes and apparel, and Part 2 will be hydration vests and accessories.

(As always with preview posts, please note that any of the spec information listed below, especially availability dates and MSRP, are subject to change before release.) 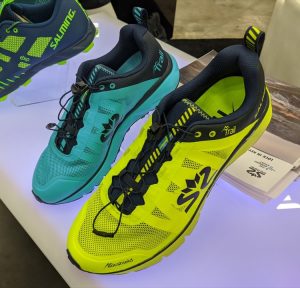 Salming
Salming is updating its longstanding (if not very cleverly named) Trail line with the Trail 6. The spring update features an overhaul of the entire upper, which uses two-layer mesh construction with a thin TPU exoskeleton overlay. The shoe was shown with quick laces, but these may be converted to a traditional lace system in the final production model. The midsole geometry is unchanged – 24mm in heel, 19mm in forefoot – as is the Vibram Megagrip outsole. Weights are 10oz (men’s) and 8.1oz (women’s). The Trail 6 is available in February 2020 and will retail for $140. 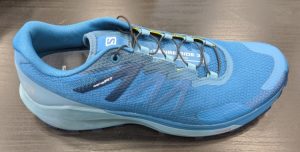 Salomon
In spring 2020, Salomon will release the Sense Ride 3, which features the company’s new Optivibe high density foam insert. This technology is designed to absorb and attenuate vibration in the lower leg without affecting the overall rebound ability of the midsole platform. The net result is decreased lower leg fatigue over multi-hour efforts. Otherwise, the Sense Ride 3 is very similar to the Sense Ride 2, with stack heights of 27mm in the heel and 19mm in the forefoot. Weights are 9.5oz (men’s) and 8.5oz (women’s). The Sense Ride 3 is available in February 2020 with an MSRP of $120. 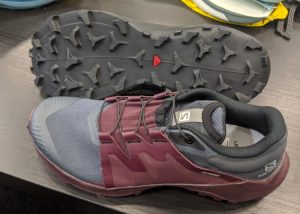 A fall 2020 release from Salomon is a wet and wild cousin of the popular Speedcross model, intended for highly technical and/or muddy terrain. The Wildcross has a slightly wider toe box than the Speedcross line, and higher profile multi-directional 6mm Contragrip outsole lugs. The normal Sensifit midfoot stabilization has been augmented with Dreamtex TPU mesh wings that are water repellent, and a robust toe cap provides protection for pushing the pace. The Wildcross weighs 10.2oz (men’s) and 8.8oz (women’s), has stack heights of 25mm/17mm, and will retail for $130. 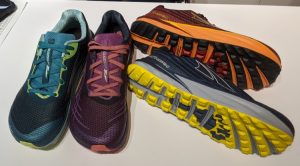 Altra
As usual, Altra has a number of new models in the pipeline for 2020. First up is the Timp 2, an update of the shoe that was Altra’s fastest growing model in 2019. The Timp 2 is a much sleeker and performance-oriented version of its predecessor, shaving more than 1.5oz off the previous spec weights. This zero drop (or as Altra now describes it, balanced cushioning) platform has stack heights of 29mm in heel and forefoot, but the underside has been extensively remodeled with large flex grooves and a new MaxTrac outsole configuration for improved grip and stability. The Timp 2 weighs 9.9oz (men) and 8.7oz (women), and will be available in February 2020 with an MSRP of $140.

Summer will see the release of the Superior 4.5, and in Altra nomenclature, the “.5” designation typically signifies modifications strictly related to the upper. The 4.5 continues the burrito wrap lacing system, but has thicker sidewalls throughout the upper, and a modified mesh that is simultaneously more breathable and abrasion resistant. The Superior 4.5 has a flat 21mm platform, weighs 8.9oz (men) and 7oz (women), and will have an MSRP of $110. 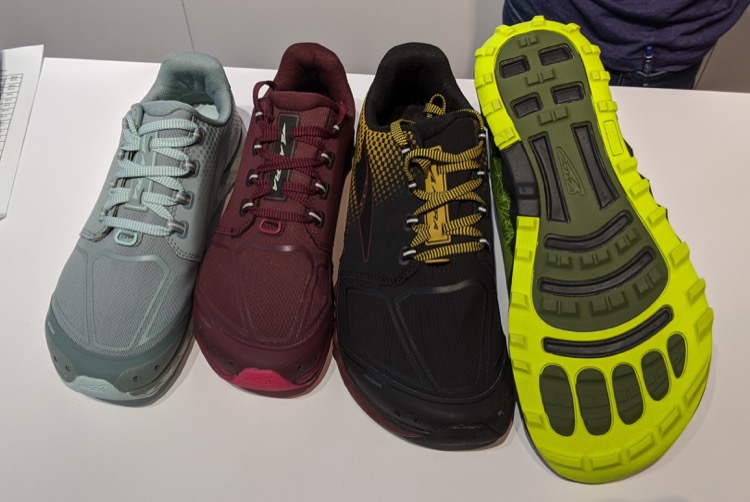 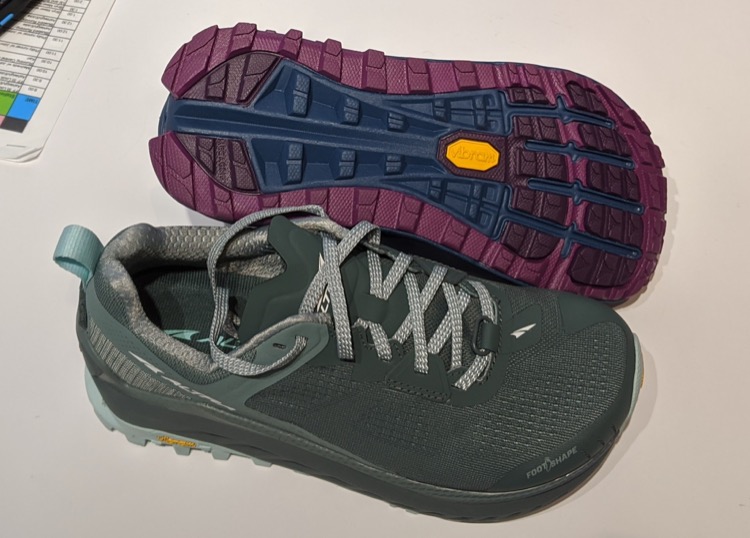 The most extensive overhaul we saw in a trail model belongs to the max-cushioned Olympus 4, which will be available in fall 2020. Weighing 11.6oz (men) and 9.6oz (women), the updated model is almost 2oz lighter than its predecessors, with an engineered mesh upper with welded abrasion resistant zones that decrease stitching. The overall fit of the upper is more snug, and a slightly sunken heel improves rear foot stability. The 33mm zero drop midsole is a lightweight EVA/TPU blend, with a rounded heel to encourage smooth transition, and the midsole/outsole combination uses decoupled lugs that work independently to maximize ground contact on rocky terrain. Retail price for the Olympus 4 is $170. 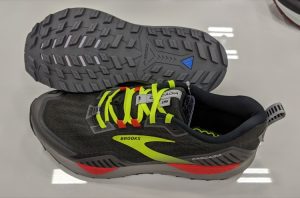 Brooks
Fall 2020 will see the Cascadia 15, which is more of a cosmetic update compared to the significant overhaul seen on version 14. The outsole and midsole remain the same, with super grippy TrailTrack rubber, stack heights of 24mm/16mm, midsole rock shield, and four-point pivot system. A new monoloop engineered mesh upper has fewer overlays compared to the 14, and the new model has gaiter tabs and attachments that are compatible with any model gaiter. This shoe will also be available in a Gore-Tex version. The regular versions weigh 10.7oz (men) and 9.5oz (women) and will retail for $130. 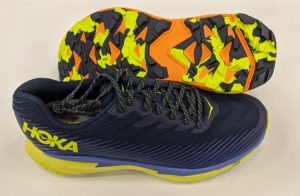 HOKA One One Torrent 2

HOKA ONE ONE
HOKA’s Torrent won our best new model award in spring 2018, and it’s been on the market for two full years without revision because of its success. Fans of this model should welcome the Torrent 2 in fall 2020, as it has some modest changes while keeping the core midsole/last/geometry of the shoe intact. A new engineered mesh upper is more form-fitting than its predecessor and a new, slightly padded tongue has a half-length gusset for improved downhill stability. Lug placement on the outsole has been slightly reconfigured with the same depth and rubber compound. The Torrent 2 has stack heights of 23mm/18mm for men and 21mm/16mm for women, weighs 9oz (men) and 7.4oz (women) and will retail for $120. 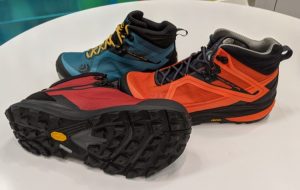 Topo Athletic
In 2020, Topo turns its focus to multi-day and lightweight speed hiking with the new Trailventure high top models, built on a similar foundation as the company’s high performance MTN Racer platform, with stack heights of 30mm/25mm. The uppers of these models use a durable ripstop mesh and medial drainage ports for quick water release, and a Vibram XS Trek outsole provides durability and traction along with a rearfoot rock plate for impact protection. Weights for the Trailventure are 13.1oz (men) and 12.1oz (women). The regular Trailventure will release in February and retail for $140; an E-Vent waterproof version will follow in the fall for $160. 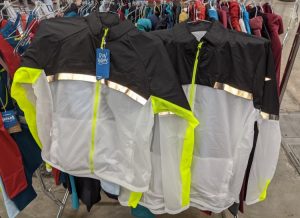 Brooks
Brooks has been a forerunner in enhanced visibility of running apparel and fall 2020 will see a new Night Light collection featuring high contrast, high visibility colors and 3M Scotchlite Carbon Black Stretch reflectivity in critical motion zones, which help drivers recognize movement in the dark. The Brooks team did extensive field testing at 3M headquarters in developing the Carbon Black reflective accents, which are unlike traditional reflective material in that they have full stretch capacity along with the rest of the fabric. Testing at the 3M lab demonstrated that these lightweight men’s and women’s Carbonite Jackets can be seen by drivers up to 600 feet away from an approaching runner, which should provide ample time for detection and evasion. They will retail for $180. 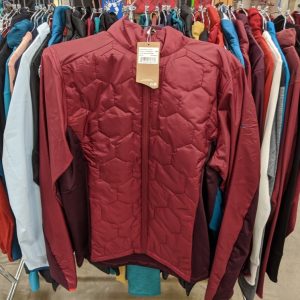 For colder weather, the Shield Hybrid Jacket positions windproof, water resistant insulation on a front panel, with lightweight, soft, and highly breathable stretch mesh fabric in the back for temperature regulation. The entire jacket packs into its own pocket and has attached straps that allow it to be carried as a backpack when stowed. The Shield Hybrid will be available in September and retail for $160. 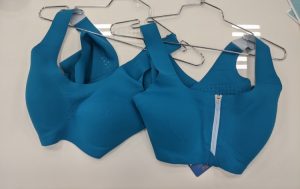 Brooks is giving added focus to its line of running bras in 2020, with the Dare Zip and Dare Crossback available in spring 2020. These bras combine encapsulation support with memory foam in the cups, an integrated bottom band for added support and comfort, perforation venting in high heat zones, and chafe-free stretch fabric in the straps. Fall 2020 will see expanded size ranges of both these models beyond the initial sizes available in spring. The Dare Zip retails for $70, and the Crossback version will be $60.

rabbit
One more of the many reasons we’re looking forward to summer is to test rabbit’s new surf ‘n turf shorts that are slated for a July release. They exude classic Cali vibes, coming in floral prints as well as horizontal stripe surf designs for both men and women. Rest assured they are still performance apparel, made with stretch woven panels along with rabbit’s exquisitely soft and moisture-wicking crepe brief liner. Retail prices for the men’s and women’s floral or board short styles range from $60 to $68. 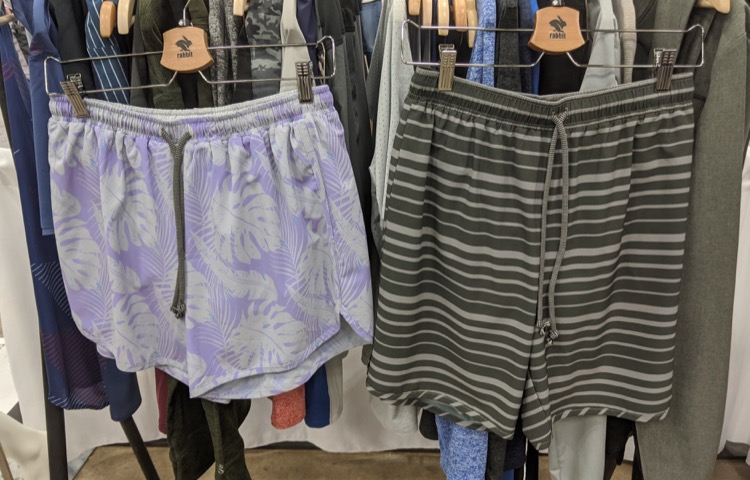 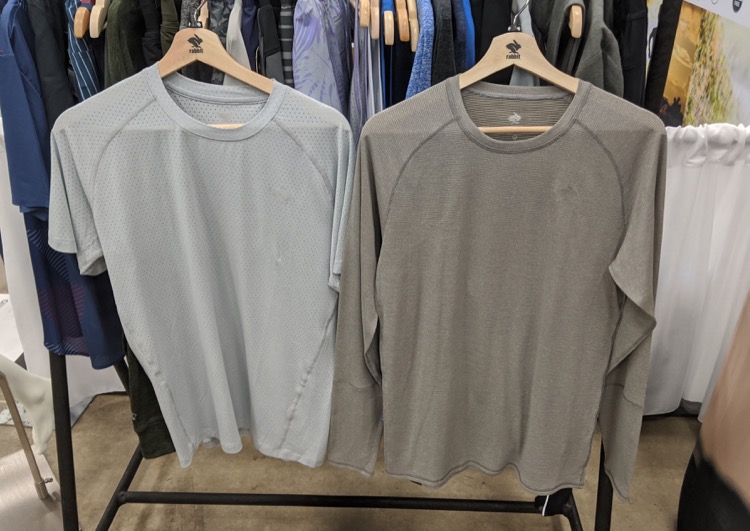 A nice complement to the Cali shorts might be the ez tee performance fabric shirt, which takes the exceptionally soft fabric of the ez tee shirt and adds massive perforation throughout the entire piece to provide maximal air flow and ventilation. The men’s style will retail for $45. When the weather turns cool, rabbit will introduce the men’s RIBbit, which is noteworthy not just for including capital letters (something rabbit avoids at almost all costs), but because it incorporates a new Polartec Powerwool blend into the garment. The wool layer sits against your skin for softness and warmth, while the exterior polyester surface helps with moisture wicking. The RIBbit will be available in October and retail for $85; a women’s equivalent called the re-run will sell for the same price.

Also in October, rabbit expands its eco-friendly ethos by introducing the swish jacket, a lightweight hooded full zip that is made from a fully bio-based polyester blend. A predominant component of this bio blend is recycled coffee grounds, which are quick drying and also control odor. Don’t worry, though – we stuck our nose in this one and it didn’t smell like the inside of a Starbucks. The swish is available in men’s and women’s styles and will retail for $120. 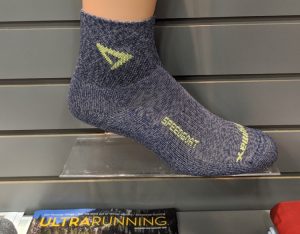 Drymax
Drymax is famous for its signature models named after their elite athlete partners. In February 2020 we’ll see a redesign of the longstanding Speedgoat sock developed with the goat himself, Karl Meltzer. This is a model in the Drymax Lite Trail collection, which will be available in mini, quarter and full crew versions, with prices ranging from $13.50 to $15.

The other noteworthy development from Drymax is the expansion of the full trail running spectrum to include full crew versions of almost all their models. For example, the Lite Trail Ellie Greenwood signature model (in pastel green) will see a new crew version, as will the full color run of regular Trail Running and Extra Protection socks in the lineup. 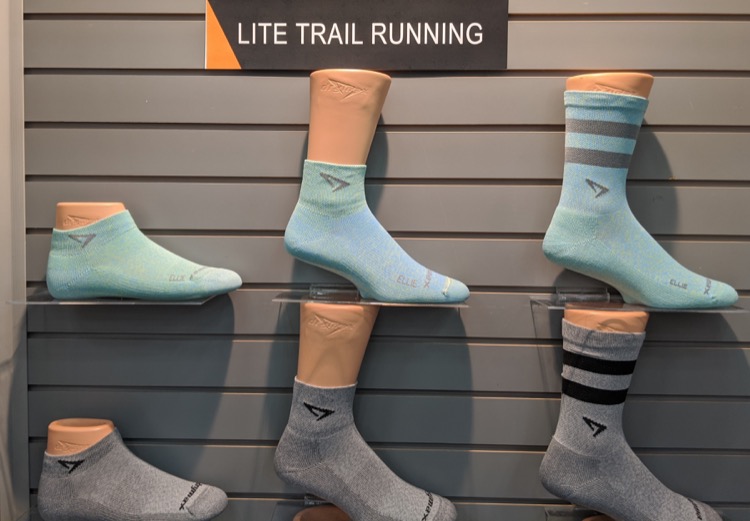 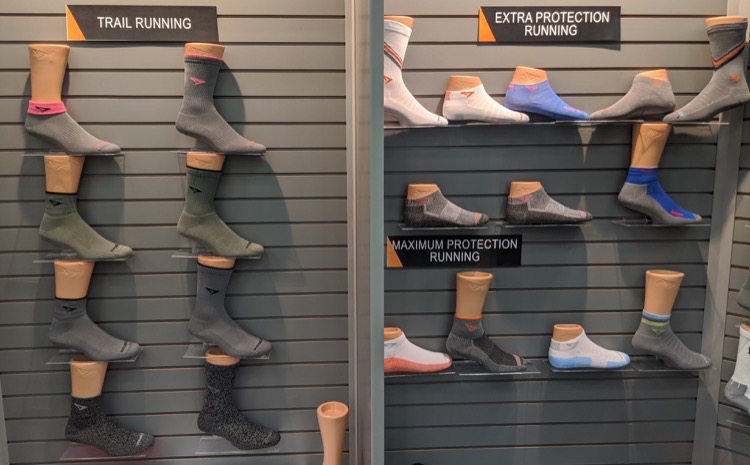 Nathan
Nathan wants to keep you cool in 2020 – as in literally making products to help lower your body temperature. Their RunCool series has three products, starting with a poly nylon neck gaiter and bandana that have full zip pockets to accommodate stashing ice; no more having to tie fancy knots or practice buff origami to keep your ice in place. The RunCool Gaiter converts to a hat with a drawstring mechanism, and the RunCool Bandana can be worn on your head, neck or wrist. The RunCool Hat is a classic soft fabric style, but has dual stash pouches to keep ice in place without sliding around the top of your head. These items will be available in spring 2020 at price points of $20 for the bandana, $25 for the gaiter and $30 for the hat.

Nathan is also introducing a very distinctive line of running gear for 2020… but for that, you’ll have to stay tuned for Part 2 of our recap.

Diamond in the Rough: Kate Olson

We Must Acknowledge a Problem