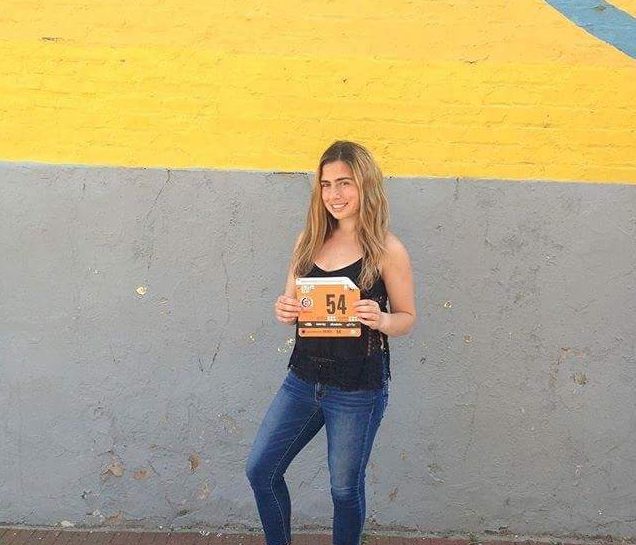 Rachel Belmont with her race bib the night before the race. Photo: Daniel Belmont

You never forget your first ultramarathon. On April 29, at 20 years old, I completed The North Face Endurance Challenge Washington D.C. 50-Mile. It was by far the most humbling, mind-breaking, and physically challenging 11 hours and 54 minutes of my life.

After waking up to my alarm at 2:30 a.m. after barely three hours of sleep, I anxiously gathered my Camelback and headlamp before catching the first shuttle to Algonkian Regional Park. As I stepped up to the start line at 5 a.m., all of my senses snapped into reality. After getting the cue to start, we all sped off into the woods in the pitch black, our headlamps guiding the way.

A few of my favorite moments early on included watching the sun rise over the water and the fog sweep across the fields. The only way I could describe it is total zen. This was the honeymoon portion of the race, before circumstances presented more of a challenge. Before running the 50-miler, I did a significant number of long runs. My training consisted mostly of several back-to-back long runs, with my toughest being a 15-miler on Saturday and a 25-miler on Sunday three weeks before the ultra. Two weeks before the ultra, I ran my longest run of 32 miles, with no double that weekend. However, I didn’t do any “real” trail running or hill work, which can explain why I was so overconfident going into the race. Boy was I in for a surprise. For someone who’s primarily a road runner, the course presented a huge challenge to me. I never experienced that many steep hills and inclines in one setting. I got to a point in the race where my legs were so tired that I had no choice but to walk up them. Not to mention I created a lengthy list of creative choice words using the term “hill.”

With temperatures rising over 90 degrees, the heat was another challenging factor. I was in pretty awful shape when I hit the mile 33 aid station. I was dehydrated, hallucinating, beyond fatigued, in serious pain, and my head wouldn’t stop throbbing. However, two more experienced ultrarunners asked if I wanted to join their group. I can’t begin to thank those runners enough. They provided me with salt pills, water, told me to keep eating, and constantly motivated and pushed me past my limits, regardless of how nauseous or tired I felt. We worked together as a team by walking up the hills together and running in short intervals.

The truth is that no one felt good during the race. The heat was over 90 degrees, the hills seemed endless, and my body was screaming at me every possible reason to stop. But teamwork prevailed that day. With about eight miles to go, we picked up some other runners, calling ourselves the “pain train”– a twisted sense of humor always helps, right? The course became more bearable with more flat portions and running with others helped significantly. We exchanged personal stories to pass the time and mask the pain we were all going though.

Over the last few miles adrenaline and the anticipation to finish kicked in. After stopping at the final aid station to pour water over my head and shove a few ice cubes in my mouth, I ran as fast as my fatigued legs could carry me to the finish. I don’t think I’ve ever experienced more happiness, relief, and excitement than I did after crossing that finish line. It wasn’t just a “finish,” it was a culmination of all of my hard efforts that day. I learned more about myself in those 11 hours and 54 minutes than I have throughout my life. I always thought I was tough, but nothing I’ve done really ever came as close to what I accomplished that day. Knowing that I just ran my first 50-miler at 20 years old gives me so much confidence for the future. I realize that I’m truly capable of anything I set my mind to, regardless of how impossible it seems at the time.

I had three knee surgeries between 2014 and 2016, but am currently running pain free, and have completed four full marathons, and now one 50-miler. The most important thing I’ve learned is to never look at your current situation as an indicator of your future. After tearing my ACL and meniscus in 2014 and being strapped in a full-on leg brace, the last thing I thought about was running a 50-miler, let alone a marathon anytime soon. I have so many goals for the future, including running my first 100-miler one day, as well as racing a marathon on all seven continents.

As much as I want to run another ultramarathon next year, it’s unbelievably time-consuming training for one, especially since I’m a full time college student. I balanced training while taking 17 credits, maintaining a 3.89 cumulative GPA, and working for the majority of the spring semester. I also had finals the week of my race. Next year I plan on applying to physician assistant schools, ranging from programs in Oregon to Washington D.C. I’m currently shadowing a surgeon as well, adding to my already-busy schedule. However, I’m really excited about a challenging international marathon I’ll be running in the summer of 2018, which may just be the craziest thing I’ve done yet.

This summer I’ll be taking some down-time to backpack around the Middle East, Europe, and Africa before starting my junior year of college in September. I’m constantly trying to reinvent, challenge, and find myself, which is the primary reason why I took on 50 miles. It was by far the most life-changing decision I’ve ever made.