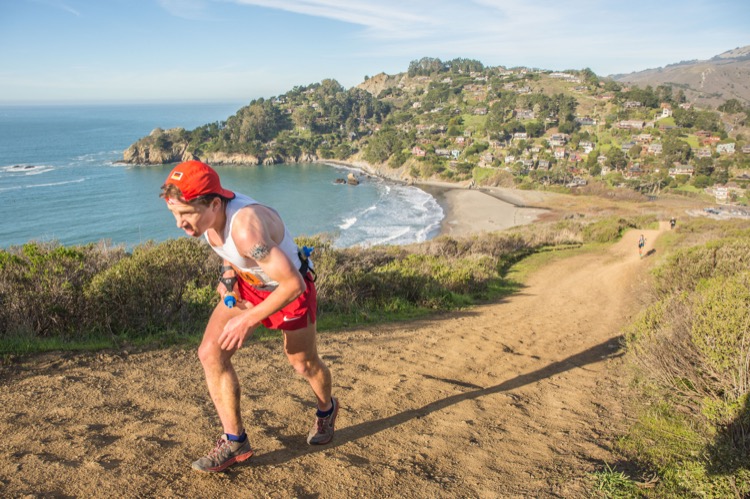 The unstoppable Zach Miller charged out of Muir Beach with Hayden Hawks lurking behind and ready to pounce if Zach faltered. Photo: Myke Hermsmeyer

The pace was hot from the beginning! With Zach Miller leading the way in his usual fashion we blew through the first mile at 5:56 a.m. and didn’t slow from there. Either I thought this pace was sustainable and forgot it was a 50-mile race, or I just felt like running fast and didn’t care what would happen. To be honest though, it did feel sustainable. Some might say this is dangerous but it has been working for me so far and really tests my body, becoming a game of some sort.

I pushed up those first hills and by the time I reached the top, I saw no headlamps behind me, even though Zach was a lot closer than I thought. You can’t just run away from Zach Miller, he owns this game! This is when the aspect of trail running that no one plans for happened – a wrong turn! Crossing over the road and onto the bridge before the climb up to Cardiac I took a left turn when it was supposed to be a right. I ran out for a little over a minute and soon realized that there were no flags. As I came back to the bridge I quickly saw the correct route and a white singlet owned by Zach about a minute or so ahead of me. The chase commenced and I was able to make up the time and catch Zach by the top of the hill. I don’t believe this changed the outcome much and believe Zach would’ve won anyway. He was too strong and this wrong turn was early in the race.

The fear of this fast start kicked in on the Coastal Trail as we saw Sage Canaday pushing hard to pull us in. Thoughts of doubt started to creep into my head that we might have gone out too hard and neither of us was going to win. Maybe the entire field was going to catch us and maybe this was a mistake. These thoughts were quickly overcome with competitive juices as Zach made another pass and memories of all the hard training that I had done kicked in. We were feeding off of one another and the devouring couldn’t be controlled.

Runners take in spectacular views of the Golden Gate Bridge and other beautiful sites in the Marin Headlands during the race. Photo: Myke Hermsmeyer

Dropping down into Stinson Beach was tough. I knew that I needed to keep it close with Zach on this section. I pushed extremely hard, maybe a little too hard on this downhill section chasing Zach across rocks, steps, and mud with the aftermath apparent in my wearied legs.

I don’t know if it was me or the woods but I learned a lot about myself in Muir Woods. There is always that moment in any race where darkness kicks in and you have to either fight through that darkness knowing that light will always come, or give in to the darkness and be consumed by it. Luckily for me, I have learned about this and confronted it head on in many of my races over the years. I have learned to never give in and have the faith that I am stronger than I realize. I once again fought through this and suddenly I was out of Muir Woods and onto a flat section heading towards Muir Beach. The light brought warmth and more warmth came as I turned a corner and saw Zach again easing back towards me. The hope of winning this race came back into my soul, but the pain of almost 41 miles also came.

The last 10 miles were filled with so many emotions. If it wasn’t for the knowledge that others were feeling the same way, family and friends encouraging me, and a nice paycheck waiting for me, the pain might have overcome me.

Crossing the finish line a mere two minutes behind the great Zach Miller and hearing the roar of the crowd almost brought tears to my eyes. Many might say that this was incredible, outstanding, the fastest debut ever, absurd, and many other generous things. All I know is that I had fun doing what I love to do and feel a sense of belonging. Like my coach Nate Houle told me, “Always maintain the love/magic of what you’re doing, mix in some competitive juices come race day and you’re unstoppable.”