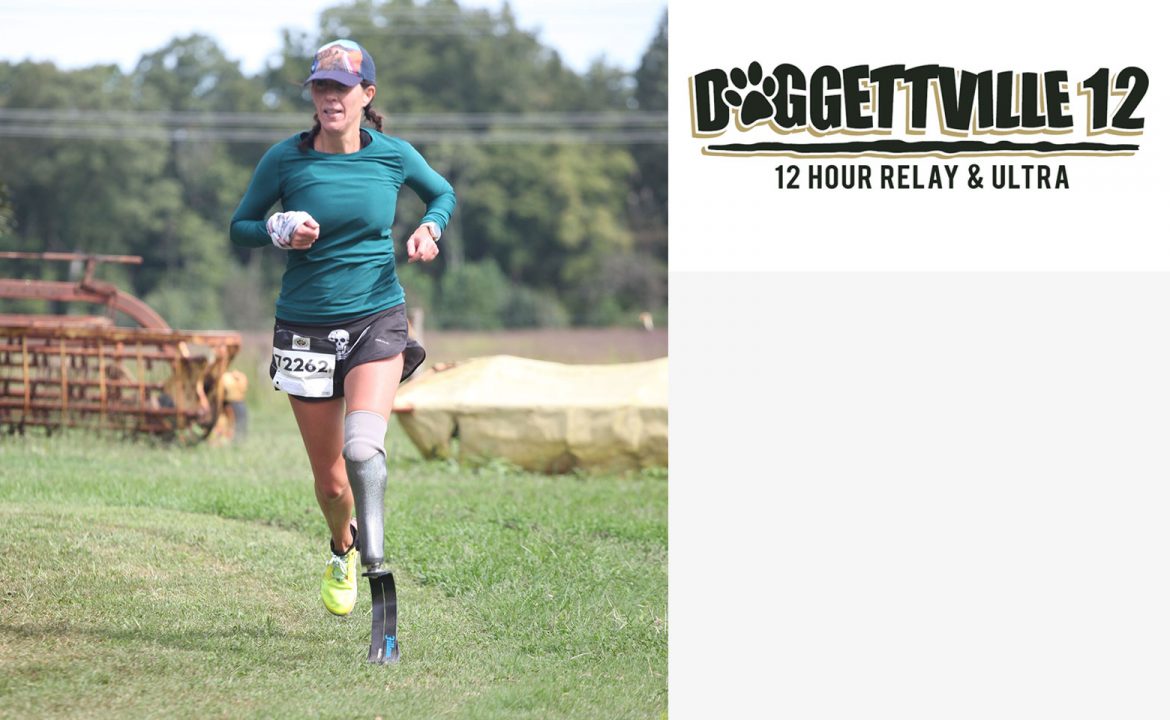 The Doggettville 12: Family Fun on the Farm

All of our races were canceled this year due to COVID-19, but a friend told us about The Doggettville 12 that was still happening in Summerfield, North Carolina. The race had two options: a 12-hour solo run and 12-hour relay option. My husband and I both wanted to race, but it is always difficult to find a sitter for our two young children. That’s why we decided the relay option in the Doggettville 12-hour would be a perfect solution.

The course is a one-mile loop over dirt, gravel, grass and pine needles. To ensure that there was always someone with the kids, we opted for a one-hour race strategy. In other words, I would run for an hour and then swap with my husband. We would each run for six hours. I was a little worried about taking the kids because 12 hours is a long time for them to be hanging around at camp, but they actually had a lot of fun. With so many things to see on the farm, this race is a fantastic family event. They fed donkeys, played with a puppy, watched horses and cows, jumped on a trampoline and caused havoc on the swing.

The race had all COVID-19 measures in place to keep everyone safe. With only 44 runners, the race crew made sure everyone’s temperatures were taken at registration and all tables were spaced out so we were far enough away from the other runners.

The start was at 7 a.m. with the loop starting on the road, then turning onto a gravel section which went slightly uphill. At the top of the hill, runners turned onto a grass path that went past a lake before entering a pine forest for a short run towards another short hill (although this felt like Mount Everest after being out there for so long) until we got to the horses. We took another right past some wildflowers and back onto a grassy section past one of the oldest oak trees in North Carolina (nearly 370 years old) towards the start/finish line. Before I knew it, my hour was up. The race even inspired my kids to run a few laps with me (7 miles each).

The race drew a few first-time ultrarunners and even though it was small, it was still super exciting because the men and women were battling for the top spot and trying to break the course record. The previous 12-hour men’s course record stood at 66 miles which was set by Andy Moore in 2019. Darian Smith came in first this year and broke the course record by 8 miles, finishing with 74. Hot on his heels was Danny McCormick, who finished with 73 miles and third was Keith Gruchacz with 69 miles. It was both Danny and Keith’s first ultramarathon.

The women were also fighting it out for the top spot in the 12-hour race. The first woman, Joanna Downer, finished the race with 59 miles, just short of the course record of 61 miles set by Miki Sato in 2016. In second place was Grace Hall, who finished with 54 miles.

This was our first race during COVID-19 and the biggest differences were the race precautions. Temperatures taken at the start, we all wore masks, tables were spaced out and there were no aid stations. This was not an issue, because we brought everything we needed with us. Race director John Doggett and his team made sure everyone was taken care of and it felt like we were part of the family.