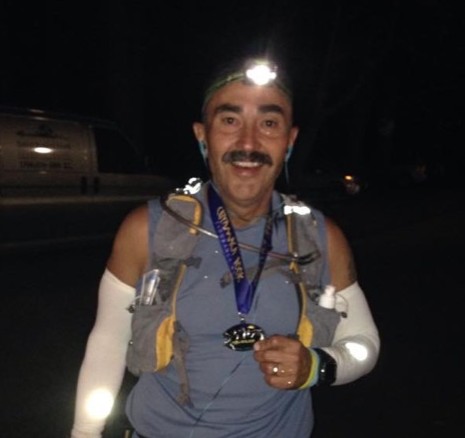 At 1:14 a.m. in the Cuyamaca Mountains just outside of San Diego, California, a small lone headlamp headed toward the finish line of the Cuyamaca 100K Endurance Run. The finish line was empty except for a few race officials and the director. Inside the finisher lounge the trays of now-cold food had been demolished from the previous 137 finishers. There was nobody left in there. As that runner crossed the finish line after 18 hours, 45 minutes, 50 seconds on trail – she was crowned the 2015 Tenacious Lanterne Rouge. Amber Christoffersen clicked off her headlamp.

“The designation Lanterne Rouge comes from the Tour de France, where historically (way back, when they raced into the dark of night) the last rider in the race carried a red lantern to indicate that he was the last one on the course,” wrote Wade Blomgren, dubbed “Timing Wizard Extraordinaire” of the race.

When Amber from Boston, Massachusetts hit her last aid station with seven miles to the finish – she really had to push hard to make the 1:30 a.m. cut off. She made it with fifteen minutes to spare really earning the “Tenacious.” It’s not known if she’s even aware of her achievement. She toughed out that steep, sun exposed, brutal course longer than any other competitor. I, and I’m very positive the other 137 who finished that night, salute her.

That’s the beautiful thing about this sport of ultra running. From the first racer to finish with crowds cheering, to the last person in with the the silence of a chilly fall night and the only sound is the click of their headlamp turning off – everyone across the field is respected. Thank you for making a sport for us stubborn bastards who may not be the most athletic, but who just simply don’t quit!

I was the course sweep that followed this courageous and determined lady into the finish…I promised she was going to cry and not for the reason she thought she would….she finished and she did. One well deserved finish that took her from DNF to a finish under her belt in great ultrarunning fashion!